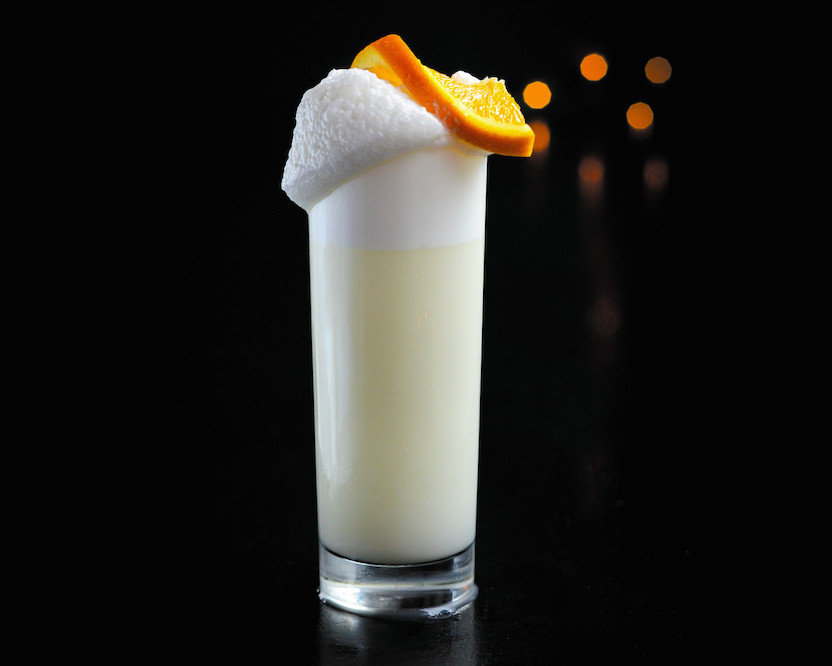 Jane Ryan explores the roots of a much-copied classic, the shake of which is subject to much debate.

Ordering a Ramos Gin Fizz is always seen as a bit of a dick move. It’s the drink we love to hate, and you’ve got to work hard to make a Ramos right. But even if it means putting your bartending pals through the ringer, can we talk about how damn tasty a good Ramos is? Sweet-tart, gently aromatic, refreshing and a visual delight topped off with that exquisitely frothy cap that rises above the glass like a boozy Pixar-animated cloud.

Just how hard to make is a Ramos? If you follow the inimitable sass that is Giuseppe González – former owner of New York’s Suffolk Arms and now working in Las Vegas’s Herbs & Rye – on Facebook you probably saw his opinions on this point, opinions that a lot of the global bartending community seemed to agree with.

“Ramos is the toughest drink to make. No. It’s not. You know why? You are making it wrong. It could be the toughest drink to make if you actually emulsified it perfectly. But y’all never do. You add the soda at the end and you get the rise of the head that is actually not a drink anymore because it’s solid. You turned it into food. It looks pretty but a Ramos that ain’t. That’s a pretty Tom Collins topped with meringue. I’m petty. I’m also not wrong. NOLA bartenders use hand mixers or blenders not because they are lazy... they just know what that drink is supposed to be. Stop the lies people.”

So what is a Ramos meant to be, what is the perfect emulsification when we’re talking about egg white and cream in the same drink, and can you get away without shaking it for the fabled 12 minutes?

Back in 1887 a chap named Henry Charles Ramos – who went, inexplicably, by the name of Carl – took over a saloon in New Orleans with his brother. By the 1890s business, as they say, was a-boomin’ as the city became an overnight tourist destination, probably because the mid-west was drying up. From a small and cute salon that shut shop at 8pm, Ramos’s bar was packed to the proverbial rafters, and everyone wanted the house fizz.

At the turn of the 20th century The Kansas City Star called the bar the most famous Gin Fizz salon in the world, adding that “Ramos serves a Gin Fizz which is not equalled anywhere”. That fizz combines gin and citrus with cream and egg whites. Individually those last two ingredients aren’t much of a problem, the Silver Fizz using egg white dates to at least 1883 and a Cream Fizz was doing the rounds shortly after. Ramos just combined the two, but together they need some serious muscle to emulsify.

Emulsification is pretty simple – to emulsify means to combine two ingredients which do not ordinarily mix easily. The ingredients are usually a fat and a water-based liquid and to combine they need to be beaten together vigorously, which suspends tiny drops of liquid throughout each other.

As we all know, Ramos’s bartenders weren’t required to actually give it some welly. Their delicate arm muscles were spared the task by the employment of shaker boys. At the 1900 Mardi Gras there were six bartenders on shift and six shaker boys, whose sole job was to, as David Wondrich so eloquently puts it in Imbibe “shake the bejeezus out it.” With business continuing to soar Ramos moved to a bigger venue and by the 1915 Mardi Gras he had up to 35 shaker boys a shift. Sources tell us these chaps shook their tins for 12-15 minutes, but that number increases with each re-telling and Wondrich estimates it was in fact about five.

We know the exact proportions of an original Ramos Gin Fizz because that good soul Henry Charles but-call-me-Carl Ramos gave up his formula when Prohibition arrived in the States. The recipe, as you can see, is quite light on bold flavours – begging the question: why does a Ramos taste so good? That would be thanks to the cream, which holds the flavours on the palate longer, ensuring we get all the sweet-tart goodness. These days the drink has become ripe ground for experimentation, both with method and ingredients. Let’s go back to that statement from González – “NOLA bartenders use hand mixers or blenders”. He’s not wrong, and they aren’t the only ones who have hacked the shake of the Ramos for less labour- intensive techniques.

Hand-held immersion blenders, milkshake spindles or wire whisk balls are common aides. They all help with the emulsification so essential to getting this drink right, something a tin shaker and some ice shards are going to find tricky. Let’s not forget Jason Crawley’s lean, green Imperial Shaker Machine which cranks a large wheel to send the tins into a seizure- like frenzy. Smaller, more portable ones are on the market too and in London were being used by Jonathan Downey’s Street Feast way back in 2014, where you could get a food-truck po’boy and wash it down with a perfectly shaken Ramos, all while sitting under a street heater in a Dalston carpark.

The now-closed Gentilly in NYC even used a bubble tea shaker made in Taiwan that neatly fitted two silver cocktail tins to do the job. So there’s no need to rely on your arms and laboriously shake away for 12 minutes hoping that it’s vigorous enough to cause the much-needed emulsification. It probably isn’t and at least with an immersion blade you’ve got a better chance of creating a stable mixture. It’s 2020 and we’ve got machines for that.

As for messing with the ingredients, the Ramos is susceptible to almost anything you chuck at it. There’s been Fernet Ramoses which are topped with cola rather than soda to play on that classic pairing, there have been been Ramoses topped with kombucha, root beer (NYC’s Seamstress) and even prosecco (San Francisco’s Whitechapel). Vegan versions have been experimented with too, using aquafaba and coconut cream.

The most loved of all the London versions has to be the now lost-to-us Koji Hardshake from Dandelyan, which may not have been served like a traditional Ramos, but a closer inspection of its ingredients would reveal it was very much part of that family. The cocktail, garnished with a toasted marshmallow, called for the following: 50ml blended scotch, 4 dashes liquorice bitters, 10ml cream, 30ml koji syrup, 15ml lemon juice 25ml egg white. It was firstly dry-shaken, then again over ice before being strained into a tall glass over ice.

The straining of this drink is what makes it visually different from the classic cannon of Ramos Gin Fizzes – it removes the whipped head and there’s no soda top to help get that all-important rise. What the Koji Hardshake did have was the weight and luxury of the cream and egg white holding the flavours and adding body, while the koji syrup brought out the fruitier notes of the blended whisky and the sweet spice in the background came courtesy of the liquorice bitters. All the joy of a Ramos without the faff of a puffy cap.

If you are attempting the classic with its lofty head, there are two key things to remember: don’t add too much ice when you wet shake, don’t strain it and don’t pour it into the glass from too high – the entire aim is to preserve aeration without deflating it. Good luck.

RAMOS GIN FIZZ
His formula, taken from the New Orleans Item-Tribune in 1928 reads as follows:

■ white of one egg

■ a little seltzer water to make it pungent

Together well shaken and strained