The Martinez - why this classic is misunderstood
by Jane Ryan / 13 December, 2019 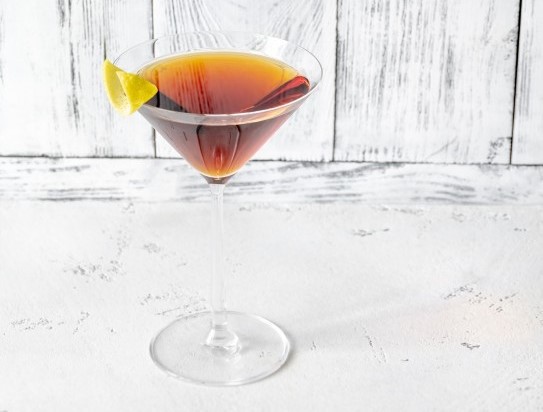 Of all the classic cocktails, the Martinez is perhaps the most unloved and misunderstood. The Mary Bennet of the cocktail family, if you will. It sits somewhere unfashionably between the two titans of the bar world – the Manhattan and the Martini – but has neither the clout nor the clarity of either.
Yet, putting flavour aside for just a moment, the Martinez’s story alone is deserving of far greater fame. After all, it’s the tale of how the first bartenders evolved the Manhattan into the Martini, and its history is exactly that of this most iconic cocktail, before it went dry. You can not have a world that exists with James Bond, Amalfi coast lemons at Duke’s and tableside service at Maison Premiere without the Martinez.
But before we kick off, there’s some important housekeeping to sort on sourcing gin and vermouth in the late 1800s in America.
Gin: in the late 1800s gin was a very different beast to the fresh, citrus-heavy, clear spirit fueling Britain on a Friday night. Instead it was malty, sweet and imported from Holland in wooden barrels, which would have gently aged it across the Atlantic. Once the 20th century was dawning, most recipes called for Old Tom gin, which was lighter and more mixable.
Vermouth: early recipes for the Martinez (or Martine, or Martini, or Turf Club… it’s gonna get complicated, hold on to your V-shaped glasses) all called for sweet, red or Italian vermouth, which was far more common than the drier French style.
OK, back to it.
First listed as a variation of its cocktail forerunner, the Manhattan, the Martinez bursts into history and on to the page in 1884 in OH Bryon’s The Modern Bartenders’ Guide. Before that year, we have no trace of a drink with this name or these ingredients.
However, as David Wondrich points out in Imbibe: “It’s possible that the first meeting of gin and vermouth was one of those momentous occasions that don’t seem all that momentous at the time; that everybody involved took their drinks, smacked their lips, and toddled on home without further remarking the occasion.”
If a combination was working in pre-Prohibition days, in this case spirit and Italian vermouth, then it would have been tried with just about whatever you could reasonably get your hands on, including whiskey, rum, brandy and gin. Any of them could have been the first, but whiskey proved the most popular.
Three years after its print debut, the Martinez made another, this time in Jerry Thomas’ Bartenders Guide, where the recipe calls for Old Tom gin, maraschino and vermouth. Some stories even say Thomas invented the drink for a traveller in San Francisco, however the 1887 edition which lists the Martinez was published two years after the granddaddy of cocktails had died. And we all know what an unbearable boast and brag he was in his lifetime, so it’s extremely unlikely he would have come up with the Martinez and never made a peep.
In fact, you can trace the Thomas-Martinez story to Beefeater advertising in the 1960s and no further, which makes it very unlikely to be true.

To muddy the waters even further there was a lot of confusion in the late 1800s and early 1900s between a Manhattan and a Martinez or Martini. Just how drunk were they if they couldn’t tell whiskey from gin? Well, those malty genevers from Holland were making it difficult to distinguish, and then there’s the matter of communication in an age without the internet. An interview from the Chicago Tribune at the end of 1883 highlights the problem perfectly, with a quote from a bartender saying “Manhattan cocktails are in demand, too… I introduced them some time ago, and they have become quite popular. They are made of vermouth and gin.”
And then there’s the further confusing matter of the anonymous book How To Mix Drinks. Bar Keepers’ Handbook from 1884, which lists a Turf Club (presumably named for the bar in New York) as made of Old Tom gin, maraschino and Italian vermouth, the same year as OH Bryon names the Martinez.
The point is, there isn’t a clear story of how gin and sweet vermouth came to entangle their lives. What we do know is as soon as tastes tilted towards dry, and French vermouth and London gin turned up, everyone forgot all about the humble Martinez. It just wasn’t as popular, evocative or glamorous as a Martini.
Getting its groove back couldn’t happen until vermouth started its heady ascent from maltreated cocktail ingredient to the hero wine we all realise should have been kept in the fridge these past
120 years. Whoops.
As the low-abv trend has soared, and craft gin distilleries have even made tentative stabs at palatable Old Toms, a new and improved Martinez has started gracing menus. No longer tied to the Martini, these days barely recognisable as family let alone close-knit siblings, the Martinez relishes its 2:1 ratio of vermouth to gin, showing off its astringent herbs, floral nose and sweet aftertaste, aided by that all-important maraschino liqueur. Most recipes now ask for a 75/25 mix of sweet and dry vermouth to tame its cloying mouthfeel as well.
Tellingly of our thirst for sharper tastes, a new breed of Martinez has also emerged, a Martinez Sour, which calls for the addition of fresh lemon juice and the cocktail to be shaken. It would go on to inspire Alex Skarlen’s popular Classic Ripoff at Experimental Cocktail Co, and many others besides. But at its best, the classic Martinez is a wonderful, full-bodied and flavoured lower-abv cocktail that is just starting to enjoy its time in the sun.