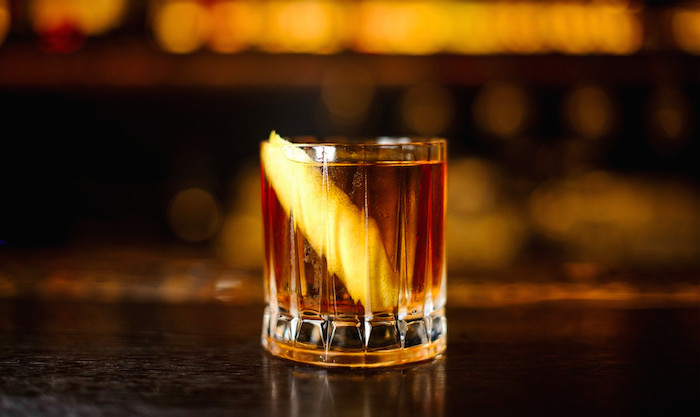 When did someone last order a Rusty Nail from you? I’ll wager it’s been quite some time, pandemic notwithstanding. There was a time when the Rusty Nail was a regular bar call, its heyday in the ’70s of slow scotch sippers, mustard-coloured carpets and flares, but this simple combination of whisky and Drambuie slipped off menus a while ago.

It’s a natural pairing, the scotch-based liqueur made with honey and herbs and its parent, if you will, scotch itself. There are few such perfect bedfellows in the booze world, perhaps armagnac and Floc de Gascogne or cognac and Pineau des Charentes are comparable but beyond that, not much. The bite and burn of whisky tempered with itself, dampening its own sharpness with the roundness and richness of Drambuie, is a formidable cocktail, and one that’s just as personal as a Martini. Too sweet – add more scotch, too strong – add more Drambuie until you find that perfect balance for your palate.

Drambuie originated in Edinburgh in 1908 but we don’t have evidence of a cocktail resembling the Rusty Nail until 1937, nearly 30 years into the liqueur’s existence as a commercial product. Knowing how much the locals of Scotland’s capital like a good drink, however, it would be unlikely that the combination was not sampled well before it was jotted down on paper.

That first debut, as far as history can tell us, was at a British Industries Fair held in New York, and consisted of Drambuie, scotch whisky and bitters, uninspiringly dubbed the BIF. The cocktail then pops up again in 1942, this time with links to artist Theodore Anderson for whom it was rumoured to have been invented. But give it another 15 years and suddenly the Rusty Nail was one of the hottest cocktails around, popularised at Club 21 in New York and rumours the Rat Pack adored it giving the drink wide appeal. “In the 1970s, I mixed many a Rusty Nail at the joints I worked in New York,” writes Dale DeGroff. “They were also a hit at PJ Clarke’s, a favourite late-night haunt of Frank Sinatra.”

What happened to catapult the Rusty Nail to stardom? Club 21 certainly lent a helping hand – it’s often wrongly assumed the drink was invented there so strong is its tie to the Rusty Nail. Club 21’s bartenders did invent another famous drink of the era though – the B&B, half Bénédictine and half cognac (brandy). The liqueur and spirit combo was evidentially popular at the time, and it’s in that ratio that the Rusty Nail was being enjoyed as well.

David Wondrich suggests that, once it was established in bars, the Rusty Nail didn’t disappear, rather it found its home outside of hospitality. “With its combo of swank ingredients (Drambuie ain't cheap), homey comfort (the liqueur and ice blunt any edge the liquor might have), and foolproof construction (there's really no way to mess this one up – if it's too sweet, just add more scotch), the Rusty Nail is to the classic suburban rec room as coffee is to the church basement,” he writes. So perhaps that’s where it lay dormant, sipped on sofas in middle America and gently argued over on which ratio is best.

Which is exactly why we’ve picked this drink to highlight as this magazine lands on your doorstep. It’s cold, you’re probably at home a lot more and stirred and brown and boozy is what we all need. But easy – we need throw-it-together in a glass with ice and that’s enough faff kind of easy. We need a drink you can sweeten and temper for some friends and family and dry out for others. So my question is – have you tried a Rusty Nail? It’s awfully good, and awfully simple and I’d wager it’s so out of fashion you probably haven’t, at least not in a very long time. Don’t forget the fat lemon zest.

As a simple two-ingredient cocktail it has spawned a thousand riffs, with an increasing ridiculousness to their names. A Galvanised Nail adds elderflower, apple and lemon. A Brazilian Nail adds cachaça but keeps 15ml of the scotch. A Rusty Compass uses peated Islay whisky and adds in cherry brandy, while a Tapered Nail also uses an Islay malt but adds rum. A Rusty Spike uses bourbon instead of scotch. A Chinato Nail... well you get the idea, it’s with Chinato. Really, there’s a very loose definition for the drink and an anything-goes attitude so long as Drambuie is somewhere in the mix, making it even more the perfect drink of the season – homely, flexible with your cocktail cart and long overdue for a comeback.

How to make: Dump everything into a glass with ice and stir. No ice? Add the ingredients to a glass with 10ml of water, stir and pop in the freezer for a good 30 minutes. Top with more whisky or Drambuie, depending on your palate.