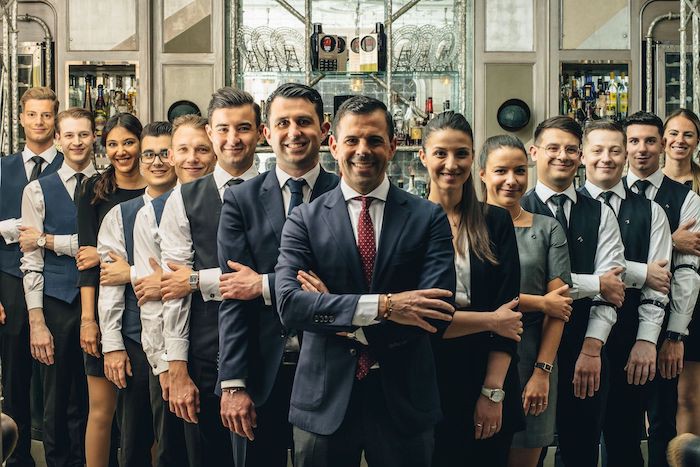 Connaught Bar from London was named the World’s Best Bar for the second year running in The World’s 50 Best Bars list, which was unveiled at the annual ceremony at Roundhouse in London tonight (December 7).

The David Collins-designed hotel bar led by Ago Perrone, Giorgio Bargiani and Maura Milia, made its twelfth appearance in the list – a joint record - while Monica Berg and Alex Kratena’s Old Street bar of two parts Tayēr + Elementary climbed three places to be named runner up.

The bar industry’s most coveted awards is organised and owned by William Reed, and voted for by an Academy of 600 bar industry experts.

In a year marked by big changes to the list – 20 bars changed this year – the top 10 was the most geographically diverse it’s ever been, with nine cities represented.

Giacomo Giannotti's Paradiso, a speakeasy-style bar with Dali-inspired decor in Barcelona, shot up 16 places to third - the joint-highest ranking achieved by a bar from outside of the traditional cocktail bar hubs, London and New York.

Vasilis Kyritsis and Nikos Bakoulis’s all-day cocktail venue The Clumsies in Athens followed up last year’s top-five finish, coming in fourth, while it was another strong showing from Renato Giovannoni’s Florería Atlántico – a hidden bar, entered through a florist in Buenos Aires’s former docks – which came fifth.

This year, 17 countries contributed bars to the list, led by China and Singapore, both with six venues each.

The US is home to four bars in the 50, while ¬¬gains have been made in Spain, Mexico and Australia, which each contribute four.

Often the country with most bars on the list, the UK has a much-reduced presence this year, down from eight bars to three.

As media partner to The World’s 50 Best Bars, Drinks International has published the official guide to the 2021 list as part of its Global Bar Edition, which launches digitally tomorrow (Wednesday 8 December).

44 Above Board, Melbourne, Australia