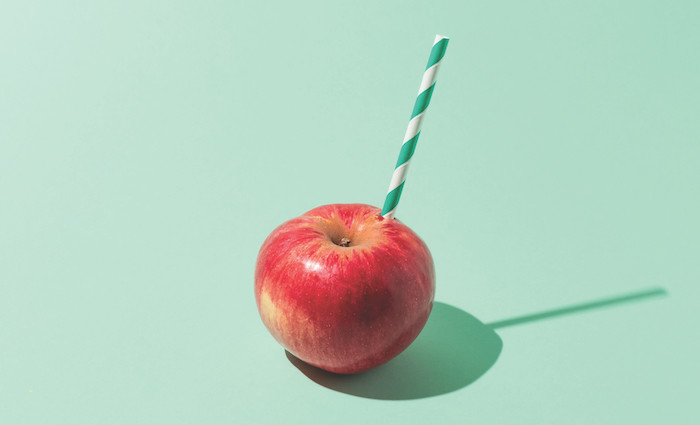 Imagine buying a bottle of French wine, assuming – because you just know this stuff – that it’s made from the fermented juice of wine grapes. Imagine the label reassures you that this wine is indeed made from French wine grapes. Then imagine finding out – maybe from an industry whistle-blower, or you have the wine tested in a laboratory – that the main ingredient in the ‘wine’ is water, and that only 35% of it is grape juice, which has itself been watered back down from juice concentrate?

Doubtless, you would think less of the wine. I’m guessing you’d feel ripped off. Such a revelation would surely be a scandal that would rock the global wine industry.

It’s not true, of course – wine isn’t made like that. But the cider that most people in Britain are drinking just now is. In fact, it can be reasonably argued that most of it isn’t technically cider at all.

Once, cider was a seasonal product – apples can only be harvested once a year – and cider production was small-scale and farm-based. A farmer would make it when they had the apples, and the drink would reflect the character of that year’s harvest. But in the 1960s and 1970s, some of the bigger farms won lucrative contracts to supply pub chains and supermarkets. They needed to be able to supply cider all year round, so they began to concentrate the juice into a thick paste for storage, reconstituting it by adding water back in whenever it was needed.

This created a consistent, homogenous product, which in turn allowed cider to grow even bigger. The problem – from a cider point of view – is that when your business is heavily reliant on one or two massive customers, those customers hold the power. They can progressively demand lower and lower prices, or threaten to discontinue your product. Once your margins are razor-thin, you can only meet the new price by cutting costs. And if you’re a cider maker, the only way to cut costs is to put less apple juice in your product.

Legally, cider makers are under no obligation to declare how much juice their product contains. But in 2010, a legal minimum juice content was established in cooperation with the National Association of Cider Makers – an industry body consisting of big national brands that doesn’t allow small, artisanal makers to join. These big supermarket suppliers decided that, in order to be called cider, a product must boast a minimum juice content of… 35%.

The rest can be water, sugar, caramel and other colourings or flavourings. Meanwhile, the consumer is left happily believing they are drinking fermented apple juice.

A mere 35% may not sound like much, but the truth is it’s probably even less than that, thanks to the leeway producers have in reconstituting juice from concentrate.

“The key measurable component in juice is the Brix scale, which measures sugar content,” says Gabe Cook, formerly an employee of the world’s biggest cider maker, Bulmers – now part of Heineken – and now the self-styled ciderologist, the UK’s leading cider educator and evangelist. Brix is key for cider, as the sugar content determines how much potential exists for alcoholic fermentation. Apples clock in between 10 and 17 on the Brix scale, and in the UK, commercially sold apple juice must be at least 11.2 Brix. But the apple juice used for cider need only be 8.2 Brix – which you only get if you reconstitute your ‘100% apple juice’ with more water than you initially extracted from it. “This means the juice which some ciders are made from couldn’t even legally be sold as apple juice here in the UK, or anywhere else in the world,” explains Cook. And this is what counts as ‘apple juice’ when your cider only contains 35% of the stuff.

“If apples aren’t the main ingredient, then surely it’s not cider,” argues Cook. Some of these cider-flavoured drinks aren’t even taxed as ciders: erroneously named ‘fruit ciders’ such as Kopparberg and Rekorderlig (which list their main ingredient as water) are technically ‘made wines’.

None of this would matter if consumers didn’t believe they were drinking something made from apples. It seems likely that mandatory ingredients labelling will extend to cider in the near future, with Strongbow already voluntarily listing its ingredients on the label (top of the list: water.)

In the meantime, big producers, when exposed, will protest that 100% juice content is no guarantee of quality. This is true: if you’ve ever tasted truly awful scrumpy it almost certainly had a far higher juice content than Strongbow or Bulmers. But as a general rule, the higher the juice content, the more structure, complexity and depth the cider has. Until the rules change and makers are forced to reveal their juice content, there’s one way to find out: ask a cider producer how much apple juice their product contains. If it’s north of 70%, they’ll probably tell you proudly.

If it’s below 50%, they almost certainly won’t.