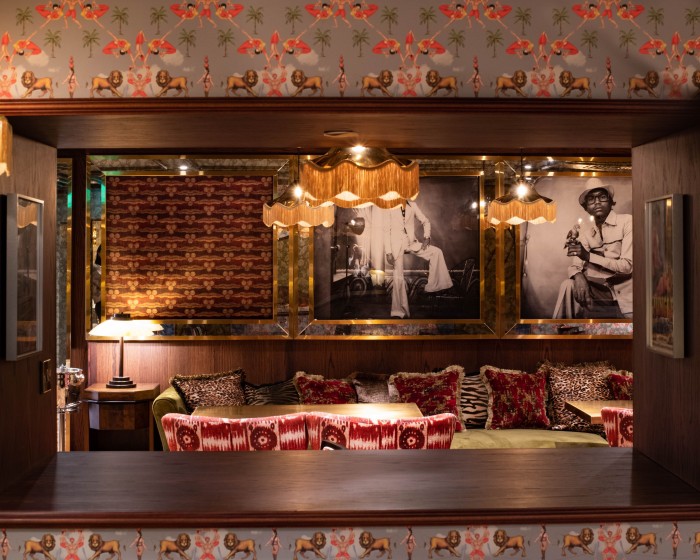 Bandra refers to a suburb of Mumbai, and as a homage to the area’s clandestine bars in old Bombay, the cocktail bar is only accessible via a concealed staircase at the back of the newly launched restaurant.

The gaudy interior of brown glass lampshades, velvet sofas, leopard-print pillows and posters of moustachioed men, was designed by I ME AM Design, with every element shipped directly from India.

Bandra Bhai’s head barman Dav Eames, who has rounded off a decade heading up everything drinks-related for Marcus Wareing, has created a cocktail menu that twists classics towards the style without falling for gimmicks.

"The cocktail list complements the tongue-in-cheek concept behind the venue itself," said Eames, speaking to Class. "Nods to the 70’s era and the underground smuggler's dens that were fronted by sexologist or photo studios in the harbourside area of the Bandra neighbourhood.

"I imagined conjuring drinks in such a place with ‘smuggled’ bottles of cognac or whiskey or whatever was changing hands and utilising the local ingredients I had around me to create twists on classics and brand new creations."

Highlights include Gaba Singh Side-hustle, a sidecar inspired homage to the iconic villain of Indian cinema with cognac, fresh pineapple, celery, almond and lemon. Rajdoot, a twist on the Vesper martini with vodka infused with cassia bark, samphire and sage, and Disco Inferno, a tribute to the king of Indian disco, Bappi Lahiri, which combines cardamon-infused Belvedere with chilli spiced mango and lime.

The beers are a selection from lesser-known Indian brewers and a Champagne list includes the likes of Devaux’s Grande Réserve, Rathfinny, Dom Perignon, and Krug.