Birth of a classic: the story behind the long-awaited Schofield’s Bar
by Hamish Smith / 18 May, 2021 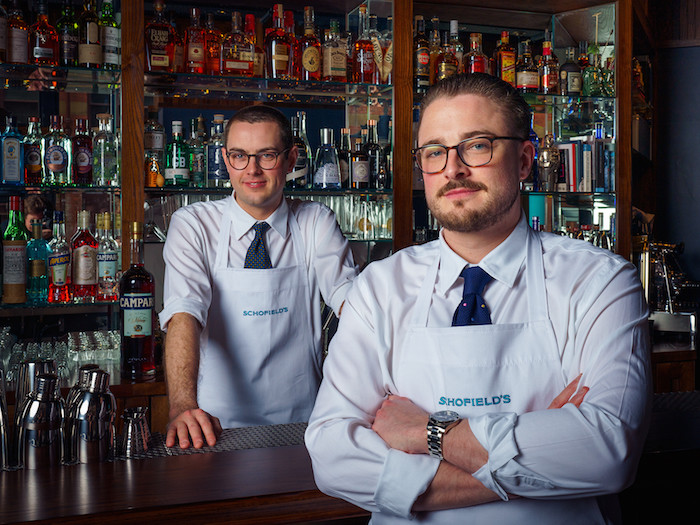 Schofield's Bar was the world-famous venue that didn't exist - until now. Hamish Smith takes the two-hour train from London to Manchester to finally take up a seat at Joe and Daniel Schofield's much anticpated debut bar.

Can you remember when you first heard about Schofield’s Bar? It’s hard to fix the time. Perhaps when you saw the logo on social media, or heard about Joe and Daniel Schofield’s eponymous consultancy, or were served a drink by the pair guest bartending in snazzy branded aprons.

There was the launch of Schofield’s vermouth – runner up at the World Vermouth Awards – and not long before a cocktail book: Schofield’s Fine and Classic Cocktails. Later came snippets of information about the site of the bar, which built up to the Classbarmag.com exclusive pre-launch story, and a line of Schofield’s bottled cocktails.

Over a period of more than two years, each spin-off added incrementally to a quickening churn of chatter. To the point there were few at the connected-end of the bar world who weren’t aware of Schofield’s and probably fewer – outside of the UK anyway – who hadn’t realised it hadn’t opened. Consider that: a world-famous bar that didn’t exist. Until, that is, this spring.

Such a prolonged build-up wasn’t ever the outset plan. Behind the brand-building, Daniel and Joe Schofield were working hard to find a site to open their bar. There were venues that came close and fell through, and when they finally found their site, the pandemic was raging. The latest lockdown delayed opening their doors further. “It was a long road for us – a hard road – with people doubting our decision making,” says Joe. “We held on for what we wanted.” 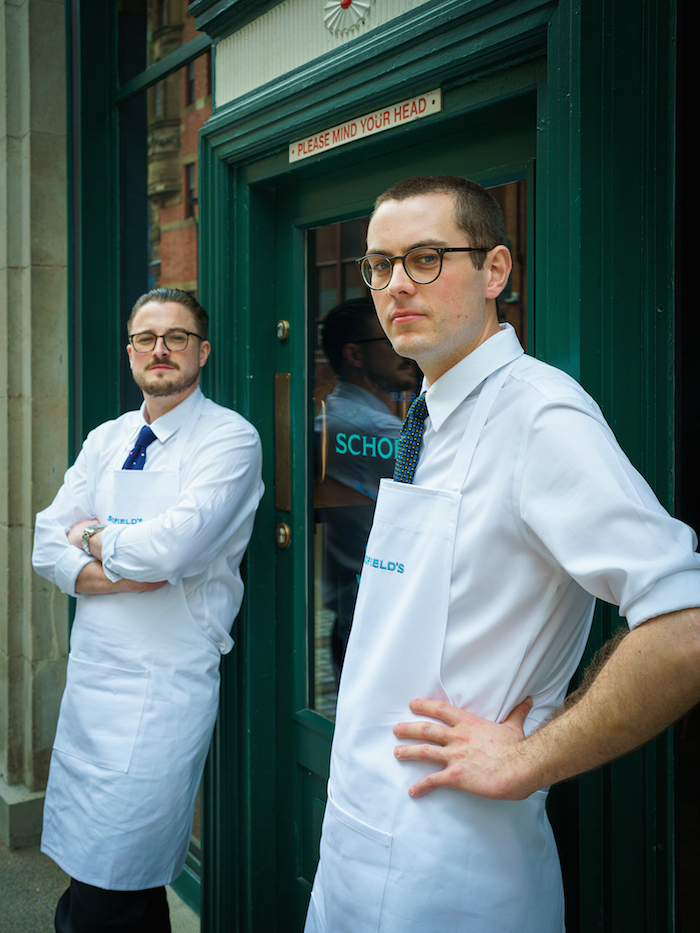 And they got it. Set on the ground floor of the Art Deco-styled Sunlight House on Little Quay Street, the building was a flagship 1930s design of architect Joseph Sunlight. In later life it became The Old Grapes, a pub owned by actress Liz Dawn (Vera Duckworth from Coronation Street), frequented by local celebrities – it seems impossible for a site to be more Manchester. Added to that history and period trimmings, it has a terrace for the times and the kind of lease that could make this a generational business.

And Schofield’s – even on a cool April afternoon, without the thrum of guests that the takeaway queues would suggest are coming – looks the part. The arched, period entry leads you into a two-level space, which is dominated by a long wooden bar. Illuminated by low-hanging lights, the navy blue walls, brass fittings and flashes of ‘Schofield’s green’, it is every inch the classical look.

It’s possible the Schofields are bigger names in the global circuit than they are here in the UK. Their CVs are punctuated by stints at ‘galactico’ bars and Joe’s individual honours from 50 Best and Tails (Bartender’s Bartender/Best International Bartender) and have a way of getting you noticed. It’s for this reason Schofield’s opening is internationally big news. Even juicer that the capitals of bar-world hype were eschewed in favour of opening in their hometown. In truth, nowhere else was on the cards.

“It was always going to be Manchester,” says Daniel. “It’s our closest big city, having grown up on the outskirts. We love the bar and restaurant scene here and we’ve always found that northern people have such a genuine sense of hospitality – it’s good to be home.”

Whether Manchester wants it or not, the global brand ambassadors, the international writers, the 50 Best Bartenders and the cocktail tourists – the circuit is coming to town. And when I tell this fortune, the Schofields laugh – they know this world, the glamour and the opportunity. They laugh because they know a bar is a business first – it is nothing if it isn’t engaged locally – but also because traditionally big-name bartenders are more likely to board a plane than a train. “We’ve spoken to quite a few people who’ve even expressed an interest in jumping on that two-hour train,” says Joe, wryly.

The brothers are proud of their city and are determined to show it off. “People are excited to see Manchester,” says Dan. “Even with the challenges of the last year, Manchester hasn’t slowed down – in terms of development, it’s the fastest growing city in Europe right now. We’re really happy to be a small part of it. But it’s not just the F&B scene, Manchester is known all over the world – not least for its music and football.” Forever the diplomats, the Schofields won’t be drawn on red or blue. “When we were younger we supported Bury,” says Dan. 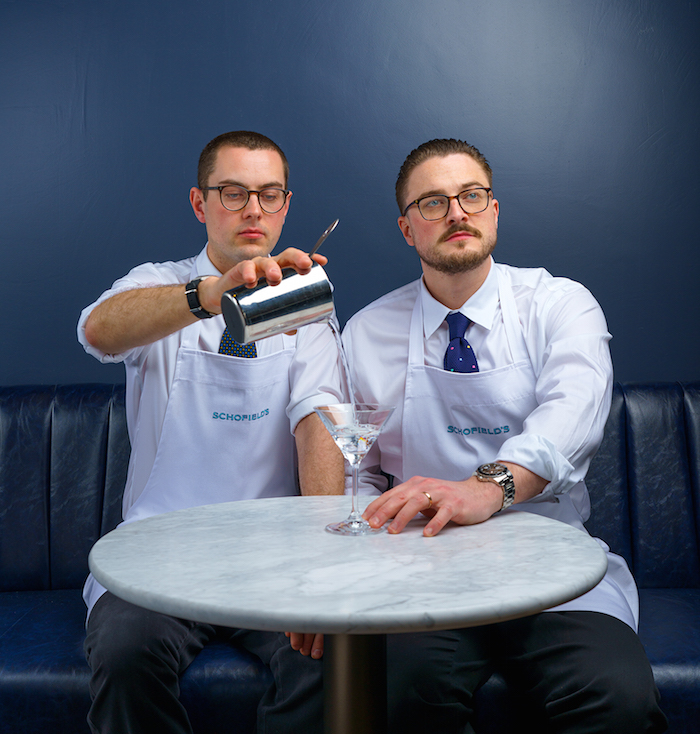 Growing up in Bury, had things gone another way the brothers might have ended up in a different family business. Their father is the fourth generation to run a fire protection company that started out in life 120 years ago and serves the Greater Manchester region. If you ever wondered about the placement of the apostrophe in the bar’s name – which indicates one, not two Schofields – the original company was named Schofield’s after their great grandfather.

“The branding is inspired by our great grandfather’s company, Schofield’s,” says Joe. “We’re the first generation to not go into the family business, so we used the family logo, which is over 100 years old. We love that apostrophe – even if there was a social media backlash about it,” he adds, smiling.

Fire safety never had the chance to be their calling – the bartending bug bit early. The brothers worked in pubs and nightclubs and both dropped out of university to pursue careers in hospitality. “It was Jake’s Bar that made me fall in love with hospitality,” says Dan. Joe had spent time there too and also points to the influence of Jake Burger and Ricardo Dynan, while the pair would later work side by side in Manchester at Lyndon Higginson’s Liars’ Club.

Though on different paths, they would take research trips together to check out bar scenes – London to experience seminal venues such as Milk & Honey, but also Paris, which eventually led to Dan joining Little Red Door. From there it was London, most notably Coupette, while Joe’s career saw him travel to Sydney to Palmer & Co and the Rockpool Group in Melbourne before back to London. Joe says his highlight in the capital was under Declan McGurk’s mentorship at The American Bar at the Savoy. From there it was Tippling Club in Singapore, where he became an internationally recognised name.

Bartending offered the pair many things, but not regrets. “We’ve never looked back – we’ve travelled the world,” says Dan. “It’s an incredible job,” says Joe. “I’ve climbed the Great Wall of China, trekked through the Amazon to find new botanicals, starred in a short film and written a book – these are all things we don’t take for granted.” Yet, all this time – perhaps as long as 10 years – a plan was afoot to lay down the suitcase and reunite to open a family bar.

A sum of their experiences

Schofield’s Bar is less the cocktail bar, more a bar that is the sum of their experiences. “We’re passionate about all aspects of beverage – we never wanted to open just a cocktail bar,” says Joe. “It’s always baffled us that our industry focuses on cocktails rather than everything else that makes up so much of your sales. We took a lot of inspiration from legendary bars of the past – the American Bar at The Savoy, Harry’s in Venice and Paris,” says Joe. “So, while we serve great cocktails, we also have a great wine list, spirits selection, draught beer and British tapas with great local charcuterie and cheeses.”

These days, inclusive is the new exclusive. Schofield’s aims to cater for “anyone and everyone”, with a more “high energy experience” at the bar, a “relaxed table service” area, and a terrace outside. The 12 classic cocktails they chose aren’t dusty relics but crowd pleasers. There’s the Bellini, Bloody Mary, Clover Club, Daiquiri, Gin Fizz, Irish Coffee, Martini, Manhattan, Negroni, Old Fashioned, Penicillin and Sazerac. There is no lab equipment in sight.

The brothers are confident their classical, no-gimmicks approach will find its market in Manchester. “There are a lot of discerning drinkers here – people that love great drinks and venues,” says Joe. April’s trading suggests he is right. “We’ve been selling as many Martinis as I used to make at the Savoy,” says Joe, “the Cognac Sazerac is one of our most popular drinks and the Negronis have been flying out.” 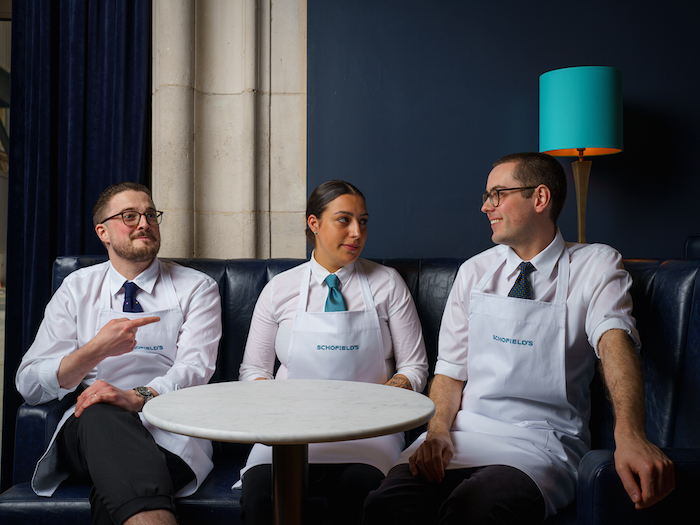 The promise that one Schofield brother will always be in residence at Schofield’s says a lot of the family business, if not their family holidays. But their operational presence hasn’t stopped them appointing a head bartender, Rachel Orange, who joins from Hawksmoor Manchester and was a former head bartender at The Alchemist. “We met Rachel two and half years ago, introduced through Pippa Guy,” says Joe. “We can’t speak highly enough of her. She’s been so patient with us in the run-up to opening.”

Orange certainly appears a good fit. “I’ve always loved classics,” she says. “There’s a reason those recipes have stuck around for such a long time. I want to be able to give people the best version of those drinks and I’m an enormous fan of our house Martini.”

Ferdia Murray also joins from the American Bar to be assistant head bartender. “It means a lot that Ferdia is willing to move from an institution like the American Bar to our family business,” says Joe. With two more bartenders and more recruitment already underway, the family is growing.

So, could Schofield’s be a classic bar of the future? “We’d love to one day pass this bar on to our kids or grandkids,” says Dan. In truth, time only knows, but the foundations have been laid to last, the brand is strong, and the intention is most certainly there.