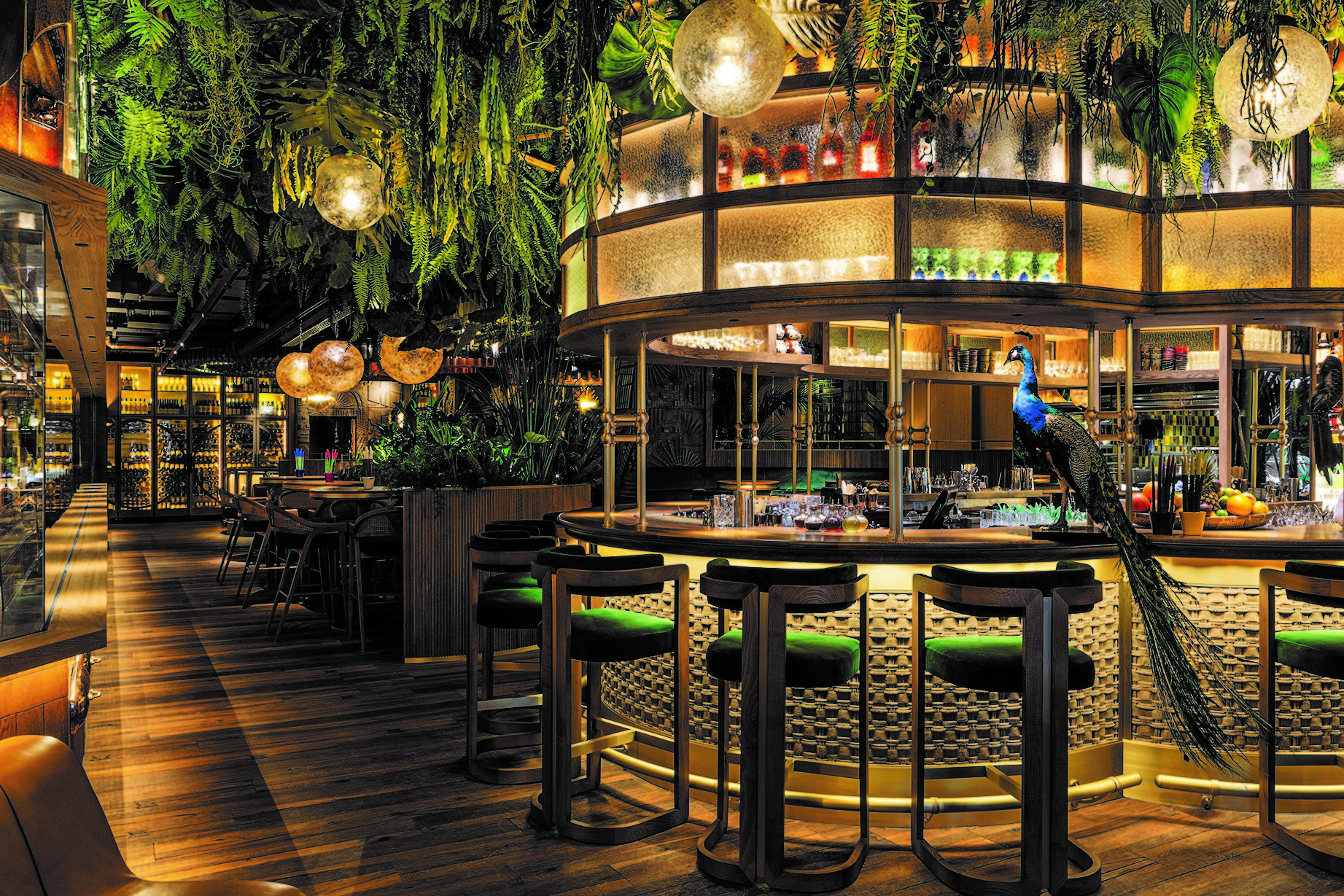 A rainforest-themed bar in Mayfair? The eyes are rolling, but actually, it pays to keep an open mind, says Hamish Smith.

On one side of our industry, bartenders are making cold-process citrus soap, composting coffee grounds, foraging for mulberries and fretting over carbon footprint, while in Mayfair, they’ve built a rainforest-themed restaurant bar. I mean, not to get too bogged down in the sustainability narrative, but the first impressions of Amazónico don’t include environmental consciousness. All that to one side, there’s another reason you might be judgmental of this behemoth extravagance, and that is the everyman’s favourite prejudice: inverted snobbery.

Disparaging the rich and their habits of trumpery is a trap we fall into eagerly. But does it follow that because you’re a cosmetic injectee, whose Tibetan Mastiff owns a Maserati, you have awful taste in bars? Brenda and I went to Berkeley Square to find out.

But first the spiel: taking inspiration from the gastronomic heritage of the Amazon region, Amazónico is the Madrid-borrowed concept by husband and wife team Sandro Silva and Marta Seco, partnered with Dream International, the restaurant group behind the likes of Coya and Zuma.

At the entrance of Amazónico there’s a collective noun of dressy types, fluffing their plumage and trilling like macaws. The doors open up to a half-dozen hostesses dressed in marine green, poised with alacrity. Words labour where photography makes easy work, but the scene is arresting, in a way possible only with a bottomless budget. The first rule of bartending is that you cannot create a rainforest bar on the cheap.

At first, the circular, two-tiered bar, which doubles as the perch of an arrogant peacock, makes you think the drinking space is an adjunct to a dining lounge, but actually, it’s the enter-piece – not the centrepiece – to this sweeping lounge-bar plain.

Lining the left perimeter is a glass wall of the sort you might find in the spider enclosure at the zoo, offering an interrupted panorama of a slender, protracted kitchen. Exotic hunks of meat (most possibly tapir) are turned through open fires and pineapples are spit-roasted in a vegetarian’s torture chamber. Swing round to the right and you realise you’re only in half of Amizónico. There’s a huge restaurant, more kitchen – this time with Peruvian sushi – a jazz band and more seats and booths. Amazónico has a floor space of 13,000sq ft – 10 times the footprint of an average three-bedroomed house.

We’re shown to our table and from then on service is sharp, through a drilled army of smart-looking staff. While we wait, attention is piqued by an enthusiastic DJ playing jungle-techno, with squawks and other sounds of the forest extending from his decks through to the toilet speakers. But before long the Amazonegroni (£14) lands, with pineapple-infused Canaima – a gin featuring 10 Amazon botanicals – vermouth de Jerez, Campari and sesame. Against the odds it works – a little too well for a Negroni purist. If doses are judicious, sesame can be delicious.

Joining it was Monkey Business (£15), served in a porcelain monkey head. Mood-lowering memories of The Parrot bar at the Waldorf flood back, except this monkey had something worth talking about between its ears. It’s true, bee-pollen infused Bulleit doesn’t shout Amazon, nor does lemon, but corn, ginger and banana brought richness and harmony and took us back to the tropics – a silly mug of serious liquid.

The food, drafted in from the Amazónico Bites menu, took us beyond the river banks to the wider Latin America basin, to Patacones Mechados (£15): stacked hashes of plantain, pulled pork and scarlet red achiote seeds, which was rich, unctuous and lifted by lime. The king of the jungle, though, was the Zapallo y Jicama Tacos (£13) – roasted Peruvian pumpkin, cream cheese and fresh turnip, which had been mandolined into taco shells, adding a fresh, if a little perspiring, saucer for the soft-centred pumpkin. Great cooking.

Round two arrives. El Litoral (£16) was big on scotch – The Balvennie 14 Caribbean Cask, Talisker 10, corn-infused Cocchi, chocolate, banana and tobacco bitters – a Rob Roy lost in the tropics, with leathery flavours and velvety texture. The Sangria Blanca (£15), with Porter’s Tropical gin, aguardiente, tropical fruit wine, white port and aloe vera, glowed like a deep-sea jellyfish, but despite its rabble of constituents displayed an acrobat’s balance.

With the bill silently mounting, we brought a halt to proceedings. These cocktails, based as most of them are on classical foundations, are not cheap, but they are definitely very tasty. In two hours of entertainment, Amazónico barely put a foot wrong. We left with wide smiles and revised opinions. Amazónico may live in a bubble of its own absurdity, but if you can leave the hang-ups at the door, high-class entertainment awaits.