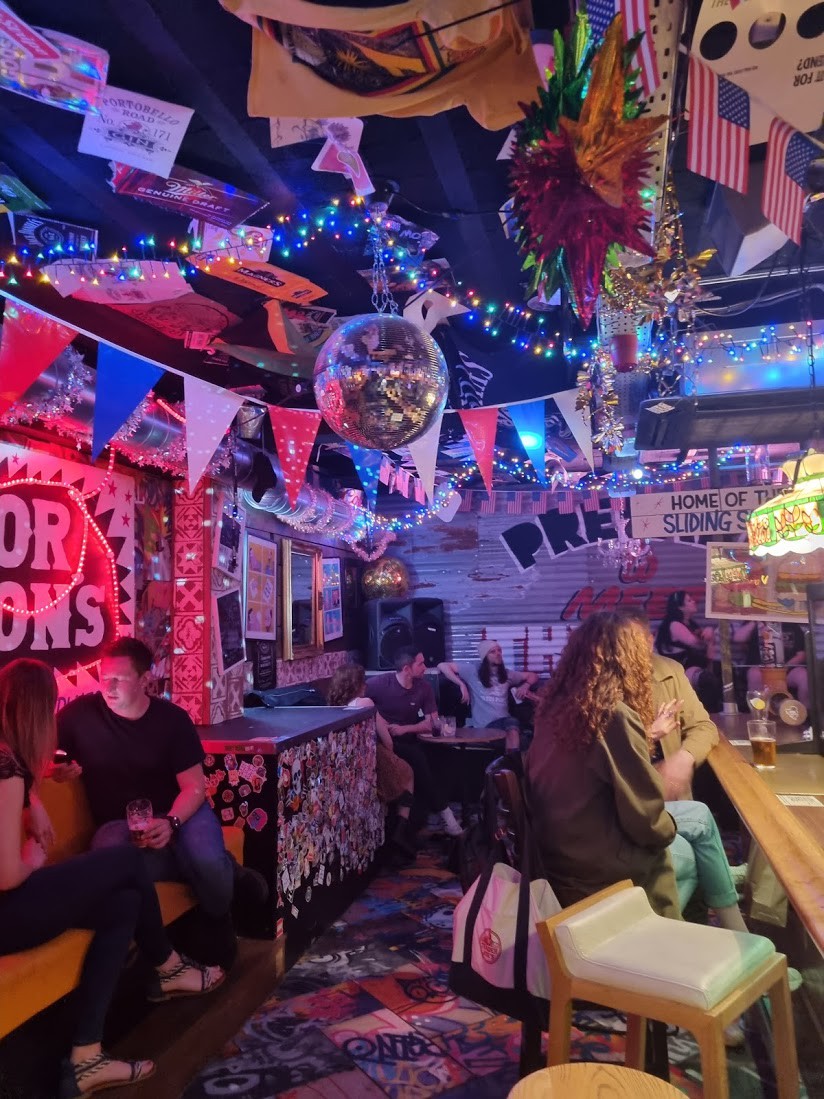 Does the idea of an American dive bar work outside of its homeland? Hamish Smith reviews Junior Jackson’s in Manchester

The American dive bar isn’t easy to define, except to say you know one when you’re in one. In my mind’s eye they are dark, illuminated by neon signs and glowing fridges of cheap American lager. There’s whiskey with an ‘e’ and wings, whether it’s 3pm or 3am – not that time is much of a guiding construct.

In the dive bar’s grimy, at times shady, nature, there is paradoxical appeal – they’re stale but somehow nourishing. The clientele can be cliquey, yet these are everyman places. Perhaps there is comfort in the knowledge you can be yourself or, as American drinks historian David Wondrich puts it: “A dive is a bar where nobody judges you, but you don’t get to judge either.” There is little structure – the experience is what you make it. You might call it a laissez-faire approach, just not when you’re in one.

But that’s there. What about here? The reason dive bars aren’t a tradition on our shores is that there’s never been much of a need for them. If we want grime, we have the pub, the boozer, the local. So, can the dive bar be recreated in Britain?

If anyone can do it, captain of concepts Lyndon Higginson can. Indeed, most of his places, while not being dives per se, pull on their most seductive elements – easy drinking, food you want to eat rather than talk about, and décor as busy as the atmosphere. But when Bunny Jackson’s arrived in 2017, it went full dive. Named after a toothless harmonica player Higginson had met in New Orleans, it has a motorbike, fairy lights and a stage surrounded by chicken wire. No easy thing – as Higginson’s partner James ‘Bart’ Murphy says: “It takes a lot to make a place look so knackered.”

This year, Higginson, Murphy and Mat Lake proffered their sequel: Junior Jackson’s on Manchester’s Oldham Street, in the basement beneath the operators’ own Lost Cat. Smaller than its cousin, Junior Jackson’s might even have dialled up the dive.

You descend – symbolically and historically important (the first dive is believed to have been a basement bar in Buffalo, hence the name “dive’) – finding a long, ordinary bar lit by chintzy plastic Coca-Cola lampshades. Opposite are raised booths, around which the walls are thick with stickers: Higginson’s trademark wallpaper. Stars and stripes bunting hangs from the ceiling, almost swaying to the juke box bluegrass. The bar has beers on tap and beyond them raised fridges of American lager, above which are oxen horns and a rotating display of about 60 American whiskies, not that anyone is counting.

In recreating the look, there is always the danger of Disneyland dive, where everything appears right up front, but doesn’t have a behind. There is the inventory of expectedly themed props, but they seem genuine, and like any real dive, there are bits and bobs that don’t make sense. Areas of the bar that happened and stayed like that – one of the booths has a metal-framed outdoor umbrella randomly hoisted above it and there are piles of kegs at one end of the bar, with tubes and bladders attached as if in hospital, mid-operation. There could be a few more unhinged doors and a little more gaffa tape, but there are fine nonsensical signs that clearly signal dive (one reads: We got wings… tomorrow) and critically the décor doesn’t feel new. Here is a bar that is less than six months old, but somehow already bears wrinkles. 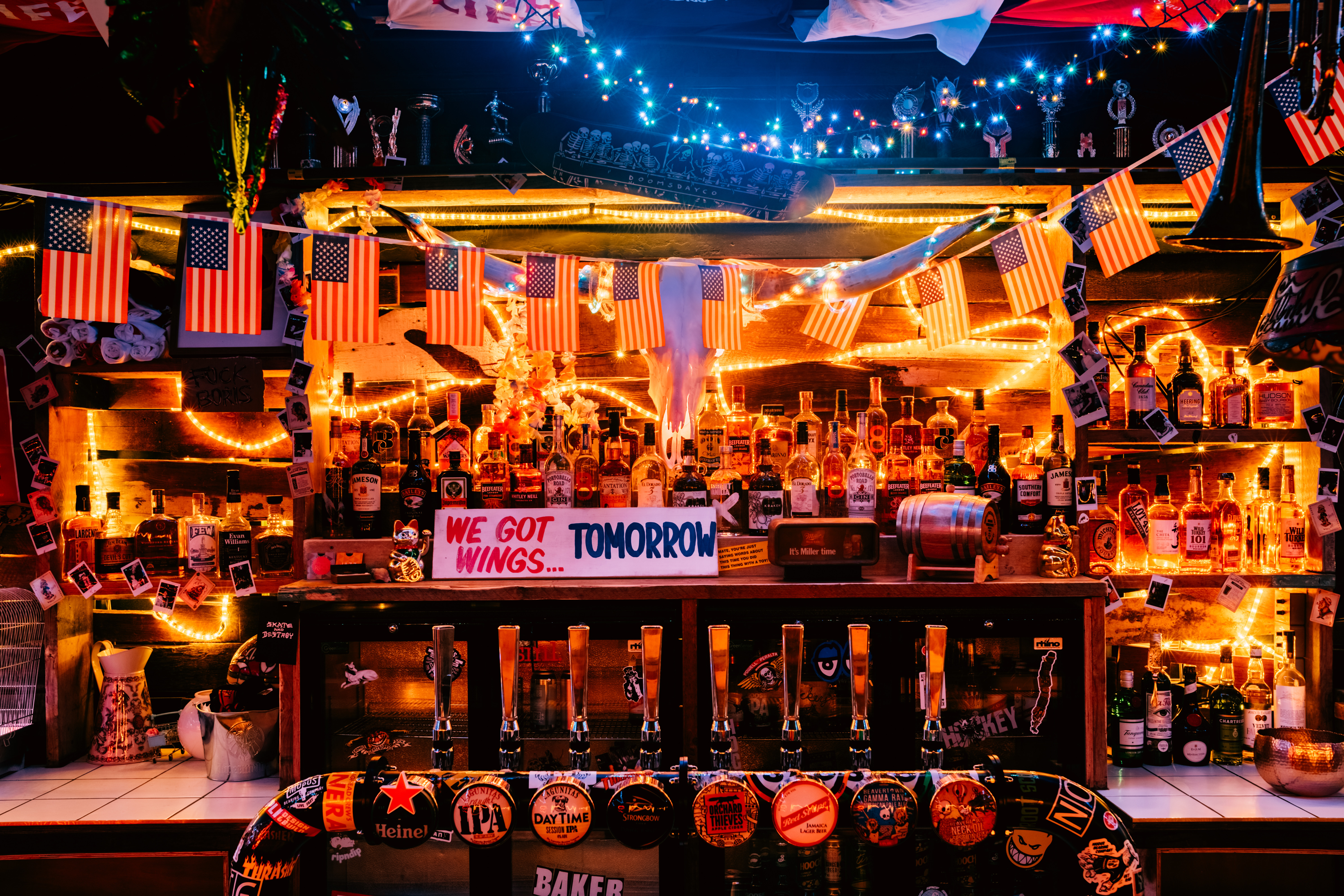 So, does Junior Jackson’s deliver the dive bar experience? For a routine Wednesday night in Manchester, by 9pm the place is busy. The booths are filling, there are some standing and when a place at the bar opens up, people, like unthinking zombies, stagger towards it.

The Miller lager, all cold and neutral, is incapable of diverting the conversation – just as it should be. It arrives by as few words as is possible, and without many more, a measure of whiskey. I’m not entirely sure what bourbon it is and, given its fleeting appearance, it doesn’t really matter.

For a moment, I consider branching out. As most dives attempt, Junior Jackson’s does cocktails: Sazeracs and Old Fashioneds are £8, plus £1 sliders that slide toward the bar through a shoot in the ceiling – inspired. But instead, “same again” seems easier. Besides, according to Higginson, “the beer’s the best thing we do”. But it’s not. What it does best is dive bar – and I know when I’m in one.