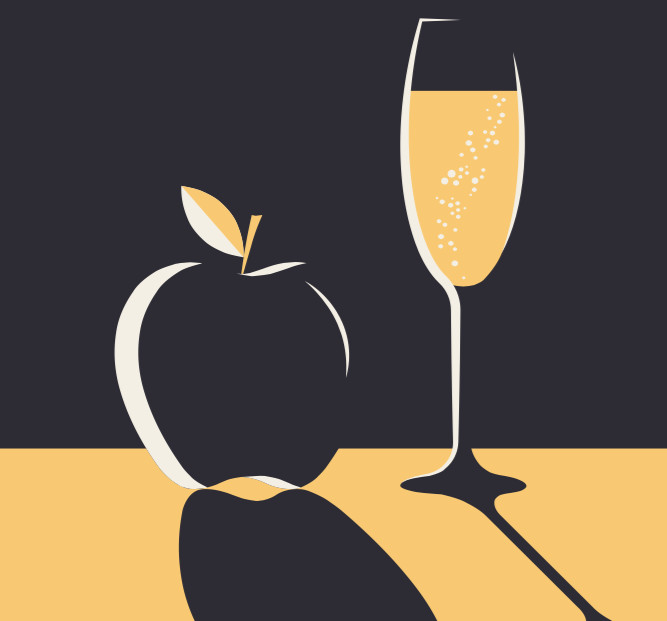 The best ciders are a match for any top wine, says Pete Brown, and it’s about time they were given the credit they deserve.

I knew Tom Oliver’s cider set-up was good. As is so often the case, I didn’t realise how good until I visited the farm where he makes it. When you’re making cider from apples, and just from apples – which is in itself rarer and more special than you might think – there are various ways of skinning the cat.

As previously discussed in this column, apple varieties in cider have just as much importance as grape varieties in wine. Some producers mix the whole lot up before pressing the juice and fermenting it. Others, such as Oliver, press each variety separately. Oliver ferments his ciders in a seemingly ramshackle collection of wooden barrels that more marketing-minded producers would create myths around.

In the spring following autumn pressing, Oliver then tastes the individual ciders that each barrel produces, and asks himself what they’re trying to be: one might be juicy and flabby, another sharp and bright. The right blend of the two – perhaps with a twist of a rambunctious third that’s had some wild yeast lurking in the grain of its barrel – will give him the rounded, whole cider he’s looking for. This perfect blend will then go into bottles, where it might be aged and mellowed for at least another year before being released for sale.

In a local farm shop, a 75cl bottle of the resulting Oliver’s Vintage Cider will set you back six or seven quid. I asked Oliver if he were able to choose, would he rather millions of people were aware of the quality of cider he made and bought it at this price, or would he prefer it if it was priced at, say, £22 a bottle and he sold the same amount he sold now, making the same amount of money as the alternative scenario? He thought about it for a few seconds, then replied: “I’d rather sell fewer bottles at £22.” If it were possible to strip everything else away and somehow price drinks purely on their inherent quality, Oliver’s Vintage Cider is easily worth that. Its character is easily as good, if not better than, a bottle of wine that would cost the same amount.

Tom Oliver uses the term ‘fine cider’ on his bottle labels. It’s a nice marketing touch. But now, it promises to become more than that. When Felix Nash set up a cider retailing company with the aim of selling into restaurants such as L’Enclume and The Fat Duck, he called it the Fine Cider Company. Last year, Nash consolidated by publishing a book, Fine Cider: Understanding the World of Fine, Natural Cider. Since then, I’ve been using this term to differentiate the good stuff from... well, the ciders most people think of as cider.

Focus on the product

Fine cider is easier to define than craft beer. It makes the crucial distinction of focusing on the product itself rather than the size or ownership structure of the company that makes it. It harks back to the golden age of the 17th century, when John Evelyn campaigned for cider to be seen as Britain’s wine, easily the equal of the grapey French stuff.

We could talk about traditional methods, using fresh-pressed fruit instead of concentrate, or whole juice instead of the 35% juice typical of the biggest commercial brands. All are important aspects to consider and worth educating people on.

But I love the term because it also has a strong emotional pull. It just sounds like something I want to try. Partly, this is because it makes you think of the drink at hand as being closer to ‘fine wine’ than ‘craft beer’, and that’s an important piece of positioning thinking. But it’s more than that. It challenges not just cider’s associations with beer, but also the associations many of us have with the idea of cider.

Fine cider shares with wine a similar emphasis on fruit varieties and processes. It’s also likely to come in 75cl bottles. But while it is elegant, fine cider also has a more rustic, earthier, more natural aspect to it. Wine aficionados who love orange or natural wine are discovering it as a link to a product they previously dismissed as inferior.

Crucially, fine cider typically has around half the alcohol of wine. Cider naturally ferments to 7%abv, and many traditional producers have only themselves to blame that a plastic pint pot of that doesn’t appeal to many of us. Repackage it in 75cl with a couple of champagne flutes, and it’s suddenly more like a drink of moderation than a headbanging juice.

Fine cider may not cost as much as champagne, but its price and lower abv mean people can drink more of it. As discerning punters look to move on from Prosecco, the next big thing may have been under our noses all along: we just weren’t thinking about it in the right context.