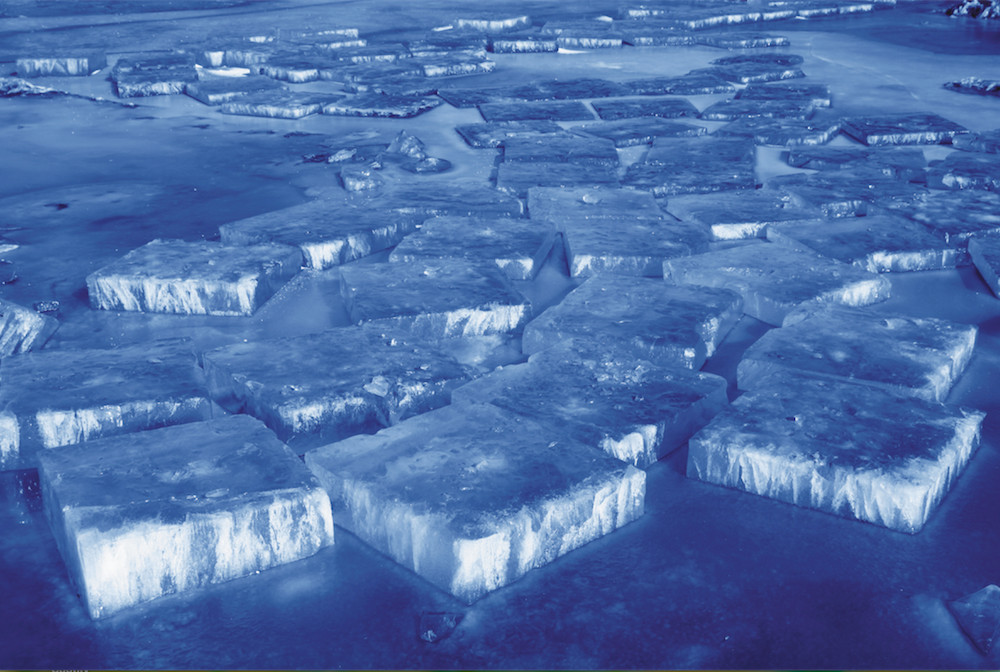 Professor Shane Eaton explains the exact science that leads to clear blocks of ice, he says.

In the early 19th century, Frederic ‘The Ice King’ Tudor revolutionised the way we drink cocktails by harvesting ice from Massachusetts lakes and shipping it around the world, including to the Caribbean. As it turned out, lakes naturally produce exquisite ice – much better quality than we have now from a standard freezer.

The secret is in the counterintuitive physics of ice formation. Whereas most materials become less dense as they are cooled, liquid water has an anomalous, but fortuitous, behaviour near the freezing point. At 4°C, liquid water is at its most dense, and expands instead of contracting as it’s cooled down to 0°C. This means that the water that’s about to freeze at a temperature of 0°C is located near the surface of a lake. In addition, water expands as it changes from liquid to solid, so that ice floats on top of a body of water.

But why is lake ice clear? Water actually needs to be cooled below 0°C to produce ice crystals. Such ice crystals have a very large ratio of surface area to volume, which favours heat transfer and encourages melting. That’s why large blocks of ice, which were used for the lucrative ice trade in the 1800s, melt more slowly than smaller cubes. As water is supercooled below 0°C, ice crystals will eventually form through nucleation, but since heat is given off as ice is formed, the surrounding water heats up again to 0°C. Thus, as ice crystals at the surface of a lake grow, they form slowly. Although water contains many impurities, when it freezes on to an already present ice crystal at the top of a lake, it expels these contaminants. This slow, top-down directional freezing is the reason for clear lake ice.

In a freezer, by contrast, water is rapidly frozen, producing many nucleation sites with smaller and rapidly forming crystals, which trap impurities between crystal boundaries, leading to cloudy and unattractive ice. In a traditional ice cube tray, ice forms from all directions, with the centre freezing last and, as a result, contains trapped gases and other impurities.

Replicating lake ice at home and in the bar At the Ice Room, the world- leading cocktail ice-making laboratory inside Carnaval bar in Peru, founder Aaron Diaz and his ice chefs “R” Raúl Arcayo and Jesús Espinoza, have invested in £5,000 Clinebell freezers, which act like lakes, but upside down. Clinebells freeze massive blocks of ice from the bottom, and the top of the water is constantly stirred to avoid freezing. Impurities are concentrated in the remaining liquid, which is discarded before it freezes. As popularised by drinks journalist Camper English, a simpler method can be applied to form clear ice at home or at the bar. For only £20, a 5-litre capacity Coleman or Igloo cooler can be used to achieve beautifully clear ice blocks. Mimicking a natural lake, an insulated cooler without the lid will favour directional freezing, promoting the growth of large crystals that push air and impurities towards the bottom of the container. Remember that water expands as it changes from liquid to ice form, so be careful not to overfill your cooler.

In Liquid Intelligence, Dave Arnold explains that hot water, which has fewer trapped gases than cold water, will enable clearer ice formation. Filtered mineral water with low impurities can help improve the clarity of ice, but even regular tap water can achieve great results thanks to the power of directional cooling. It will take about 24 hours to freeze the water in a 5-litre cooler, and only the bottom part of the ice block, which contains the impurities, will be cloudy. However, if the block is removed from the freezer before it is completely frozen, a clear slab of ice is produced. But not to worry if you freeze for too long – you can simply cut off the bottom cloudy portion of the ice block.

Once you’ve made your slab of clear ice, whether it’s a 150kg block from a Clinebell or the few kg slab from your mini picnic cooler, you’ll need to cut and shape it. At the Ice Room at Carnaval, they use a chainsaw followed by a professional bandsaw to progressively cut their massive Clinebell blocks into smaller and more manageable pieces, which can then shaped into 32 different forms, such as Old Fashioned cubes, diamonds, spheres and Collins spears. For a smaller slab made in an insulated cooler, a bread knife with a serrated edge should be first used to score the ice in the desired cut location. With the knife still in place, a slight tap from a mallet or hammer will allow for a clean cut through the several-inch thickness of the slab.

Before handling your lovely ice block, it’s crucial to let it warm up slightly. Cold ice is very brittle, whereas ice that has warmed up to near the freezing point is much easier to work with. A good visual sign of when ice is ready to be cut or shaped is when the frosty layer of crystals at the surface melts and the ice appears wet and clear. A 2in slab should temper and be ready for use in about 15 minutes.

For cocktail preparation, bartenders work with smaller cubes, compatible with standard shaking tins and mixing glasses. Although you can manually make these cubes, it is more convenient to use an automated ice machine such as the Hoshizaki (£8,000 for highest end model that produces 350kg per day), which is found in many top bars. Bartenders local to me – Guglielmo Miriello of Ceresio 7 and Patrick Pistolesi of Drink Kong – use a Hoshizaki to form cubes of 32mm (1.25in) per side, which they favour for standard shaken cocktails.

For Aaron Diaz at Carnaval, ice is more than just an ingredient, it’s the soul of a cocktail. In the Ice Room, Diaz and his ice chefs have been perfecting ice making for more than five years, and have even designed a five-cocktail tasting menu called the Ice Experience, inspired by none other than the Ice King, Frederic Tutor.