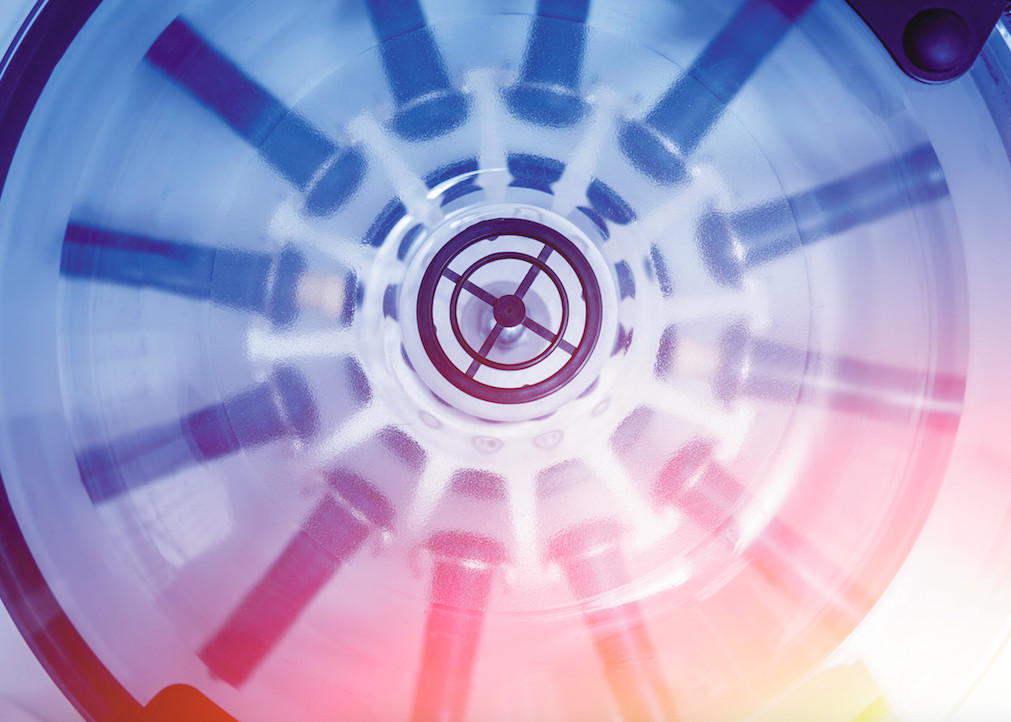 Up next in Professor Shane Eaton's white-coat lab tour is the centrifuge – an expensive piece of kit, but one that produces compelling results, he says.

Centrifuges remove fat from milk to produce skimmed milk, simulate high-acceleration environments for test pilots, and are even used for uranium enrichment. The humble washing machine? Just another centrifuge that uses a spinning motion to wring water out of fabrics.

Centrifugation separates particles from a solution according to their size, shape, density, viscosity of the medium and rotor speed. The separation of particles through sedimentation could be done naturally with the earth’s gravity, but centrifugation significantly speeds up the process. Centrifugal acceleration causes denser substances and particles to move outward. At the same time, objects that are less dense are displaced and move to the centre. In a laboratory centrifuge that uses sample tubes, the radial acceleration causes denser particles to settle at the bottom of the tube forming a puck, while low-density substances such as oil rise to the top. Anything in between turns into a clarified liquid.

The modern bartender or chef can exploit this force to spin the pulp out of juices or solids out of nut milks, let alone as a means of clarifying syrups and melding fruits with spirits. The rate of centrifugation is given by the angular velocity in revolutions per minute (rpm), or centrifugal acceleration expressed as multiples of the gravitational constant, g. The conversion factor between rpm and g depends on the radius of the centrifuge rotor.

The biggest roadblock to adopting a centrifuge in a bar setting is the cost and size of a standard unit. The CF-FL5M centrifuge used by Andrew Yap’s team at Old Man in Singapore has a capacity of three litres, with an overall mass 200kg and dimensions of 0.7m x 0.6m x 0.9m, making it difficult to place in a typical bar environment. In addition to requiring its own laboratory space, the CF-FL5M at Old Man has a steep price tag of about $7,000. However, this centrifuge is capable of reaching ultra-high rotation speeds of up to 5,000rpm and centrifugal acceleration over 4,000g, leading to outstanding clarification of syrups and juices.

Old Man Singapore and its flagship Hong Kong location, at the top of Asia’s 50 Best Bars list, apply the centrifuge to make the preparations for cocktails such as Islands In The Stream, with centrifuge-clarified pink grapefruit, salted Bulldog gin and carbonation.

The main danger of using a standard industrial centrifuge such as the one at Old Man is that the buckets must be well balanced. Small differences in mass of the load can lead to a large force imbalance when the rotor is at high speed, which could result in damage to the centrifuge or personal injury.

From lab to bar

Enter Dave Arnold, author of Liquid Intelligence and world expert on centrifuges and other high-tech laboratory equipment applied to mixology. Arnold recently developed a more compact and safer centrifuge called the Spinzall. At only 10kg, it is capable of reaching 4,100rpm and 2,000g of centrifugal force. A convenient rotary chamber means there is no need to carefully balance buckets or tubes as is the case with typical centrifuges. Although the chamber can only hold 500ml, a pump allows it to continuously feed liquid into the rotary canister for larger batches. Another obvious advantage of the Spinzall is the cost, coming in at a tenth the price of the CF-FL5M.

Centrifuge proponent Mario Farulla of Baccano Rome emphasises that the pre-treatment of liquids is crucial to achieve the best clarification with centrifuges. The commonly used agents include pectinex, chitosan and kieselsol. Pectinex ultra SP-L is a speciality enzyme that breaks down pectin structure, which greatly assists in the clarification of juices with a centrifuge. Chitosan is a positively charged fining made from the exoskeleton of crustaceans, while kieselsol is composed of negatively charged silica colloids. Both are typically used in winemaking, to collect all of the suspended particles in wine to produce a much clearer product. These treatments also work wonders for clarifying liquids produced in the centrifuge.

Clarified juice without pulp and cloudiness is easier to carbonate when making sparkling fruit and vegetable juices. For his new menu at Baccano, Farulla carbonated clarified rhubarb with a soda syphon in Ring To Bell, a drink based on fruit-washed rum and this veggie soda.

Bar managers on a limited budget might well be wary of introducing a capital-intensive method such as the centrifuge into their bar programme. However, the benefits of the centrifuge in mixology are compelling – transparent fruit and veggie juices, which can be easily carbonated, enabling eye-catching and vibrant-tasting cocktails.