A guide to the rotary evaporator
by Shane Eaton / 11 November, 2021 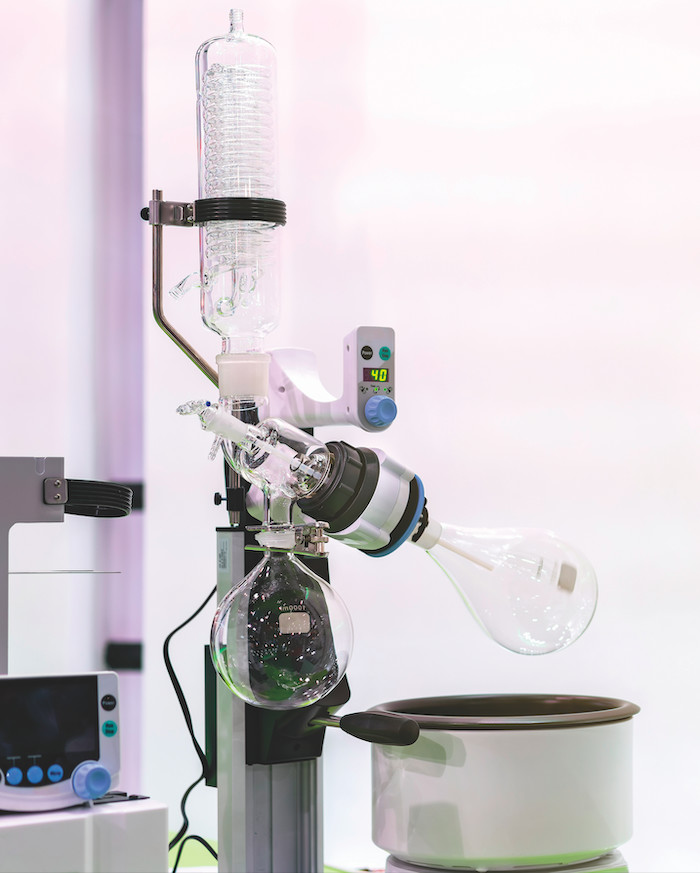 In the first of a new series, physics professor and cocktail writer Shane Eaton explains the science behind modern mixology methods. Where better to start than the rotary evaporator?

While by day I work with lasers, by evening my research takes a different form. After pondering complicated science problems, I like to unwind with a Manhattan or Martini at a local drinking saloon. It is here I disconnect, yet increasingly I find there are parallels between the technologies I apply in my laboratory life and the workings of the world of mixology. Thermodynamics, sound waves and centrifugal acceleration – fundamental topics in science – are now part of the modern bartender’s bag of tricks. Few have made a greater impact on the way modern cocktails are made than the rotovap.

In terms of drinks, distillation involves boiling a liquid mixture of alcohol, water and flavour to produce a vapour, followed by condensing back to liquid form. We all know that water boils at 100ºC, which is the case for distillation with industrial stills, which work at atmospheric pressure (101.325 kPa). However, for lower atmospheric pressures, the boiling point is reduced. For example, at the top of Mount Everest where the pressure is lower (33.7 kPa), the boiling point of water is only 71ºC. Rotary evaporators exploit this pressure-boiling point dependency and operate at a lower pressure, meaning you can boil liquids at a reduced temperature and without oxygen. This is crucial for mixology, and allows for a gentler distillation and avoids oxidation.

The rotary evaporator was first commercialised in 1957 by Büchi for use in chemical laboratories for the efficient and gentle removal of solvents from samples by evaporation. However, about 15 years ago Cairbry Hill of Stolichnaya started experimenting with rotary evaporators for altering the flavour of vodka. Hill shared this with London bartenders Nick Strangeway and Tony Conigliaro, the former first applying the method to mixology at Harvey Nichols in 2004. Rotovaps are now commonplace in top cocktail bars and have become a crucial instrument in the modern mixologist’s toolkit to craft homemade distillations, concentrate flavours, and infuse delicate ingredients at low temperatures. Leading authorities include Tony Conigliaro, Tristan Stephenson, Dave Arnold, Matt Whiley, Remy Savage, Vijay Mudaliar, Alex Kratena, and Luke Whearty.

The operation of the rotovap is relatively simple if you have been trained by an expert, such as Matt Whiley of Scout. The typical procedure includes pouring a mixture of a spirit and another flavour into the evaporation flask. To avoid cooking the ingredient, which would spoil its taste, you need to distil at low temperatures aided by a vacuum pump. The evaporation flask is rotated in a water bath, which warms the liquid mixture and allows it to boil at lower temperatures (around 40ºC) due to the reduced pressure. The steam then passes through a chilled coil, converting back to the liquid state, which is collected in another flask.

Whiley enjoys using the rotovap to redistil spirits. For example, in his Super Soaker cocktail, he redistils bourbon with watermelon juice, which he exploits to produce a unique twist on the Manhattan cocktail. Whiley also distils rum with typical tiki ingredients such as pineapple or coconut, but primarily uses the rotovap to flavour vodka.

Benjamin F Cavagna applies the rotovap at 1930 Milano to extract eccentric flavours such as soil, gorgonzola blue cheese or chicken to incorporate in cocktails and present something fun and provocative to his guests. He also manipulates fresh raw materials that can be useful in creating liqueurs, syrups or perfumes. An innovative application of the rotovap at 1930 is to dealcoholise spirits. For example, the bar produces a unique cold brew with a single-origin Ethiopian coffee with water derived from the alcoholic and non-alcoholic separation of rye whiskey.

Thankfully, rotary evaporators are relatively safe. However, one should avoid using home-fermented liquids that contain methanol. While the low levels of methanol produced by fermentation in commercially produced wine or beer are safe, distillation will lead to a higher concentration which could be poisonous. If the liquid to be distilled by the rotovap is safe, then the resulting distillate will be safe. Other possible dangers of the rotary evaporator include implosions resulting from use of glassware that contains flaws. One should avoid loose clothing, hair, or necklaces near the rotating flask, as they could become entangled leading to breakage of the glassware.

The rotary evaporator is a powerful high-tech method which, if used with good sense, can produce evocative fragrances and flavours in modern cocktails, and deliver new and memorable sensorial experiences to the customer.