A guide to the ultrasonic homogeniser
by Shane Eaton / 15 December, 2019 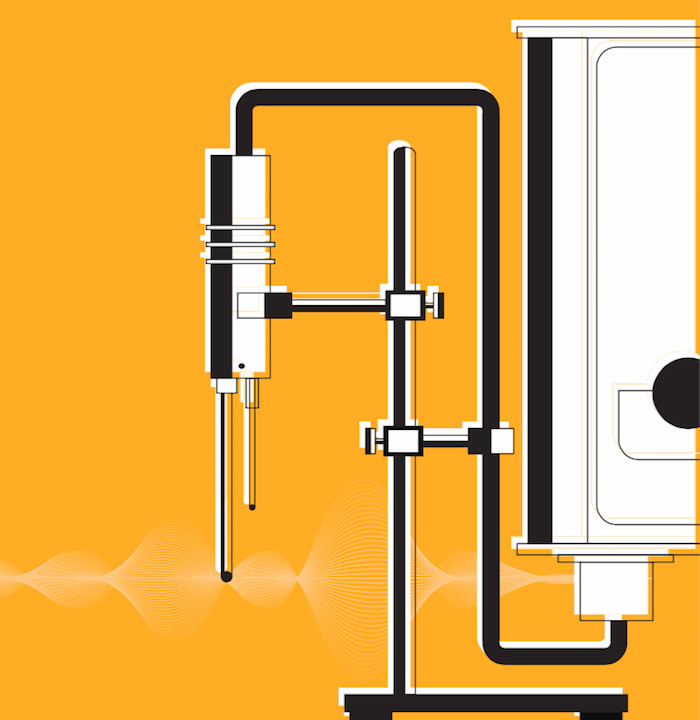 If you're looking for super-fast infusions, the sonicator or ultrasonic homogeniser might be the answer. Professor Shane Eaton explains how.

Ultrasound technology is a fast, non-destructive technology that has become popular in the food and drinks industry for extraction, degassing, homogenisation and sterilisation. In my physics laboratory in Milan, we apply the versatile ultrasonic technology to efficiently clean the surface of our laser-modified diamond samples for developing a quantum computer. Just like other high-tech methods such as the rotovap, centrifuge and sous vide covered in previous articles, science-savvy bartenders have found clever ways to apply ultrasonic waves to extract, infuse, or even rapidly create barrel-aged flavour. Ultrasonic processing takes just a few minutes, generating little excess heat, preserving vivid colours, aromas and nutrients while producing smoother overall flavours.

The application of ultrasound to liquids causes the rapid and cyclical generation, growth and collapse of microbubbles, driving thermal, mechanical, and chemical effects. But just how can you deliver ultrasonic energy to a liquid sample? The most common method is by rapidly vibrating a titanium probe using a piezoelectric crystal, which converts electrical energy into mechanical motion, usually at a frequency of 20,000 cycles a second.

Commercial ultrasonic prep machines consist of a generator, transducer, probe and a sound box. The acoustic sound box helps reduce the noise of the rapidly oscillating probe. The power of the generator and the size of the probe determine the amplitude of the vibration of the probe. Although there are larger, more powerful models, Dario Comini of Nottingham Forest suggests an ultrasonic prep machine with 200W of power for cocktail bars. At his bar he uses the Hielscher UP200St-G, which costs about €4,000 (£3,415). Comini warns against purchasing cheap models online, which often turn out to be fakes.

Here’s a simple test to ensure the authenticity of an ultrasonic prep machine: dip a piece of aluminium foil in water and operate the tip for a minute. Only a real machine will manage to pierce the foil’s surface.

Dominic Walsh, formerly of Mootee, Johannesburg, applies ultrasonic tech to rapidly extract flavour from solids, hard-to-penetrate items that would otherwise need a long time to macerate to induce flavour. Walsh produces a hay distillate where burnt hay is sonic prepped with genever to extract the maximum amount of flavour, which is then distilled with carrot juice. The result is then rapid aged again using the sonic prep and a seasoned wooden stave. The result is an earthy, complex and musty spirit, which is then mixed with Drambuie, black rock salt, earth bitter and Green Chartreuse.

At Mo Bar, Singapore, led by Michele Mariotti, the 7,000 Leagues Ahead is a reinterpretation of a gimlet that uses local kaffir limes, which are very oily and fragrant, but tend to dry out relatively quickly. To counter this problem, staff member Joshua, who lives just across the border in Malaysia, occasionally brings a couple of limes back with him. The oils are first cold pressed out of the skins, which are then blasted with soundwaves into the gin. The sonic prep machine homogenises the oils and the gin, producing a stable solution and a very rich texture. The drink is completed with a cordial made from the kaffir lime leaves, which are also extremely fragrant.

At Buddha bar Dubai, Francesco Galdi and his team apply ultrasounds in the What’s My Age Again? cocktail, a unique Penicillin in which they switch the base spirit from whisky to gin. First, they distil a gin with sakura blossoms using a rotovap, which is then infused with wood chip using ultrasonic waves for two minutes at 20kHz. The result is a floral and oaky gin that seems like it was barrel aged for two years, sure to please aficionados of mizunara barrels. The final ‘fake aged’ gin is combined with truffle honey water, lemon and yuzu.

A small amount of smoke powder is also added, which gives a very pleasant sensation of smoke from the original Pencillin.

A leading proponent of ultrasonic tech, Comini believes that, although presently very costly, ultrasonic technology will, in the near future, become a go-to technique for the creative bartender. The benefits include very short times for extractions and infusions in liquids, and the work can be carried out on the bar counter, generating a strong perception of a fresh product for the customers.

“At the moment the appliance is still very expensive, but I am sure that, in the years to come, its commercialisation will lead to a significant price reduction. Think of the microwave oven. In the 1950s it was huge and expensive but it’s now compact and costs £20.”