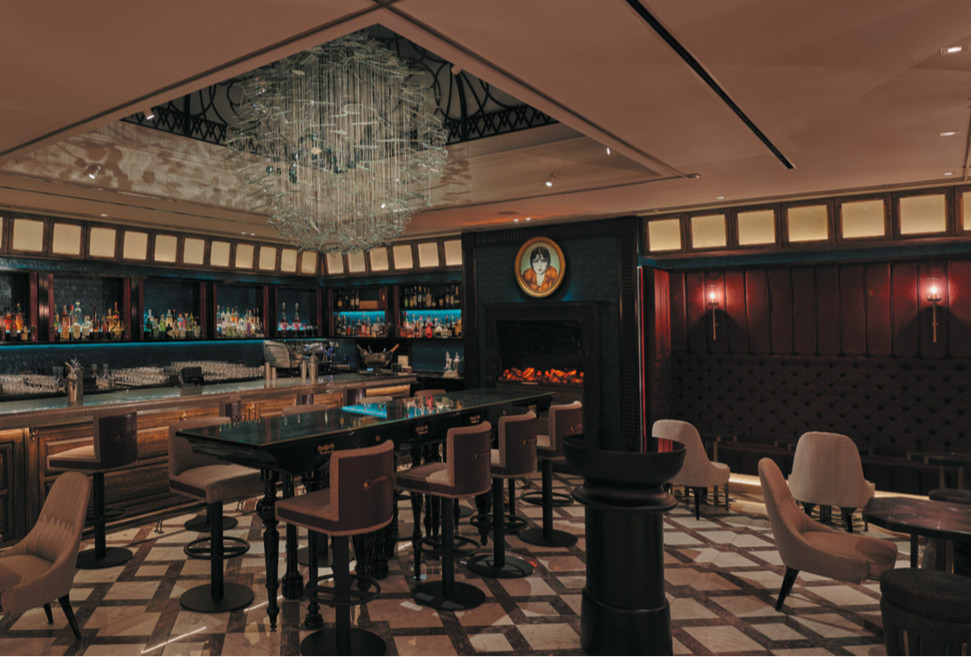 Bars don’t sell just drinks these days, they sell stories. They’re getting better at it too – the more engaging bar-realm raconteurs create worlds of persuasion that go far beyond the rudiments of venue-customer transaction. Of course, when the storytelling isn’t authentic to the venue, it falls flat, like the patter of a bad conman. For a good narrative, every detail has to make sense.

The former building of Scotland Yard certainly isn’t short on material. Possibly the most famous police headquarters in the world, it conjures images of heavy fog, gas-lit streets, daring detectives, bobbies on the beat and Jack the Ripper. The stories the walls of new The Great Scotland Yard Hotel bore witness to are so vivid they inspired Charles Dickens and Arthur Conan Doyle. This is catnip of a brief to any self-respecting creative.

Yet what they came up with wasn’t a predictable pastiche designed to vacuum up Big Ben tourists from the Westminster locale, but instead pulls at a lesser-known thread of the criminal world. The flagship bar is 40 Elephants, named after a notorious gang of female thieves who came from Elephant & Castle and menaced the city over three centuries. There’s another bar too – Sibín, a secret, illicit drinking den-style whisky bar – but 40 Elephants is the hub. You can ask the foyer staff, dressed in slightly odd historical garb, but it’s right in front of you.

A perfectly square space with 24 covers, 40 Elephants is naturally lit by a skylight, beneath which a chandelier of shards of broken glass hangs – inspired by the smash-and-grab antics of the Elephants. Above suede banquettes are engraved glass portraits of the gang, which, coupled with gaslight-styled lights, provide evening illumination. 40 Elephants has the character of an older bar and, it would seem from our visit, the client base too.

Floor staff pitch the welcome just right, reminding you of how the best hotel bars make you feel like a million dollars, even after your Zara coat has been taken to the cloakroom. A dainty but rich welcome drink of alcoholised hedgerow berries arrives, easing the emptiness of the first 10 minutes. If our host hadn’t already given us an introduction to the theme, the criminal records of the gang that accompany the drinks on the menu is an able accomplice. The drinks are aptly named, bearing reference to gang members and their crimes. Just think how contrived this could have been in less discerning hands: Jack the Ripper, with gin, blood orange and mist of London... But no, liquid cues are gleaned from more appropriate sources: inspiration comes from Cooling Cups and Dainty Drinks by William Terrington, the first-known British book on cocktails and published around the time.

Bar manager Michal Maziarz, who I first encountered in Four Seasons at Ten Trinity Square, is the man in charge of the bars. A scholar of drinks history and owner of a world-class moustache, Maziarz is perfectly cast for this detective story – he’s Poirot and Shakespeare rolled into one. He’s also one of the most underrated drinks makers in London.

First to lay anchor is Smash & Grab (£14, pisco, Peruvian marigold, apple marigold, vetiver gris liqueur). Named after the Elephant Gang’s 1920s method of thievery, it tastes like a long sour, though with marigold providing the bitterness. Refreshing and aromatic, it is critically also the right concentration – long but not watery, full-bodied but quaffable. Next is Mary Carr (£14, pineapple Riesling vermouth, forest floor gin, Manzanilla sherry, dry white port) named after another of the gang members – an inverted Martini-style drink in which the supporting cast of fortifieds benevolently overthrow the gin. Boozy but not in way that calibrates your night in the direction of disaster. Then there’s Black Diamond (£17, blended scotch, Tokaji, apricot tobacco grappa) named after the one-time Queen of the Elephants, Alice Diamond. A big old brawler, clever, and capable of besting any man – as was Alice, apparently.

The hotel’s restaurant, The Yard, provides the foodservice for the bars, and it mostly stays in character. The Chicken Skin is a stack of doused, crispy fowl epidermis which would have been flawlessly delicious if wasn’t also racked with guilt. The slightly incongruous Fish Finger Sandwich (£9.50) was the size of a finger, albeit a fat one and, while tasty, not to the level the price suggests. The Bedmi Puri was a snip at £4.50, but then was mostly made of air. The lentil pillows were not unpleasant but make a better North Indian breakfast than accompaniment to this set. This, allied to staff uniforms that try a little too hard, are the few loose threads of a story well told.