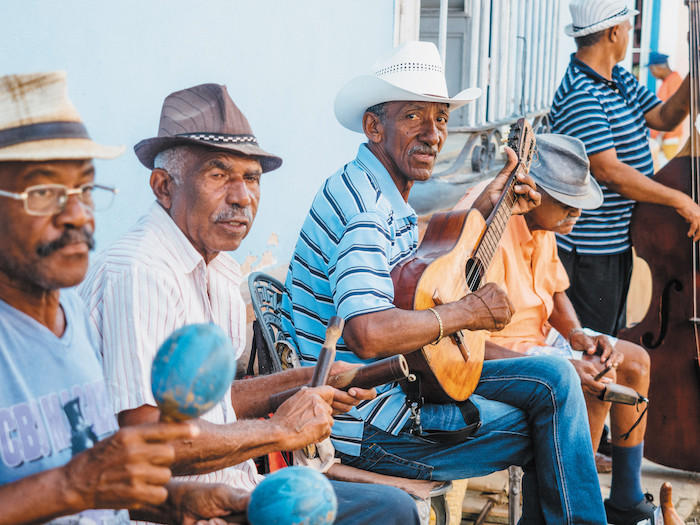 Dave Broom discusses the relationship between music and drinking, taking inspiration form the cultures of Cuba and Japan.

Though it might seem strange to say that there are direct links between music and drink, the connections are deep, and sometimes surprising. After all, like music, spirits are part of life, not separate from it. I first became aware of how complex the connection can be in Cuba when I was looking at the history of its rum and realising that, just as the spirit morphed from the rough aguardiente consumed and doled out to slaves into the refined light Cuban ron of the mid-19th century, so Cuban music evolved in a similar fashion.

The two stories were interwoven from the word go. The mass importation of slaves to Cuba in the 19th century saw African religions being brought as well. These – palo, akabua and, eventually, santeria - had their own sacred rhythms, but also began to incorporate rum into their worship.

The ceremonies, held in secret in the barracones on sugar plantations, or in the docks at Matanzas and Havana, used improvised instruments – spoons, boxes, tree trunks and old rum barrels – while the long pegs used in shipbuilding became the percussive sticks called claves. All of this evolved into rumba, the base of all Cuban music, and all of it involved rum. The two elements remain inextricably liked.

It was a similar story in Scotland and Ireland where whisk(e)y provided the liquid inspiration for folk songs and tunes and was the fuel for ceilidhs. Whisk(e)y became the liquid link between music, enjoyment, and community bonding – a culture cohering around drink and music. Even today, the idea of a ceilidh without whisky is hard to comprehend.

Music and spirits can also reflect societal shifts. In 1966, a Japanese guitarist called Eddie Ban returned home from a trip to Hawaii. In his luggage was a fuzz box – the first to arrive in Japan. When Eddie plugged it in, his band, The Golden Cups, changed from being pop crooners into mad garage punks. Others followed, and Japan’s music scene changed almost overnight.

In the same year, John Coltrane played in Tokyo and ushered in an explorative, experimental angle to the then mainstream Japanese jazz scene. Two very different musics, but each reflecting how the country was changing, absorbing outside influences, and then making the new fusion Japanese. At the same time, Japanese whisky was gaining in confidence, becoming the go-to drink and establishing its own personality. It is at this point that you can say the country’s whiskies became truly Japanese – in the same way as its music was transformed.

Music has another quality – an ability to reflect and create mood, and even alter taste. Years ago, I did a multi-sensory, head-fuck class. One of our experiments involved interspersing the talk by giving the audience glasses of cognac. Without telling them, we played different music with each serve: gentle ambient, rock, and ear-bleeding techno.

At the end of the tasting when we asked everyone for their reactions everyone said that the cognac drunk with techno was different to the one that they had drunk when the soundtrack was ambient. In fact it was the same cognac all the way through. The only thing that had changed was the background music.

It was an important lesson on how the soundtrack in a bar will affect people’s mood, begging the question: do you play the music you want to listen to, or the music which creates the ambience you want? Think of those classic Japanese whisky bars, darkened, and hushed with quiet jazz adding to the air of contemplation. Change that music and the mood changes.

More significant, though, was the way in which everyone’s taste perception changed. The experiment showed that when we ‘taste’ all of our six senses – sight, sound, scent, taste, touch, and mind – engage. All external stimuli will influence what we taste and change our impression of flavour. Play Coltranesque improv in that Tokyo bar and the whisky will taste different.

Let’s go back to Cuba and think of the great drinks of the Prohibition era. None of them are heavy and rich, but dynamic and energetic, sharp, enlivening, and light. Now think of the atmosphere in which those drinks were created and consumed. Hot climate, crowds of people wanting to party – and have that party prolonged in bars, each of which would have had its own band playing upbeat songs. The drinks reflected that.

Then stir in the possibility that the bartenders would be subconsciously shaking to the rhythm, acting as a second line of percussion. Would the movement of liquid over the ice affect the flavour of the drink? Yes, in the same way as the music helped to set the mood and changed people’s flavour perception. Music and spirit once again in perfect synthesis.