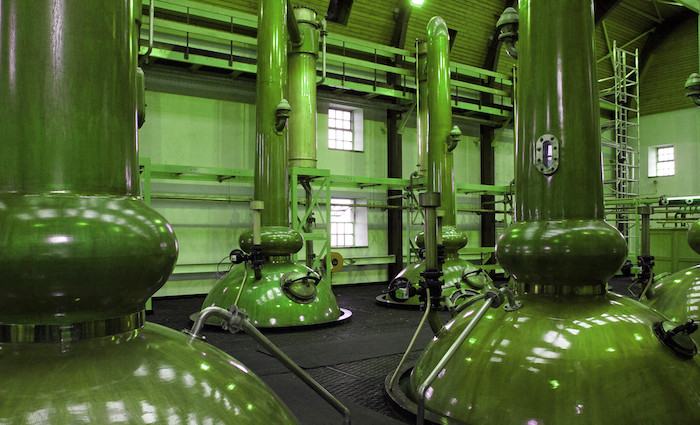 Dave Broom reports on the progress being made by forward-thinking whisky producers aiming to reduce their environmental impact.

The news that Nc’nean distillery had been officially certified as net zero for emissions for production was a first for the UK whisky industry, a considerable achievement given that the distillery only opened in 2017. “Net zero was always part of the distillery’s design,” says chief executive Annabel Thomas. “For example, using a biomass boiler to power the distillery, heat the offices, and create a closed-loop system for our cooling water. What we’ve done recently is to quantify that achievement through carbon footprinting.”

Nc’nean was also 20 years ahead of the Scotch Whisky Association’s target of net zero by 2040, a strategy that has been reworked twice since it was created in 2009, as outlined by Graeme Littlejohn, the industry body’s director of strategy & communications. “We’ve seen greenhouse gas emissions reduced by 33%, an increase in primary energy use from non-fossil fuel sources to 28%, and a 75% decrease in waste to landfill since 2016.”

While Bruichladdich isn’t a member of the SWA, it has its own ambitious targets. “Our top priority is to decarbonise distillation by 2025,” says chief executive Douglas Taylor, “which means finding an alternative to the traditional fuels heating our stills. We’ll also reduce our impact and waste, and continue research into sustainable agriculture.”

It’s an approach which mirrors that of Arbikie, owned by the Stirling family, whose ambition, co-founder John Stirling says, is to “create a single estate distillery, with everything grown on the farm, and create a circular environment with no waste”.

Positive though the Nc’nean certification is, it is clear from these conversations that there are still complex issues for the industry to surmount.

Thomas feels that one of the biggest learnings from the process has been “the significant lack of engagement and data in the business-to-business arena, making accurate footprinting challenging, and setting significant challenges for the reduction of Scope 3* emissions”.

She adds: “There continue to be some significant hurdles to achieving sustainability, and until more people get on board with that agenda to help with innovation, the choices that businesses have remain limited.”

A further issue arises when the distillery isn’t on the mainland. “The journey feels more challenging from Islay,” says Taylor, “because we don’t always have access to the same capabilities, whether that’s knowledge or infrastructure. We’re not limited in our thinking, but are in our implementation.”

While Littlejohn accepts that “the technology that will help the sector meet its environmental goals is still in its infancy or in the research stages”, he highlights that the UK government’s Green Distilleries Competition, which tests new technologies to help decarbonise operations, gave £10 million in funding to UK distilleries last year, 11 of which were in Scotland.

“It’s good that the SWA is talking about net zero,” says Thomas, “but we have to consider whether 2040 is going to be too late. Should they have been making this commitment 15 years ago? Yes, probably. However, with so little in terms of strong political direction or policy incentive, it’s hardly surprising that there has been inaction.”

Although Stirling agrees that “a huge amount of positive work” is underway, he adds: “Until it addresses the core issues and major causes instead of easy marketing, it can, and will, be accused of greenwashing.

“Making your distillery much more sustainable is relatively easy to do,” he claims. “Organisations with the available money could do this tomorrow. While this should happen, it misses out completely the areas where huge and the most important gains can be made – raw material and packaging.”

Taylor picks this up. “Global ambitions will have to come down to a granular, local level,” he says. “You have to start channeling that investment at a local level to release the potential of the green energy solutions. Without the ability to capture the energy, transfer it to the distillery, or to feed it back to the grid, the renewable solution alone is futile. The network provider will not invest in the infrastructure until such a time where the demand is firmly there.” We’re in a chicken and egg world.

The concentration on process, Stirling and Taylor feel, overlooks the need for a substantial revision of modern farming practice which, the former states baldly, “is one of the major causes of global warming”.

Stirling explains: “Farmers, in order to survive commercially as a result of decreasing prices in real terms, have had to make maximisation of yield and reduction in growing cost their primary focus.” This has meant a concentration on a few genetically-identical varieties which need the use of glyphosate as a ripening agent.

“If distilleries are serious about sustainability, they should publish the carbon footprint of grain deliveries [which Nc’nean has done], where malting barley and other grains are sourced, and work with maltsters to increase capacity in Scotland.” Regenerative farming, and the use of heritage barley varieties, “less yield, but better for the environment with no need for glyphosate”, was key to making a difference, he feels.

This chimes with Bruichladdich’s approach. For Taylor, the consequence of opting out of the traditional barley buying system has revealed the potential “for regenerative agriculture to be part of the solution”.

“Supporting those agricultural systems and encouraging others to join the journey towards minimal inputs, and guaranteeing fair prices for these crops should be part of every distiller’s 10 year plan,” he adds.

So, what should the industry look like in a decade? “I hope it will have smashed the SWA’s targets and have a majority of distilleries at net zero,” says Thomas. “We need to have established clear standards for reporting on carbon emissions (across all Scopes) and water use, to make the process easier to follow and provide a level playing field from which it becomes easier to benchmark performance.”

Net zero wasn’t sufficient for Stirling. “We have no aim to be net zero because we have the ability to go that step further and become climate positive. It’s not easy for certain companies and countries to achieve net zero, so those that can need to take that extra step and achieve a positive impact.”

Progress, it would seem, is being made, but we are still at the start of a complex process – and time is not on anyone’s side.