Dave Broom on the "changing discussion" around scotch blends
by Dave Broom / 12 January, 2022 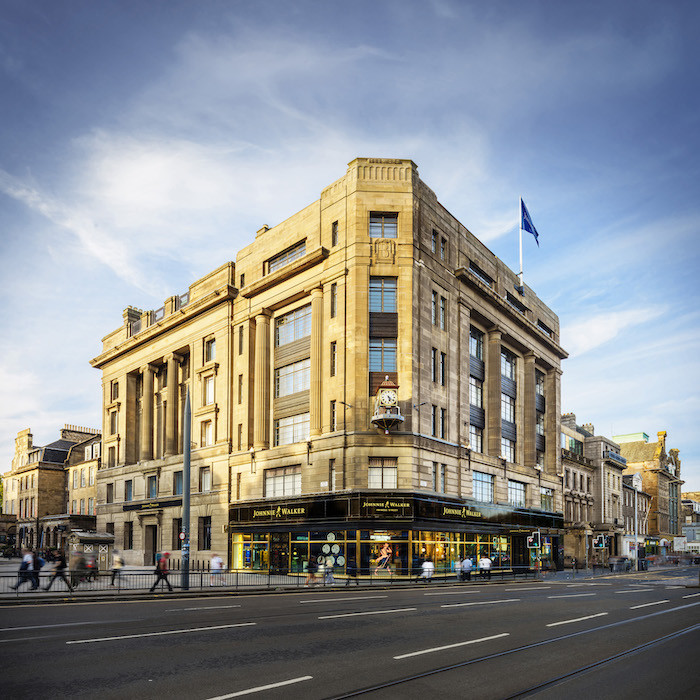 Scotland’s smallest bonded warehouse can be found in the depths of Diageo’s new Johnnie Walker Experience in Edinburgh’s Princes Street. As well as dramming casks from a wide range of Diageo’s makes, there’s a series of large glass vats, each containing a different blend made by one of the 12-strong blending team.

In keeping with the building’s ethos of flavour and people, after having all the blends’ flavours described, visitors can pick one to try – as they taste, the voice of the appropriate blender will go into more detail.

At the opening of this far-reaching whisky education centre, the voices were corporeal, as Emma Walker (soon to take over as master blender) and Aimée and Stuart Morrison took us through the thinking behind what, in Emma’s words, is a “showcase of the matrix of flavours”.

She adds: “You can start with the same building blocks, but even a small change will give you a very different character – to be able to do that is hugely exciting, and it surprises us still.”

“It was two solid years of work on this project,” says Stuart, who was tasked with selecting the final casks for the team to make their blends. “It was a blank sheet of paper: the dramming casks, the bottle your own, to the whiskies in the bar upstairs, and the Blenders’ Batch. Getting to secure some of those utter delights for blending was a privilege and a half.”

The tour is an exploration of a world of flavour, punctuated by different serves – the neat drams in the warehouse, a Highball at exactly the right time, cocktails calibrated to suit your flavour preference, before drinks in the rooftop bar. Different serves, temperatures, and tastes.

Blending is at the core, but delivered in such a way that it never feels as if you’re being battered over the head by the Striding Man’s walking cane. Instead, you are in the blenders’ world, allowing them, finally, to explain what they do, and how flavours work together.

Any conversation about scotch blends has been one-way traffic in the UK for decades, with distillers saying “try blends”, and the public (and, ahem, some bartenders) saying “no thanks”. The paradigm of “malts good, blends bad” has been a hard one to break.

I caught up with Emma and Johnnie Walker master blender Jim Beveridge (who will retire at the end of the year) soon after to tease this out further. “A big part of working with Walker has to be continuing the tradition of flavour and taste that we inherit,” says Jim. “We are custodians, and our job is to navigate through the changes that take place in the wider world and still produce that blend.”

This idea of having a responsibility to maintain a quality standard, and a flavour, has somehow been warped into the belief that blends are unchanging and therefore obsolete in a rapidly changing world.

How irritating is it that people believe innovation isn’t possible? “Do you innovate because you’re not happy with what you’ve got, or do you innovate because you believe there is more to come from a creative point of view?” asks Beveridge, rhetorically. “You’re using that tradition, but moving it into different spaces, getting feedback from the consumers, brand ambassadors, and bartenders to see what chimes with them to get an idea of what could be happening in the future. The bartender is part of our team, and we are part of that community, because it doesn’t stop with the bottle, it continues to the bar.”

Out of this consumer-centred thinking has come Blue Label’s Ghost & Rare series (the latest, highlighting Pittyvaich is just out), the Blenders’ Batches, as well as White Walker and Johnnie Blonde.

Blends are driven by flavour, and as those preferences change and widen, so they have to engage with shifts in occasion, and serve. They always have done. Like all the blends of the time, Walker was recalibrated in the early 20th century when whisky and soda became the go-to serve. Nothing has changed.

But what if you expand on that notion and craft a blend to match a feeling? That’s the approach taken by Woven, a new blending house in Leith, whose first three ‘experiences’ were recently launched.

“The concept is simple,” says co-founder Duncan McRae. ‘We want to positively disrupt the way in which blended whisky is perceived, created, and experienced.” In his words, it’s using “blending as a metaphor to explore ideas around creativity, collaboration and community”. What lies at Woven’s core is seeing blending not as an amalgamation of distilleries, or even ‘just’ flavours, but having a more abstract relationship between liquid and drinker. If whisky appears to change according to mood, occasion, company etc, then why not blend to answer that?

Woven’s approach suggests that drinking whisky isn’t separate from an experience, but can be central to it. It also ties into the idea that a blend can do things that a single malt can’t.

The latter, while triggering an emotional response, is built on the principle of reframing and amplifying a single distillery’s character. A blend, on the other hand, can use a multiplicity of styles, sources and ages to widen that engagement. It is, frankly, better at doing it than a single malt. This idea has what may seem an unlikely ally in Jim Beveridge. “The definition ‘blended scotch’ annoys me intensely,” he says. ‘Within that context, blending is a pejorative term, seen as mixing magic stuff with cheap stuff.

“It should just be ‘scotch whisky’, maybe with a back label saying ‘a blend of malt and grain’. We should consider the mixing of things together to make something that is greater than the sum of its parts as magic. It is a huge place to be in, and huge fun.

“Without question, it  is the best way to express scotch whisky. The best you can do is bring the light ones, the sweet ones, and the heavy ones together. That is what blending is about. People should say: ‘This is a blend? Great! It’s going to have lots of different flavours. It’s a lot better than a single malt, it’s a blend.”

Maybe, finally, the discussion around blends is changing.