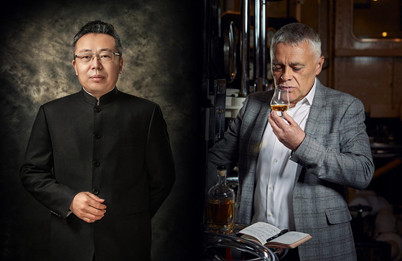 Kylin Spirits Group is to launch a new hybrid spirit made from scotch whisky and Chinese baijiu.

Duality of Spirits will be Kylin’s signature product, launching in May 2022, and is the result of a colaboration between master distiller Shen Caihong and whisky maker Max McFarlane, formerly of Edrington.

The hybrid will see spirit from Luzhou Laojiao, a Baijiu distillery dating back to 1573, and select Highland single malt whiskies from Scotland.

The spirits makers have experimented with hundreds of combinations, until “recipe 355 finally provided the results they were striving for”.

McFarlane said: “The spirits of golden wheat colour had a pleasantly balanced aroma with evident, but not strong fragrance of Chinese Baijiu, accompanied by a fruity scent. The sophisticated taste was balanced, with touches of liquorice, sweet cream and star anise, while the finish delivered a subtle salted butterscotch taste, followed by peanut butter and American cream soda.”

Caihong said: “Our mission has been to bring the Chinese national liquor – Baijiu – to the world, with a vision to become an iconic name in 21st century spirits technology and innovation. We have always recognised the importance of promoting a deeper cultural exchange alongside an inspiring duality of spirits and we are committed to developing meaningful cultural collaborations between nations and two craft industries blessed with esteemed heritage, provenance and a spirit of innovation.”

Kylin also has a new Chinese Baijiu product in development for launch on the global market as well as a new whisky with “a distinctive Chinese flavour”.