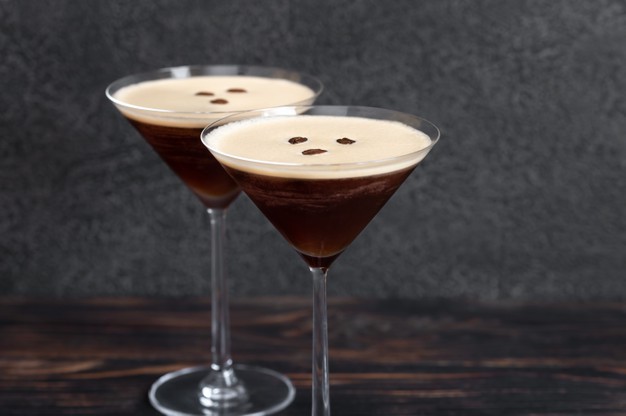 Jane Ryan traces the chequered history of the Espresso Martini.

When I think of the bar world the Espresso Martini was born into, I think of the dark basement that was the Atlantic and all the people who claim to have been kicked out of there for doing drugs on the tables. Or, worse still – at least for the hygiene rating – for having sex on the tables. I think of Woo Woos, leather trousers, and of Simon Difford with hair.

The only thing to have survived the ’80s from that list is the Espresso Martini. Which is one helluva triumph story if you really think about it.

Understanding the allure and enduring popularity of the Espresso Martini really boils down to one question – when do people order one? It’s rarely premeditated. This is the crisp- packet impulse buy of the drinks world. It falls into place right at that moment when a night suddenly has the promise of more. It’s the uber to the next bar, the link between a few and a lot, a transition that says: “I’m not ready to go home yet. I’m ready to dance on the table.”

Invented back in 1983 for a customer who famously wanted something that would “wake her up, and fuck her up”, the Espresso Martini is one of the few drinks that we know exactly when it was created, and where. “I suppose it was inevitable that these two bastions of psychosomatic alteration should one day combine forces to become allies in the fight for a good night out,” writes Tristan Stephenson in The Curious Barista’s Guide to Coffee.

Beyond good bartending and balance of flavour, there’s a scientific solution as to why Dick Bradsell’s drink tastes so wonderful. “Like water, alcohol relieves coffee of its flavourful compounds, and in many ways it does it better. Alcohol is better at extracting coffee oils, has the ability to form stable emulsions (known as nano-emulsions) with those oils, and is useful in the fight to preserve fragile soluble matter once appropriated...,” continues Stephenson. “The only problem with using alcohol to make coffee is the taste of the alcohol itself. The hot fumes and peppery burn that we associate with ethyl-alcohol do not improve the flavour of a coffee. By adding sugar to an alcohol extraction we dramatically lessen the effects of alcohol burn.”

Then, in 1998, Bradsell moved to the newly-opened Pharmacy in Notting Hill and renamed his drink a Pharmaceutical Stimulant, served on the rocks. It was a bold try, but the adoring public would never be able to call it anything other than an Espresso Martini.

Despite them now being practically omnipresent, it wasn’t as simple as a rise to fame and global domination. In fact, the Espresso Martini almost didn’t make it into the modern cocktail scene. If 1998 was the year Bradsell tried to rename it, 2000 was the year the first bar to not carry vodka opened in New York City – Milk & Honey. Many others followed suit and in 2008 Tales of the Cocktail officially buried the Appletini. It wasn’t just vodka that was on the decline as the new age of cocktails swept the major cities of the UK and US either. Coffee machines were now less a part of the back bar.

The Espresso Martini didn’t fall off the face of the earth though, ostracised for its vodka base and 80s origin. Instead it travelled south with many other British expats and found a home in Australia and New Zealand, lands that to this day have an inexplicable passion and love for it. In fact, in 2015 Melbourne’s prestigious Black Pearl said its Espresso Martini outsold all other cocktails at the bar by a ratio of four to one.

It was the industry’s go-to hangout spot Supper Club that really heroed and ensured the longevity of the Espresso Martini however, serving them until 5am to weary bartenders post-shift. While so many of the UK and US bartenders were trying to erase the memory of the Espresso Martini, it was the Kiwis and the Aussies who were turning a fast profit based on this very drink.

So what brought it home? “The Espresso Martini is popular where good coffee is having a resurgence – think cities like London, Berlin, Amsterdam, New York and Los Angeles, which are leading the charge,” says Tom Baker, owner of Mr Black – an Antipodean-founded coffee liqueur that’s of late given the more-established brands a run for their money.

For London, a pivotal point has to be the expansion of Shoreditch Grind, which operates as a cafe by day and throws on its dancing shoes come night. It’s a hispter’s hedonistic dream fuelled by caffeine and vodka and was one of the first venues to bring back Bradsell’s cocktail to the masses.

Good coffee is still not ubiquitous though. Not all bars have an espresso machine either, so some have turned to cold brew or cold brew concentrate. It makes sense, but objectively it just doesn’t bring the same rich texture and earthiness – in fact the coffee liqueur is often far too prominent when the bitterness of an espresso is not there to tame it. That said, in the years since its inception, bartenders globally have found plenty of room for creativity within the simple formula of vodka, espresso, liqueur and simple syrup. For starters there’s the expanding choice of coffee liqueur brands which are increasingly heroing quality coffee. Then there’s the addition of modifiers and temperature. Standouts from the recent renaissance include Ian McIntyre’s Frozen Vodka Espresso from Shoreditch’s Ace Hotel which blended coffee, demerara syrup and vodka with crushed ice to form a frappe version.

Even LCD Soundsystem has its own recipe of this classic, using its travelling espresso machine to help kickstart cocktail hour.

Team Lyan’s on-tap whiskey version, the Nitro Martini, is perhaps the most iconic of the modern incarnations. This rebel take on the drink is one of the few that puts cold brew to good use, in a large part thanks to the fact the cocktail is then carbonated so we miss none of the delicious frothy head. Using Jack Daniel’s, sour cherry juice, maple syrup, an acidic solution and cold brew, it had its own successful UK bar tour.

The recipe worth sharing today, however, is that from Giuseppe Gonzalez, whose now-closed New York bar had an entire section dedicated to influential vodka drinks, of which the Espresso Martini was without a doubt the finest – cutting out the additional sugar and leaving an easy-to-replicate but still flavourful and complex cocktail. Just as good as the original, modified for a drier palate and heroing that all-important fresh espresso. Because, if there’s one rule to an Espresso Martini, it’s this: step away from the instant coffee.