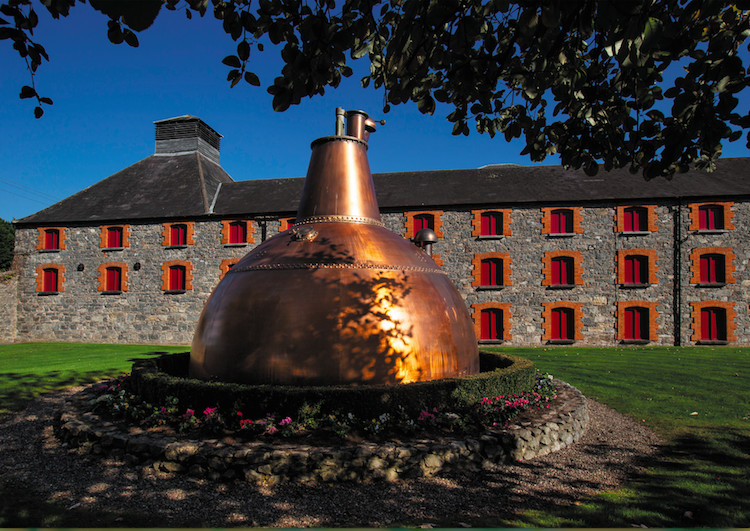 Regardless of whether you ask them or not, any self-respecting Irish bartender will tell you Irish whiskey was once the biggest style of whisky in the world and that, soon after, it very nearly died a death. From having hundreds of distilleries in the early 20th century to a couple left by the ’60s, its boom to near bust always makes for an interesting bar room chat. Today’s landscape for the category is far less bleak though, and its resurgence is most definitely in full swing.

While blended varieties such as Tullamore Dew and Jameson are killing it, what’s capturing the imagination of both well-established brands and new entrants to the market is Ireland’s original style of whiskey – single pot still.

It is defined as a whiskey distilled on the island of Ireland, made in the one distillery with a mix of malted and unmalted barley, but can also have small amounts of other cereals added. Not only does single pot still now have GI protection but its biggest brand, Redbreast, just picked up world’s best at the International Wine & Spirit Challenge, scoring 98 out of 100. That win must have been a great confidence booster to the 20 other distilleries in Ireland that are now laying down single pot still.

Beginning, as one always should, with the liquid, let us be reminded of how the Irish can use a wider variety of ingredients. With Scottish single malt, only malted barley can enter the mash bill and both countries have to age their whiskey/whisky for a minimum three years. Where things differ is that Scottish single malt must only use oak. In Ireland, though, other woods can be used. Bearing in mind that these differentiators give a wider scope for their liquid, how does that bode for Team Ireland? Brendan Buckley is international marketing director for Irish whiskeys at IDL Pernod Ricard, the company that single-handedly saved single pot still from extinction. Its brands include the aforementioned Redbreast and Green Spot.“The scope to use multi grains and different wood finishes makes single pot still so interesting. With our microdistillery we’ve already had a chance to experiment with oats and rye as well as barley. We’re not as hamstrung as such as we can play with a wider range of tunes.”

What makes it unique

A newer player in single pot still agrees with that sentiment. Alex Conyngham is co-founder and global ambassador of Slane Whiskey. Like many a spirit lover he’ll settle into a single malt quite happily, but the unmalted barley for him is what makes single pot still so unique and tasty – to such an extent that its new-make mash bill is 60% unmalted and 40% malt. “The unmalted barley gives the liquid such a lovely spiciness that, as it gets older, you get this deeper and deeper fruitcake note that almost becomes edible,” he says.

But for many, the somewhat tighter restrictions on Scottish single malts are seen as a positive element in that they have encouraged creativity and helped to forge their regional styles. Vaughan Yates is a consultant strategist with a background of working on more than 40 distillery projects, most of them in Scotland and many in Ireland. He points out there have been a lot of stills installed in Ireland that are all very similar and were put in because of capacity and litres per annum needed, while not properly examined for the style of whiskey they produce. “If you know your single malts,

you’ll know that Glenmorangie is a lighter style of spirit because the still used is very tall, whereas Macallan has a far more oily mouthfeel because the stills are shorter and fatter, which work particularly well with European oak.” Definitely an area the Irish could improve upon if they want to maximise what their more unique ingredients and characteristics can bring to the bottle.

Looking more into marketing, one of the many reasons premium American whiskeys have done so well is that they have a far more urban perception, especially when compared to Scottish single malt with its tweed jackets and rolling Highland hills. Scotland’s communication of its single malt has been exceptionally well executed but some of the contributors to this piece feel it has conjured up too much exclusivity around the cache of the category.

Looking at all the brands of Ireland, including single pot still ones, they have cultivated a more playful approach to their whiskeys – the global success of the Jameson, ginger ale & lime serve is a prime example. Taking inspiration from there, they’ve dug a path that’s less precious for single pot still. The Method & Madness brand personifies this well with its futuristic branding and chestnut wood finish. It’s not just a dram that’s super- exclusive for super-exclusive occasions. And, as both Ireland and Scotland strive to get away from age statements on their releases, it’s Scotland that will find that battle harder. It nailed its colours to that mast long ago and made it one of its primary unique selling points. With single pot still, that is nowhere near as prevalent, especially when you consider the new brands won’t go near revealing their age. Image and legacy both fare well in the short and long term for Irish single pot still and are moot points for Scottish single malt.

Pat Rigney, owner of The Shed Distillery in Leitrim, released his first single pot still before Christmas. He feels that, with international competition, single pot still has a better point of difference. “Let’s not forget that there are more and more countries now producing their own versions of single malt,” he says. “You could definitely view that as a challenge to Scottish brands and a chance for Irish single pot still to stand out.” In 20 years’ time, will spirit lovers still be flocking to Scottish single malt when dozens of other countries will be throwing down the same?

Taking on board their shared Celtic genealogy and the fact that they were the first countries to bring whisky to the world, perhaps now Ireland and Scotland should be future-proofing together. Both of their whisky/whiskey associations already assist each other a lot, so maybe they could take it up a notch by forging stronger alliances in their marketing and whisky/whiskey tourism. When every Tom, Dick & Harry around the planet is distilling their own whisky, people will need to be kept aware of who the old-school top dogs are.

At the very least, surely they could muster up a wee Celtic whisk(e)y festival together? Our mutual love of partying is probably what led us into distilling in the first place. I for one would be down for that.