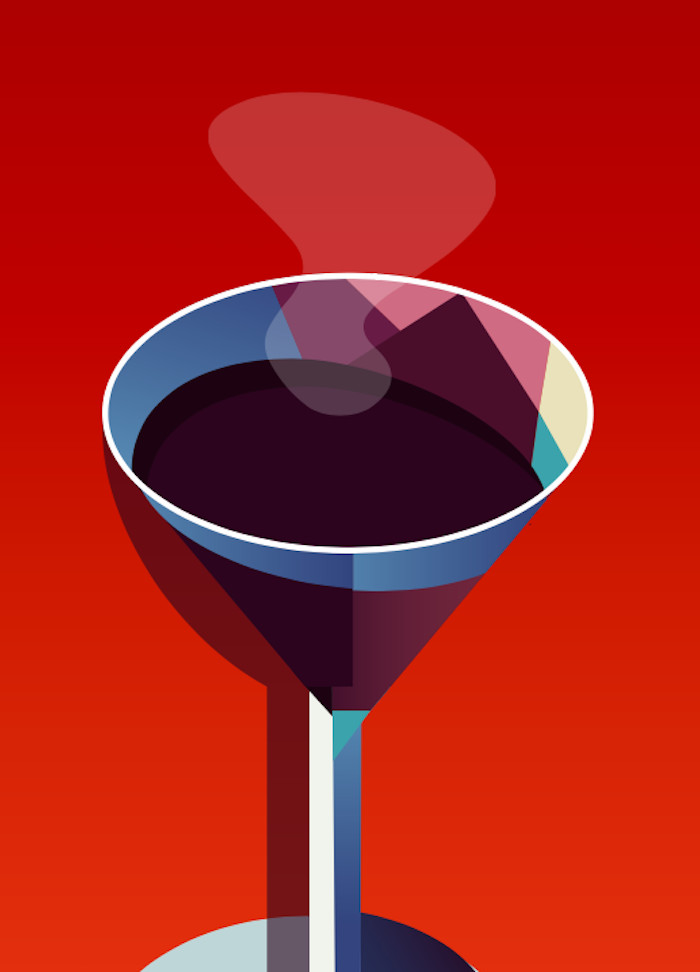 If 75-95% of what we think we taste, we actually smell, then there can be little arguing with the need to make sure the aroma (orthonasal smell) and retronasal aroma that contribute directly to the flavour experience are optimised. Increasingly, however, some of the most innovative cocktail makers out there are starting to add fragrance to their drinks directly.

My Italian colleague Antonia Bondi has developed a range of edible alcohol-based scents, for use by chefs and increasingly in the bar setting as well. She has managed to capture the essence of Sorrentino lemons, rosemary, freshly-baked bread, bergamot, osmanthus flower, and more.

Top chef Massimo Bottura uses a number of these edible essences in the dishes served at his world-leading three Michelin-starred Osteria Francescana in Modena, Italy. The delightful scents associated with these edible aromas are far removed from the provocative squirt of carnation scent that would once have been aimed at diners’ faces when the Italian Futurists were hosting dinners and mixing drinks back in the 1930s.

Go even further back in time, and one even finds Ancient Roman Pliny the Elder (2-79 AD) writing about fragrances being used to enhance drinks. However, one response to hearing about such edible fragrances being spritzed over a drink just prior to serving is of the sort: “If you want to give your drink a citrus aroma, why not simply add a twist of lemon?” One answer is that the citrus scent is very particularly of a Sorrentino lemon, not one of the many other kinds of citrus, only a few of which are normally available commercially.

Just how effectively ambient fragrance can alter the taste of a drink is illustrated by the whisky course on chef Jozef Youssef’s Gastrophysics Chef’s Table menu. Diners are given a glass of whisky to taste: for those who prefer a sweeter-tasting drink, Youssef sprays a caramel scent into the air over the diner, whereas for those preferring a smokier drink, he spritzes a smoky bacon scent instead. No sooner have the aromatic molecules started to fall through the air, the taste of the drink changes instantaneously.

As Kevin Peterson, of Detroit-based cocktail bar Castalia, puts it: “Scent has the ability to dramatically call up memories, elicit emotions, and change the tone of a drink. With that in mind, it has the potential to be a very powerful tool in a bartender’s toolkit.” The Call of Curiosity, Castilia’s take on a Gin & Tonic, is served with a paired fragrance, Siren Song. Emanuele Balestra, bar manager at Bar Galerie du Fouquet’s, Cannes, has also grown increasingly interested in the possibilities associated with serving more fragrant cocktails.

However, I believe that one of the most promising uses of ambient fragrances to accompany a drink currently is when they help to set the mood, trigger nostalgia, or help tell stories. Just take Tony Conigliaro’s The Rose cocktail from a few years ago. The drink provides a wonderful example of the use of a scene-setting scent to complement a serve. As the champagne is poured over the rose oil-soaked sugar cube sitting in the bottom of the glass, the fragrant floral effervescence helps to fill the air around the drinker with the delicate, yet highly-evocative, scent of an English rose garden in full bloom. Chefs, meanwhile, have been trying to capture the smell of everything from the sea (which turns out to be harder than you might think) or else the smell of an old-fashioned sweet shop, again to trigger nostalgia and positive emotion in their guests.

However, one of my all-time favourite examples of the use of scent to help tell stories around a drink has to be the limited-edition Beaufort gin that was released a couple of years ago. The inside of the cardboard box in which the drinks kit arrived was printed with a map of the Battle of Trafalgar, 21 October, 1805. The dark and foreboding bottle of gin came with a few bottles of pink grapefruit mixer, some scent strips, and a smell perfume atomiser. The idea was that people making a drink at home would spritz the scent strip with the perfume and attach it to the side of their iced glass (where the condensation would hopefully make it stick). Then, every time the punter brought the glass to their lips to take a sip of the powerful gin, their nostrils would be assaulted by the pungent smell of cordite. One could almost imagine being on one of the galleons displayed on the map. I find this use of ambient scent to help set the scene and help create an atmosphere much more intriguing than using it merely to capture something that you might find in the drink itself.

Of course, the desire to add fragrance to one’s drinks also brings up the question of whether the bartenders’ personal fragrance may start to interfere with the guest’s olfactory experience of their drink. Oenologists have been known to suggest that you should never wear perfume or aftershave if you are going to a professional wine-tasting for just that reason. Similarly, chef Thomas Keller banned all of the wait staff at his famous New York restaurant Per Se from using any fragranced products. If the trend toward more fragrant cocktails continues to grow (likely, given how Instagrammable they can be), one might well wonder how long it will be before the guests themselves are requested to take similar olfactory precautions.