Why hot cocktails don’t have to just be relegated to Christmas
by Millie Milliken / 05 January, 2023 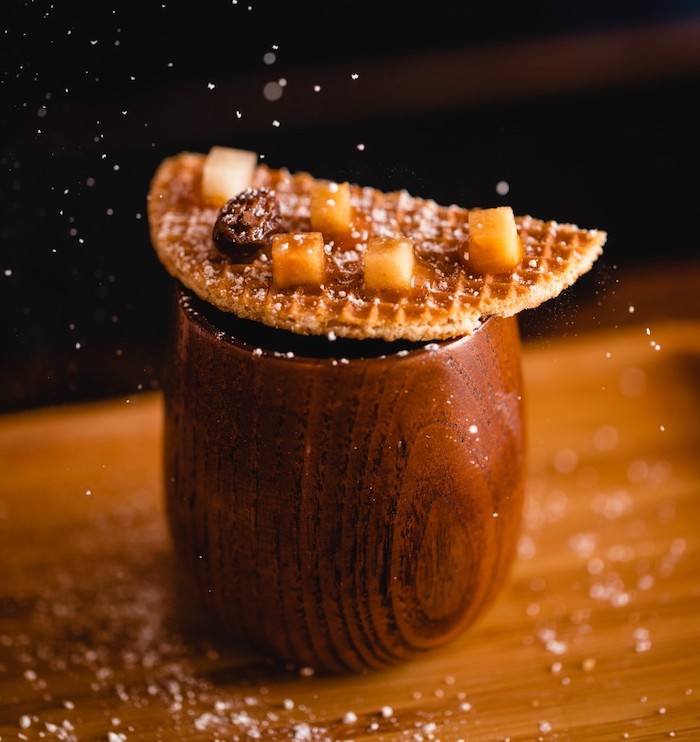 Hot cocktails don't have to play to the silly, saccharine and suffocatingly seasonal side of drinks. Millie Milliken reports.

It’s around about the same time that Mariah starts getting thawed out that people start thinking about having hot cocktails.” Revered bartender Rob Wood is not wrong: come 1 November and bars across the UK begin the countdown to Christmas with cocktails designed to give the people what they want with boozy hot chocolates, variations on mulled wines and ciders and everything in between.

But hot cocktails don’t have to just be relegated to Christmas – Swift London famously serves its Irish Coffee all year round (at between 68° and 70°). But even with the option of other hot cocktail classics to play with (most notably a Tom & Jerry and Hot Toddy) we scarcely see them served outside of the winter season.

The obvious matter of the weather and the UK’s relatively warm spring, summer and autumn months mean that hot drinks often get forgotten for their chillier peers. But there are other challenges to think about too. How do you manage temperature before and during a busy service? How do you optimise sales when people are only having one or perhaps two per order? And how do you elevate the classics?

Up and down the country, bars are subverting expectation and playing with unexpected spirits, ingredients and techniques in their hot cocktails to give them the edge. In both of Nightjar’s London bars (Carnaby and Shoreditch), the team are serving a Hot Walnut Buttered Rum. They have fat-washed Eminente 7-year-old rum with walnut butter, before mixing with Pedro Ximénez sherry, roasted coffee bean and pecan maple syrup and the surprise addition of Empirical Spirits’ Ayuuk.

“It’s got a really distinctive flavour, this vegetal heat that brings a whole new character to the drink,” Nightjar co-founder Edmund Weil says of the pasilla mixe-inspired spirit. There’s also another unexpected trick up the drink’s sleeve – it’s a hot clarified cocktail. “I’ve always loved hot buttered rum… but it doesn’t always look great,” Weil says of the decision to use the technique. “We have all these wonderful bar techniques at our fingertips and with clarification you can have the beautiful flavour and texture and it looks great as well.”

Over in Canning Town, Soda & Friends is about to embark on its first winter season. For its Irish Coffee 2.0, apricot brandy and bayleaf cream are two distinctive variations on the classic, while the Father Todd takes the Hot Toddy and swaps whisky for Chartreuse and adds Earl Grey tea to its water element. For co-founder Nate Brown, elevating the classics meant punching up the aromas. “The thing that stood out to me when putting the drinks together was that fragrance becomes far more important in hot drinks, so we’ve added an extra element of fragrance which often gets overlooked – it’s where we add a little more weight.” They’re also going in on mulled wine (going big on the spice and adding Pimento Dram for more kick) and cider (with 30&40 Double Jus and pear brandy).

At Robert Wood’s Atelier in Birmingham, he’s serving a modern cult classic – the Dead Rabbit Irish Coffee. It is served at 78°C as prescribed by Jillian Vose, who was beverage director of the famous NYC bar until this summer, and who imparted the infamous recipe to Wood. He is also going to be giving guests a Port Negus (taken from The Pickwick Papers) and his version of Wassail, which will be more like a warm Somerset Brandy Old Fashioned. Also in contention his old favourite Strudel, with cider apples, caramelised apples and aged apples.

The question of temperature is central to making hot cocktails. Heat can exacerbate sweet flavours while also making whatever booze you’re using jump more out of the glass, explains Wood. It’s worth thinking about how very cold and very hot drinks can both nullify flavours, but warming can pull flavour out (just think about the fact that we usually taste spirits at around room temperature).

Plenty of thought then must go into what temperature you serve your drink at, but also how you maintain it before and during service. Wood has two water baths running at two different temperatures (65°C and 78°C) to maintain the temperature of his hot cocktails, with 65°C running the stronger drinks or dual temperature (hot and cold drinks). He’s batched and held his Irish Coffee for a week to gauge whether it could make an improvement to or degrade its flavour – and thankfully, it didn’t.

His team also control how much is batched at one time to avoid it sitting around in volumes that could impact flavour. “We’ve made it in 40 portions at a time and we would make batches at least every two days – and often multiple batches.”

At Nightjar, any non-alcoholic elements are held in a samovar to keep them warm before adding the spirit at the last minute – but this isn’t a perfect solution, explains Weil. “You can’t have the temperature too high as you start to lose some of the flavours, so keeping it in a sous vide is helpful to get it to 60-70° and a state where it won’t ruin the flavours.”

When it comes to sales, hot cocktails play a very specific role too. While they might be a reason for people to come into your bar in colder weather, they most likely won’t be the reason they stay. With his data from Irish Coffee sales, Wood knows that guests usually come in and have one straight away before moving on to colder drinks.

“I don’t recall anyone ever sticking with all hot drinks,” he says. “Because of the nature of hot drinks being slightly sweeter, that makes them indulgent.”

And while they might not be your biggest money spinner, they can actually act as an upsell if the price is right. “One of the big challenges at the moment is that a lot of people have got more pressures on their disposable income,” Weil points out.

“There is a real danger for cocktail bars that people will still come, but have one less drink – that is devastating for turnover.” How can a hot cocktail help? Bring it 15-20% below what people would normally pay for a cocktail and make it shorter than your average drink too – “people will see it as a little indulgence to start the evening off with”.