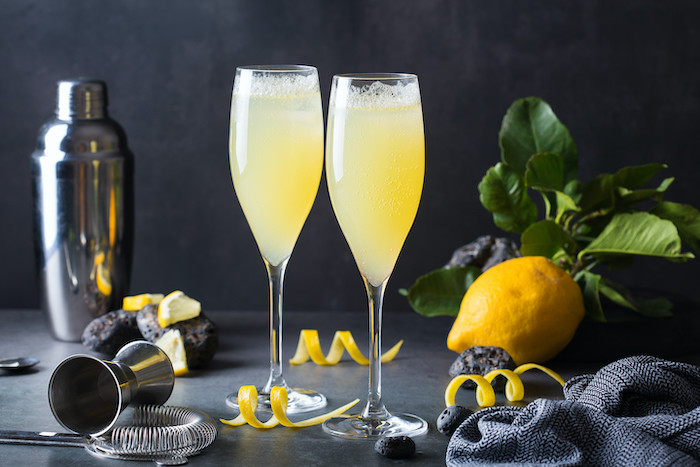 Clinton Cawood tackles, with military precision, a classic named after a field gun.

This celebratory classic has existed in different guises over the years, and the story of its origins, like those of so many good classics, can be a bit hard to pin down.

Let’s start with what we know. The drink is named after the Matériel de 75mm Mle 1897, a field gun better known as the French 75 or Soixante-Quinze. Unlike the drink, there’s plenty of info available about its history, like the fact that it was first used in 1898, that it could fire nearly 30 rounds a minute, and much more, if you’re into that sort of thing. Crucially, it was used by the French army during World War I.

We also know that the drink named after this well-known piece of military kit didn’t much resemble the drink we know today. But after that we start to enter the realm of rumour and hearsay, with tales of the drink being invented on the battlefield, images of officers toasting to the gun that had saved their lives. According to a few – even less verified – stories, the original cocktail was served in the field in spent 75mm cartridges, the flavour of which would presumably make the exact ingredients and ratios a moot point.

Anyway, the drink that’s made it to the present day is a combination of gin, lemon, sugar and champagne, and if that sounds like a Collins with champagne to you, you’d be right. More on that later. But the earliest written reference in 1915 in the Washington Herald describes a drink with gin, grenadine, applejack and lemon juice, calling it a Soixante-Quinze cocktail.

When Belgian bartender Robert Vermeire included it in his Cocktails: How to Mix Them book in 1922, it was now the 75 cocktail, with similar ingredients but different ratios, and substituting calvados for the applejack. He gives credit to “Henry of Henry’s bar fame in Paris” – Henry Tepé – for introducing the drink. Not long afterwards, Harry Craddock published his version, with absinthe instead of lemon juice.

It wasn’t until 1927 that written references start to resemble the classic we know today, starting with a recipe in a publication entitled Here’s How!, which called for two parts gin to one part lemon juice, a spoonful of powdered sugar and topped with champagne.

What’s interesting is that while the previous grenadine version was served in a cocktail glass, this new incarnation was built over ice in a tall glass and topped with champagne – like a Collins.

Somehow along the way, and probably not too long ago, this evolved into a champagne flute, sans ice, but there are a growing number of proponents for its original on-the-rocks serve, Jeffrey Morgenthaler among them. I like Morgenthaler’s spec for the drink too, which uses equal parts gin and lemon juice, half a part of 2:1 simple syrup and two parts champagne.

Given its evolution over the years (at some point cognac became involved, and there’s no shortage of variations such as the French 95, French 125, etc), it’s unsurprising that contemporary bartenders have continued to adapt the French 75. Among the most prominent is the bottled version that’s become the signature drink at London’s Three Sheets.

“We wanted to put this in bottle, so we could serve the drink at the table,” says Max Venning. “We wanted to clarify it to get the carbonation level higher, and make sure the drink stays fizzy till the last drop. We added the verjus to help with clarification, but the flavour it added created a real depth of flavour that we loved.”

Mix all the ingredients except the lemon juice and water and stir to combine. Add lemon juice and leave to settle for about 20 minutes for the sediment to split out. Strain through a coffee filter to clarify and add water.

Add to a two-litre carbonated water bottle and charge using a ball lock connection to a CO2 canister at 45psi. Place in the fridge and allow to settle for 20 minutes. Release the gas and repeat the process twice.

Allow to settle in the fridge for an hour at least, and pour very slowly into a clean champagne bottle, cork and store in the fridge.