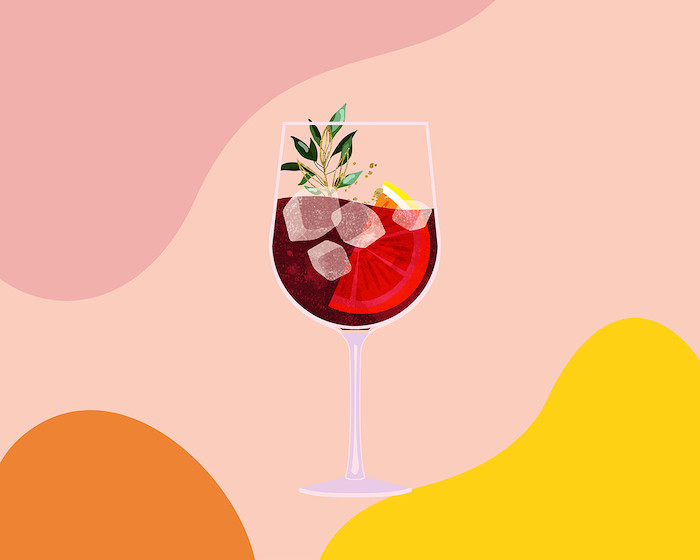 Joe Wadsack challenges bartenders to drop their preconceptions and be more experimental in their approach to using wine in cocktails.

Mixing with wine is an ancient keystone in the glorious Rialto Bridge of booze. Take Stuart ‘Holiday’ Hudson’s recently (and I sincerely hope, temporarily) departed Bar Liber in Islington, for instance. A wine bar for cocktail lovers. It was such a simple but brilliant idea, borrowing heavily, but reverently, from Jerry Thomas’s epic early guide to drinks from the mid-19th century.

In this essential tome, alongside the other great guides, such as those from David Embury and Harry Craddock, Thomas eloquently explains that, prior to the birth of the modern cocktail, mixing vermouths and all sorts of classic wines together – a practice abhorred today – was de rigueur.

Throwing drinks was also standard, presumably resulting in Thomas’s most famous creation, the Blue Blazer. Virtually no mixed drinks of the Victorian age contained raw spirit, with the exception of the odd brutal punch or two.

For those who missed it, Hudson recreated the craziest Thomas wine punch for Bar Liber as a signature pour. The ingredients are now, by comparison, so expensive that Stuart pre-batched it into single serves, and finished them off in a large Collins glass with a float of Dom Perignon 2010 and a fresh pineapple and strawberry garnish.

At £100 a serve, the drink reads like a multiple pile-up in a Mayfair wine bar. In fact, having tried it alongside Sly Augustin, who provided the rare rum for the cocktail, I can attest that it was sublime in a way that almost defied logic. The recipe? 25 year old Appleton rum, Hennessy Paradis Impérial cognac, three bottles of Tokaji Aszu 6 Puttonyos, a bottle of  40-year-old Blandy’s Sercial Madeira, four bottles of Château Lafite (at least £750 each on their own), fresh pineapple and orange juice. I mean,
what now?

The point is that, while we talk about how some drinks are too complex and referential to be blended together, it is in fact only the price of the wines, in this case, that has us believing they shouldn’t be used in a mixed drink. Sure, Château Lafite is sublimely elegant, and highly sought-after, but in reality no more or less complex or mixable in base terms than any other Pauillac, Bordeaux, or fine French red wine. Which got me thinking…  What single factor is it about a wine that decides whether
it is mixable or not?

The first, and absolutely most important, attribute is consistency. The reason three grand’s worth of a particular claret worked so stinking well in this punch was that Jerry Thomas had used the very same wine, made the very same way before. Wines offer a notion we like to call “a sense of place”, the French term for which is “terroir”.

Presuming that the number of identical parameters that make Lafite now (eg type of soil, amount of shade, proximity to trees etc) or when Thomas was throwing flames about in the mid-19th century, outweigh the different ones (eg slight differences in weather from year to year, or a slightly different blend of grape varieties) then an expert taster, like me for instance, can tell that they come from the exact same place.

No different to an artist painting two subjects. The results are different, but clearly come from the same source. I can’t personally afford to back this claim up, but I’m confident that if Thomas name-checked Lafite in the recipe, he did it with good reason, and other similar wines just wouldn’t cut it.

Perhaps lack of consistency from year to year in certain wines is the biggest reason the practice of using wine in cocktails is not as common as it might be. Bartenders only seem to use those wines where consistency is guaranteed.

Take champagne cocktails, for example. The largest Champagne houses go to great lengths to ensure consistency from year to year. It wouldn’t do for Moët & Chandon to make more than 20 million bottles of wine that tasted different every time. This is why I always use Moët, if I can, in my own champagne cocktails, as it is so consistent – and widely available. What other wines do bartenders use on a regular basis? Madeira, sherry and port – all blended to taste as consistently identical as possible.

Bear in mind what wine, correctly used, brings to the party. A sense of tension and drama, levels of complexity and nuance that only time and conditioning can create and, perhaps most relevantly, a sizeable reduction in the alcohol content, while maintaining concentration of flavour. Come on everyone! Get your wines and vermouths out. Let’s see what you can really do.