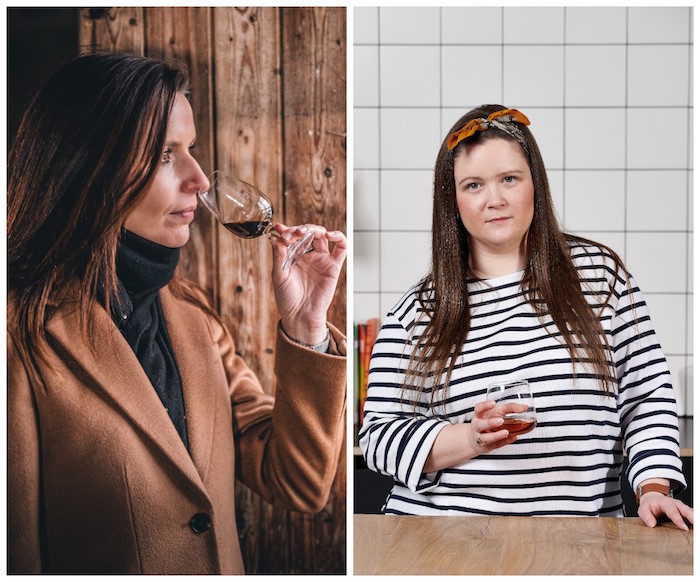 1/ Who are the pioneers over the centuries that have inspired you on your journey?

Kirsteen Campbell: I have been lucky enough to have been mentored by some incredibly talented whisky makers and I remember being in awe at their ability to bring so many flavours together to create an exceptional whisky. Standing in the sample room with John Ramsay (Former Master Blender for Edrington), I was amazed by his ability to curate a variety of maturing casks to create a consistent whisky every single time.

Having such an array of colour and different characters available yet bringing them together in the right balance of flavour and to natural colour really blew my mind, but totally inspired me.

On a personal level, I would say my granny. She left the Western Isles, in Scotland, aged 16 to go to London and train as a nurse, working there through World War II. Following the war, she moved with my grandad to Caithness, where she lived for the rest her life, only retiring aged 83 from her role as postmistress. A very ‘hardy’ lady as we would say in the north.

Diane Stuart: I wouldn’t say I’ve been inspired by any pioneers in the typical sense but instead inspired by the fact that I’ve always worked with women during my time in the whisky industry, so I’ve been fortunate not to see women underrepresented in the areas I’ve worked in.

As a tour guide, the 5-star Visitor Centre I worked at was led by a team of women and I then moved on to spend almost 7 years working at The Scotch Whisky Research Institute as part of a team of scientists, with women working in scientific roles and in senior positions.

When I started with Edrington in 2016, I worked for Kirsteen Campbell. Kirsteen taught me much of what I know today but also showed me that there are no barriers to what we can do, look at her career…why would I have any reason to believe that women can’t do great things?

2/ As modern-day pioneers, what was it that attracted you to the industry?

Kirsteen Campbell: I was fortunate that my first laboratory role was with a spirits company, analysing Scotch Whisky, vodka, gin, and rum samples. I became fascinated from that point with the complexity of Scotch Whisky, the development of new make spirit character through maturation and the evolution of flavour.

Diane Stuart: I actually didn’t come into the whisky industry with a firm idea that this was where I wanted to work. When I left university I explored a couple of scientific options including the oil industry and hospital laboratories, in fact I didn’t even know I could apply my science degree in the Scotch whisky industry. It was only when I was given the opportunity to tour round a whisky laboratory facility during my time as a tour guide that I realised all the work that went on in the background and it fascinated me.

3/ Do you think up to now there have been hurdles preventing female progression in the whisky industry and, if so, how have you overcome them?

Kirsteen Campbell: It is exciting to be part of The Macallan’s story as the first woman to be Master Whisky Maker and custodian for The Macallan since it was established almost 200 years ago. I hope this inspires other women to challenge perceptions in the whisky industry. Our Lead Whisky Maker, Sarah Burgess, is also a woman, as is Polly Logan, one of our whisky makers and we are proud to have gender diversity within our Whisky Mastery Team which comprises three men and three women.

Becoming a whisky maker takes passion, hard work and dedication, as well as natural sensory ability and is a fantastic role for both men and women.

Diane Stuart: I myself have been lucky enough not to encounter these hurdles on my journey so far…although maybe I have, I’ve just not seen them as hurdles.  I can be quite determined, so if I want something I’ll do everything I can to achieve it.  If someone thinks I can’t do something, I’d go out of my way to show them that I can.

4/ What advice would you give to women looking to enter the whisky industry?

Kirsteen Campbell: My advice wouldn’t be specifically for women, but I do think this is an exciting time for the whisky industry and it is always interesting to see how it changes and develops to reach new and different consumers. I would encourage those looking to get into the industry to get experience – even if it is distillery tours, go along to tastings, research the companies.

All this makes you more aware of the nuances and individuality and history of each whisky brand. If you want to go for a qualification, the IBD – Institute of Brewing and Distilling – is a worldwide organisation and organises specific courses on distilling, brewing, cider making.

Diane Stuart: Love what you do!  When you’re passionate about something you’ll give it your all.  Also, take every opportunity to learn and get experience where you can, there’s always more knowledge out there and it can spark an interest in you that can lead to some interesting places.  I chose to study Forensic Science because it interested me…not because I thought it would lead me to the job I do now.

5/ What skills do you need to 'make whisky' and how do you think the role has changed over the years?

Kirsteen Campbell: Sensory ability is so important for a Master Whisky Maker and it is something that you are born with. You can train your vocabulary and learn ways to describe the aroma, but the sensory awareness must be there. It is important to be able to identify key sensory characteristics including off-notes, so that you can create the best tasting whiskies with flavours that really work together.

It is a fascinating part of the job and everyone has a slightly different sense of smell, so it is always important – and interesting – to get different opinions from the Whisky Mastery Team.

Diane Stuart: Sensory aptitude is a must -you must have the ability to smell things and be able to describe what you’re smelling.  This and the many other skills to being a blender are built up over time and through experience and the best way to do this is being immersed in the process; picking up samples at every opportunity, nosing and tasting the array of flavours that can be found in whisky, understanding where these flavours come from and the complexity of bringing different flavours together to produce a whisky.

Blending is a skill that can’t be taught in the space of a short course. I’ve learnt most from experience, working alongside fellow blenders and whisky makers at the bench.  Little can come close to being hands on in production, learning from others and of course asking questions wherever possible.

Over the years I think we’re seeing more and more women in whisky maker/blender roles (as well as in other technical roles), and nowhere has this change been more evident than in our own whisky making teams, where women now outnumber men.  I also think there is less emphasis on ‘one nose’ knowing everything.  Sensory is so subjective and varies between individuals that gathering opinions from a team of whisky makers/blenders is exceptionally valuable.

6/ With more and more women rising to leadership roles in whisky, do you see this having an impact on consumer perception, laying to rest outmoded gendering of the spirit?

Kirsteen Campbell: Globally more women are enjoying whisky and I am pleased to have witnessed a shift in whisky being perceived as a spirit only consumed by men. There is also a growing number of women working in whisky making, and I am proud to be part of this.

Diane Stuart: There have been female blenders and whisky makers at the forefront of big brands for many years now, yet the perception still exists. For it to impact on consumer perception it needs to be visible to the consumer and although whisky maker/blender roles are, many leadership roles in the whisky industry aren’t consumer facing.

I do think there is progress. Recently I’ve seen more content on social media being hosted by females in the industry and bringing together women working in a range of roles within the industry, but there’s still a way to go…I still get asked “but do you actually drink whisky?”

The new and improved Naked Malt bottle recently hit shelves and is available to purchase now via your nearest wholesaler. Through the re-branding, it's hoped a new generation of whisky drinkers will be encouraged to 'Live Naked' and inspire freedom to try whisky their way.