How the cocktail bitters market has changed
by Clinton Cawood / 13 May, 2021 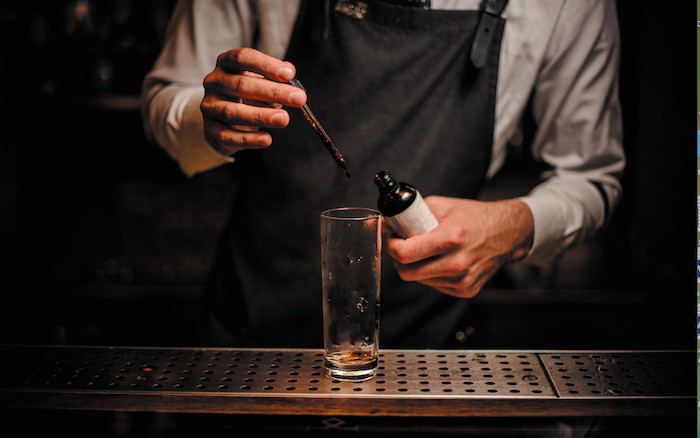 You might not see as many encyclopaedic bitters selections in bars nowadays, but the category has plenty of life in it, says Clinton Cawood

There was a time, and not too long ago either, when you could hardly find a bar that didn’t have a serious bitters-collecting habit. You’d encounter the tiny bottles lined up on the bar and see them liberally mentioned on cocktail lists. New producers were springing up all over the place, with wide ranges of increasingly unusual products.

Today these large collections are fewer and farther between. The bitters themselves haven’t disappeared, but bartenders are using them differently and stocking them differently, too. For some, it’s about focusing on the classics, with Angostura continuing to reign, while for others, changing drink styles mean a different approach to this cocktail ingredient. Still others are making use of a wider range of ingredients when they’d previously have looked exclusively to bitters.

The Gibson’s Marian Beke considers his use of cocktail bitters to have changed, even broadened, in recent years – in part as a result of his move from Nightjar. “There are many classics and twists on classics on the menu at Nightjar, so we would use more aromatic bitters there, while at The Gibson we focus on Martinis and signature drinks that have a savoury element,” he says.

For the Martinis, he says, that means more citrus and floral flavours, while the signature drinks call for more savoury and umami styles of bitters, as well as drawing more broadly on extracts and tinctures.

The Breakfast Group’s Damian Williams sees this broader approach too, with more ingredients entering the realm previously occupied solely by bitters. “An obvious example is absinthe, which pretty much every bar has in a dasher bottle on the bar top now, or saline solution, which is added in tiny quantities to tweak the drink flavour slightly,” he says.

Other drinks categories have the potential to bring similar flavours to the table too. “The huge growth of the amaro and vermouth categories has meant that there are dozens of new ways to add bitterness and a herbal, spiced complexity to drinks without using traditional cocktail bitters,” adds Williams.

Beke agrees: “These days there is a bigger choice of liqueurs, amaros, cordials and more that can help to enhance flavours of drinks in a similar way to bitters, so it’s up to the bartender’s personal preference.”

But Williams believes that bartenders might be reaching less frequently for bitters as a result of the rise in homemade ingredients, given the greater control over a particular drink’s flavours that these provide. “The idea of adding a little je ne sais quoi to add complexity and depth to a drink is less important,” he says. “Whereas maybe five years ago a bartender would add plum bitters to give a hint of plum, now they are more likely to infuse one of their ingredients with dried plum.”

While approaches such as these to bartending are indeed changing, cocktail styles are changing along with them, with lighter drinks – both in terms of flavour and in terms of abv – undoubtedly becoming more prevalent in recent times. And, while this isn’t necessarily bad news for bitters, it does require looking beyond their traditional role in cocktails.

“I still use Angostura and Peychaud’s in the same way I always have, in stirred-down and brown drinks,” says consultant Carl Anthony Brown. “But they make a great accompaniment to a number of other styles of drinks too, such as sours, fizzes and more.”

Consultant Paul Bradley agrees. “I think that, due to the huge variety of bitters currently available, you can use them to pep up or add depth and complexity to any type of drink. A little goes a long way in lighter drinks, so they can be especially valuable there,” he says.

The fast-growing world of low-abv drinks is indeed an opportunity for the bitters category, in spite of the category’s classic, boozy associations. “It’s possible to make entire low-abv drinks based around bitters with fantastic flavour,” says Brown. “Their unparalleled ability to reinforce flavour should be used to innovate within the low-abv drinks sector.”

And if it’s a truly zero-abv drink you’re after, Beke points out that there are not only options within the core cocktail bitters category, but even wider choice when it comes to herbal botanical extracts more generally.

At Milk & Honey in London, for example, the focus on classics clearly informs the concise list of bitters in stock. “Angostura, Peychaud’s, orange bitters and absinthe in dasher bottles have been on the bar top for at least the past four years,” says bar manager Pierre-Marie Bisson. “Here we’d rather use fresh products, but obviously when making stirred drinks you’d rather use bitters – although Milk & Honey NYC had some pretty fun stirred drinks with cucumber or mint inside the mixing glass, for example, like the Archangel or Cobble Hill.”

For those going for a wider or more eclectic approach, the bitters category does offer more freedom to bartenders than some other drinks categories, Beke points out. “Our guests will call for brands, or categories of spirit, such as tequila or scotch, so we have to have them, but it’s very rare that someone will ask you for cocktails with a specific brand name of bitters.”

Meanwhile, as attitudes to bitters are changing, the category itself continues to offer new and interesting products. Beke himself launched his own Electric Bitters a couple years ago, for example, with buzz button flowers bringing a physical sensation.

With the variety now available, new approaches to using them, and the potential they offer for contemporary drink styles, we may just see bitters making their way into more cocktails, and not less – even if they’re not part of big collections lined up in vast quantities on the bar.