How magic and drinks have always shared a stage
by Charles Spence / 10 January, 2020 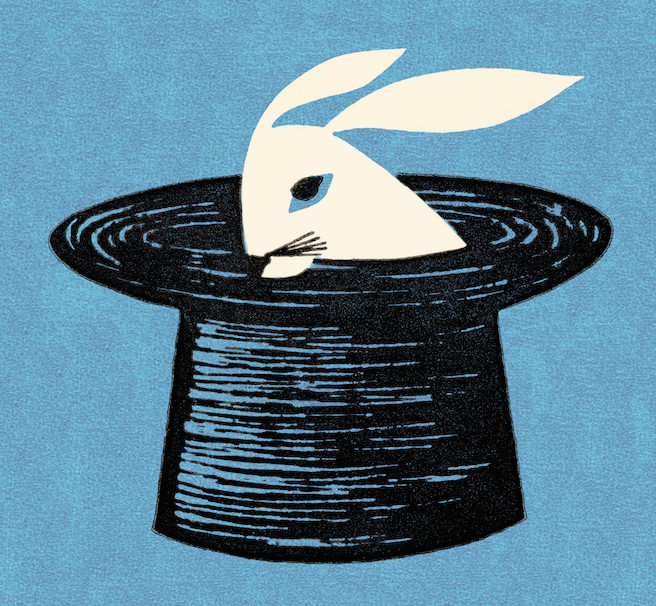 The art of illusion has long been associated with the bar world. Charles Spence goes behind the scenes.

Magic and drinks share a surprisingly long history. In Al Capone’s time, for instance, magic tricks were commonly performed from behind the bar in what subsequently came to be known as Chicago Bar Magic. This involved a combination of humour and magic that was designed to encourage consumption. However, while the magic and drinks were in close proximity to one another, the tricks themselves bore no relation to the drinks being served.

Bringing the magic a little closer to the drinks, magicians such as Think-a-Drink Hoffman, for a time the best-paid barman in the world, would mystify North American audiences by pouring a host of different drinks from the same cocktail shaker, adapting his routine to non- alcoholic drinks during the Prohibition era. This was a version of the Obliging Kettle illusion, popularised on the London stage by magician David Devant in the opening years of the 20th century. Yet, once again, while the service element of these illusions was most definitely magical, and occurred in the context of a magic show, the drinks themselves were mundane.

Magical serves moved to the bar scene a few years ago when Artesian in London introduced its amazing levitating cocktail. The Gong Bar in the Shard has also been serving drinks that appear to levitate magically over the surface of the table. However, once again, while the Artesian cocktail itself undoubtedly tasted great in the hands of Alex Kratena, the customers could in no sense be said to be drinking magic. But what would that be like? Wouldn’t it be intriguing if the multisensory experience of tasting the cocktail was itself magical?

Two bars have gone full-on with their magical serves. First came Bar Paradiso in Barcelona, which opened its doors in 2014. More recently, the Beaufort Bar at the Savoy Hotel in London has just come out with a magical menu too. As described in the World’s 50 Best Bars, at Bar Paradiso some cocktails change colour, while others change taste, transitioning from sweet to bitter. Some cocktails are hard to find, others are guillotined in half in front of the drinker’s eyes, while the classic twist Super Cool Martini, made using a proprietary technique, sees an iceberg magically appear in the glass when the liquids are mixed.

Meanwhile, the three-part Interpreted Magic menu at The Savoy’s Beaufort Bar is based around the three key elements of a magic trick – known as the pledge, the turn, and the prestige. The lighter drinks can be found in the first part of the menu, the more intriguing drinks in the middle section. However, while the drinks themselves have names that are linked to magic – The Mentalist, Merlin’s Magic, and so on – they apparently do not incorporate any magical elements.

Working as I do with both mixologists and modernist chefs, magic would seem to be a more natural bedfellow for drinks than dinner. That said, though, some notable chefs, including Heston Blumenthal, Michelin-starred Denis Martin, and London’s very own Jozef Youssef have been bringing magic to dining tables with the likes of Blumenthal’s Hot and Iced Tea – a drink that is hot, but when you rotate the glass 180° is ice cold instead. Youssef is currently serving light bulbs that are smashed on the dining table as one of the desserts. Meanwhile, Martin serves a dish called Rien. Nothing is poured from a sauce boat into an empty bowl, however, bring the soup spoon up to your lips and your mouth will be flooded with the intense flavour of gazpacho, from a transparent coating that has been added to the spoon.

One of the other popular tricks is the colour-changing drink. This, for example, on the menu for guests at The Cauldron, a Harry Potter-themed bar in New York and London. The novelty of such pH- dependent colour changes has now gone mainstream with the likes of bestselling Yumchaa tea, which is blue when hot water is added, but turns a more appealing shade of purple on the addition of a little lemon. Starbucks in Asia came out with its colour-changing Butterfly Pea Lemonade Cold Brew.

Practically-speaking, one of the challenges with the notion of edible magic is that magic mostly seems to be something that happens ‘out there’, in the world around us, not inside us. Hence, when some creative souls have played with miracle pills to make sour lemons taste incredibly sweet, this is due to the miraculin in the pills sourced from a West African fruit tree that binds to the taste receptors. The effect is surprising, but it is also so long-lasting that it doesn’t really fulfil the definition of magic which, according to author Jason Leddington, is “a form of theatre that apparently presents impossible events and at the same time represents them as impossible. In other words, magic apparently presents impossibilities – as impossibilities”.

While magic shows and performances would seem to be more popular than ever, it is worth bearing in mind that not everyone appreciates such a playful approach to bar craft. There is, after all, a danger that it can be seen as detracting from those who want the consuming public to take the skill and craft of making a great-tasting drink more seriously.