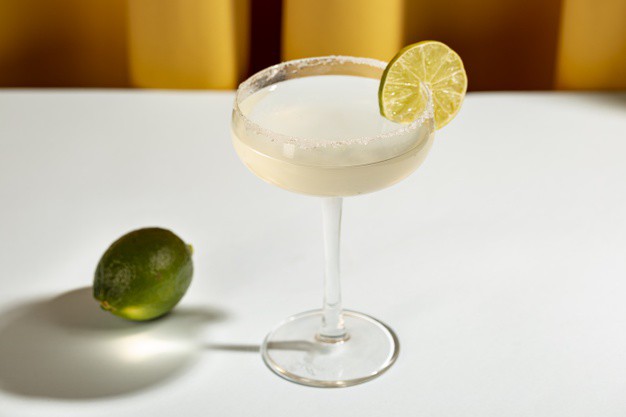 Oh the poor Margarita. What horrors this simple drink has had to endure in its short lifetime – twisted with sugars and fruits, blended with ice and lavished with salt, served in pitchers to screaming college students, and featured in every internet meme relating to drunk and dissatisfied housewives. Dare we even mention the dark years of sour mix?

In its original version, with tequila, lime and orange liqueur, it is simply one of the tastiest cocktails around, holding its extremes of sweetness, sourness and bitterness in a thrillingly tenuous balance. But how did it go from being yet another historical version of a sour to a symbol of holidays, carefree afternoons and bad decisions on a Tuesday night?

In the few years after the US shook off the shackles of Prohibition, we see a new drink starting to be spoken about, passed along on the lips of adventurous travellers and journalists who dove south of America’s border into Mexico. It was known then as a Tequila Daisy.

A Daisy is a type of sour that had long been doing the rounds in America’s cocktail bars before they experimented with becoming a booze–free nation. It took the form of spirit + orange liqueur + lime served straight up, or spirit + grenadine + lime served on the rocks. Usually the base was brandy but we see whiskey or gin rear their heads in the history books from time to time. Once America stepped boldly on to the wagon and abandoned all passion for cocktails (at least legally) we see its more sensible citizens scurrying down to a little golf resort outside Tijuana where the Sunrise Tequila, using tequila, lime and grenadine, becomes the beverage du jour. Yes, the country that offered them sanctuary from alcohol–free boredom is the one they now want to build a border wall on. A little thankless if nothing else.

But back to the history. From that golf club we know the formula for Daisies had made its way to Mexico and met its new best friend – tequila. From there the two go skipping hand in hand back up north post-repeal, and surface in New York. But it was the orange liqueur version of the Daisy that survived, not its bedfellow made with grenadine. This is important because the Spanish word for Daisy is Margarita, which is exactly what everyone began calling it.

As a fun side note, confusingly an almost identical drink, a Picador, which calls for exactly the same ingredients in the same quantities, was first published by the United Kingdom Bartender’s Guild in the Café Royal Cocktail Book of 1937. Had one of the American bartenders who fled to London brought a Daisy recipe with them? We might never know, but a loyal Brit could make the case that Margaritas were being shaken on UK soil before they were shaken in the US. Could, we said. Could.

So now we have the Margarita and it’s only going to increase in popularity. As its fame spreads so too do the numerous twists and renditions of this staple cocktail. From the orchard–rich Toreador, which uses apricot brandy, or the subtle marzipan of the Infante, the spice of an El Diablo or the addictive smoke of a mezcal replacement, all have earned their place on cocktail menus the world over. But none are as loved or lauded as a Tommy’s.

Invented in a San Francisco institution and eponymously named for its birthplace, the Tommy’s is reputed to be even better than the original Margarita, especially for tequila and mezcal lovers as it removes the orange sweetness and replaces it with vegetal agave syrup, made from the same plant which gives us tequila.

The Tommy’s marks the decided shift in how we love and consume not just Margaritas, but all cocktails. Back when Daisies were first invented we named drinks for their sweetener and adapted the spirit around it. We placed more importance on the orange liqueur than whether it was drunk with brandy, tequila or gin. Nowadays we care so much more about that base product.

“Tequila HAD to be the focus of the cocktail,” Julio Bermejo, Tommy’s inventor, tells me. “That was it. I was not in the business of selling triple sec or fancy French orange liqueurs.”

We’ve come so far in how we think about tequila and Margaritas that Bermejo even recommends differently aged versions of the spirit for different occasions.

The Margarita is clearly not disappearing from cocktail menus or popular culture anytime soon. After all, are you even a bartender if you don’t immediately recall TV’s Archer screaming out the five key ingredients after spitting out his sour–mix laced version (tequila, cointreau, lime juice, ice and kosher salt, obviously)?

“In the US it is said that in two years tequila will overtake rum as the third largest selling distilled spirit,” says Bermejo. “A great part of this is driven by the Margarita. The Margarita, like a well-made Daiquiri, will always sell because it is thirst quenching and refreshing. Add a stimulant such as tequila instead of rum and I still do not understand why people drink depressants.”

If that doesn’t say something about the future of this drink then not a lot will. If it has the power to overtake rum in America, or at least contribute to that, it’s doing something right.

Oh the Margarita. You may have been through some unsightly times (we’re sorry about the college pitchers) but you will always be the king of a good time.

1 part agave syrup that has been cut 1:1 purified water

Served on the rocks