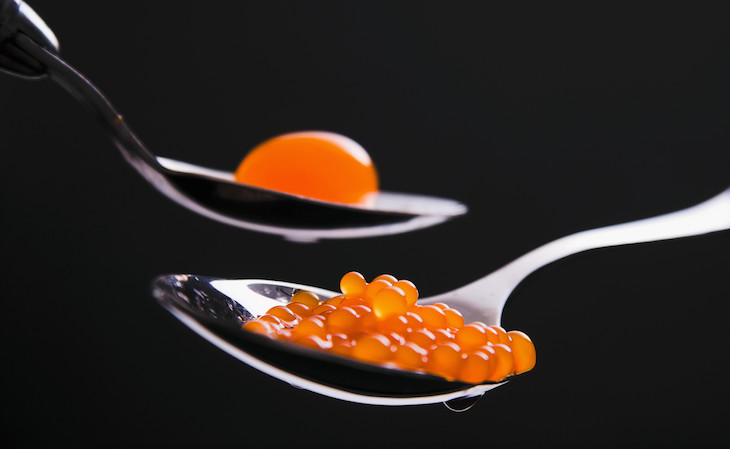 Edible packaging has its place, says Professor Charles Spence, but is that place really in alcoholic drinks?

Much merriment, not to mention a fair amount of disbelief, was expressed by commentators in both the popular and trade drinks press following the launch of Glenlivet capsules as part of London Cocktail Week’s 10th anniversary late last year.

The Glenlivet capsules contained cocktails created in collaboration with Alex Kratena and Monica Berg of London’s Tayer + Elementary. According to Kratena: “The cocktail capsules are unique and push the boundaries of how drinks are served”. While that might be true, from where I am sitting this looks and feels more like a solution to a problem that simply does not exist. It is not that edible packaging and/or the conceptually-related spherification technique have no place in the world of high-end food and beverage design, but a very clear reason is needed to justify the faff and loss of olfactory sensation that such an approach necessitates.

Spherification has long been used by modernist chefs. Indeed, the spherified olive served as something of a statement of intent by the world-famous early modernist Spanish chef, Ferran Adriá and his disciple José Andrés. Notice here, though, that the technique is used to playfully surprise the diner at the start of the meal through the use of culinary trompe l’oeil. At the same time, however, what this technique also allows those working in the kitchen to do is to intensify the flavour hit when the sphere suddenly (and quite possibly unexpectedly, at least the first time) explodes in the diner’s mouth. A memorable experience that anyone who has tried will not soon forget.

More recently, my close colleague, the London-based gastrophysics chef, Jozef Youssef, has used spherification to create four colourful spheres of taste. Those diners lucky enough to score a seat at The Chef’s Table have to try to guess which coloured sphere belongs to each of the four basic tastes (sweet, sour, bitter and salty). Spherification is useful here as it helps prevent diners from surreptitiously smelling the spheres prior to popping them in their mouths. And, once again, it helps to add an element of surprise, or shock, when the sphere finally dissolves in the diner’s mouth. The qiuestion is: did they guess the taste right or not?

Both edible packaging (or capsules) and spherification, then, prevent the orthonasal sniff. This works fine in the case of olives, which are not necessarily especially olfactorily-redolent (smelly) after having been brined. It also works in the aforementioned four tastes amuse bouche where the guests are not meant to smell anything. But nosing is such an important part of the whisky-drinking experience that eliminating it, as in the case of the Glenlivet cocktail capsules, would really seem to be detrimental to the tasting experience. There is no slow savouring here, just one mouthful and it is all gone.

One often comes across the claim that 75-95% of what we taste we really smell. There are few drinks where that claim would seem to hold more weight than whisky, and so presumably also the whisky-based cocktails such as those created by Kratena and Berg. [Vodka- based cocktails would, I think, have been something else entirely, and likely would not have been greeted by quite so much disbelief.] We have, of course, been introduced to alcoholic cocktail jellies (or gummies) from the likes of Smith & Sinclair and Tippling Club Singapore. They, at least, have the advantage of lingering on the palate for longer than one of these liquid capsules will.

Flavoured caviar spheres floating in one’s drink, or more often found lurking at the bottom of one’s glass, are popular among the more inventive (molecular) bartenders. It can undoubtedly help to add some visual interest to the serve as well as enabling some degree of flavour segregation in the glass. However, ultimately, this kind of segregation might be better left to the manufacturers of striped toothpastes and novelty drinks.

Spherification in cocktails might possibly be the use of science/technology for its own sake, to push the boundaries of what a cocktail can be, but without delivering a functional benefit in terms of the tasting experience itself. In short, then, there is probably no reason to give away your cocktail glasses just yet.