How the Piña Colada turned from kitsch to cool
by Jane Ryan / 16 September, 2020 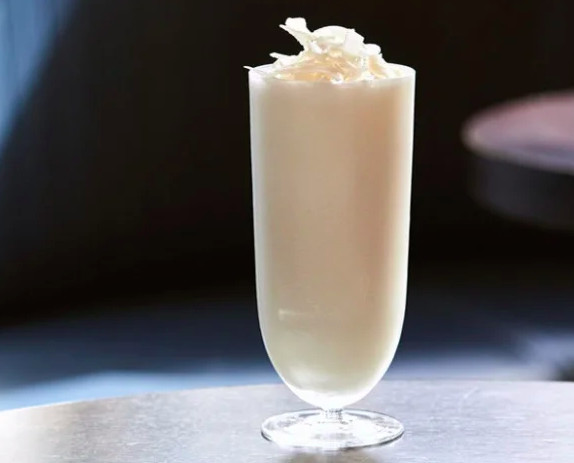 Jane Ryan chronicles the adventures of the Piña Colada - from Puerto Rico to East London and everything in between.

There’s a real punk attitude needed when drinking a Piña Colada outside of the Caribbean. Sipping a creamy drink from a hollowed-out fruit – cocktail umbrella poking to one side – in a fancy bar is about as anti-establishment as you can get in this world of Martini trolleys, low-cal champagnes and Fernet Branca coins.

Liking a Piña Colada is the same as liking foie gras, properly made French onion soup and truffled honey. Which doesn’t sound very punk at all, except it sort of feels like it when every second influencer is showing their “what I ate in a day” and it has fewer calories than your elevenses. Give me Coco Lopez, cream and lashings of rum any day.

Which isn’t at all close to what the drink started out as, by the way. It’s no secret that piña colada translates as strained pineapple, but our earliest reference for the cocktail is to a Cuban drink in 1922 which used “the juice of a perfectly ripe pineapple – a delicious drink in itself – rapidly shaken up with ice, sugar, lime and Bacardi rum in delicate proportions.

What could be more luscious, more mellow and more fragrant?” mused the author of the article published in Travel magazine, December 1922. Still known as a Cuban Piña Colada, this drink exists today, and is akin to a Pineapple Daiquiri served long. As to the creamy holiday-vibes concoction we know, that came together in Puerto Rico and comes down to a scrappy fight between three bartenders.

The facts: Ramón Pérez says he came up with the cocktail on August 15 in 1952 at the Caribe Hilton Hotel’s Beachcomber Bar in San Juan. Pérez said he had the idea of mixing the already established pineapple and rum combination with the newly available Coco Lopez. However, his colleague Ricardo Garcia disputes this, claiming the drink as his own.

The story becomes more complicated when you factor in Barrachina, a restaurant in Old San Juan which says its bartender, Ramón Mingot, invented the Piña Colada in 1963.

Before we weigh in judicially, let’s chat about Coco Lopez. This product we’re all very familiar with was invented by scientist Ramón Lopez-Irizarry to solve the issue of extracting coconut cream from the pulp of a coconut, a hugely difficult task. His solution was to blend the heart of the coconut with sugar at the perfect ratio and temperature to replicate a dense and delicious cream – and his community loved it. By the early ’60s the island of Puerto Rico was practically drowning in the stuff, from the dishes to the drinks.

It’s easy to imagine that the Cuban Piña Colada was being enjoyed in Puerto Rico and more than one genius had the idea to add Coco Lopez to the mix. After all, that’s really the only difference between the classic drink we find in the 1960s and the cocktail referenced in the 1922 article. Perhaps, cynically, I might suggest both the Hilton Hotel and Barrachina restaurant use the story to their marketing advantage rather than trying to preserve a historical moment.

Having found the light of day, and delighted tastebuds around the world, the Piña Colada then became a bit daggy. Its holiday serve was deemed gauche, and the creamy texture relegated to far-flung beaches as we went through our cocktail renaissance – a bit like a moody teenager – and forgot all about the pleasures of a good blended cocktail. We pick up the story again in the 2010s, when Slushie machines regained their coolness and bars started to want to have fun again. I suspect cities the likes of Manchester have always been better than London at that give-a-fuck fun attitude the whole time anyway, places where you could genuinely like a Piña Colada, while in London we had to like them ironically for far too long.

As the joy of drinks came back we were gifted gems such as London Edition’s Clearer Colada, which looked like a Martini, the Absinthe Colada from New York’s Maison Premiere (Facebook pic required or you weren’t even in NY) and we can’t possibly put this story in print without mentioning the Champagne Piña Colada at Coupette. It’s a mistake to think the Piña Colada’s story ended with Ramón – Pérez or Mingot – and it’s a delight to think bartenders today are still writing and shaping the history of cocktails with each clever tweak, addition, clarifi cation, or even splitting it 50/50 vertically in a glass with a Strawberry Daiquiri.

So, it’s still just about summer – the park’s calling, Sundowners on the balcony are beckoning, the Nutribullet you swore you’d make morning smoothies with throughout lockdown is begging for a dust-off, and really the world’s feeling like it’s in the very worst state we could have predicted a year ago... So, make a Piña Colada, try on its joyous holiday vibe (it might suit you), contribute a tweak or two to bartending history, or stick to the OG and pour it into those hollowed-out pineapples you always keep in the freezer should a Colada moment present itself.

Want to go full punk? Try Bompass & Parr’s Nuclear Piña Colada, and don’t forget to pair it with your Docs.

Blend all the ingredients together in a blender and pour into a chilled glass/frozen hollowed pineapple. Garnish with a pineapple wedge, a cherry and a cocktail umbrella.