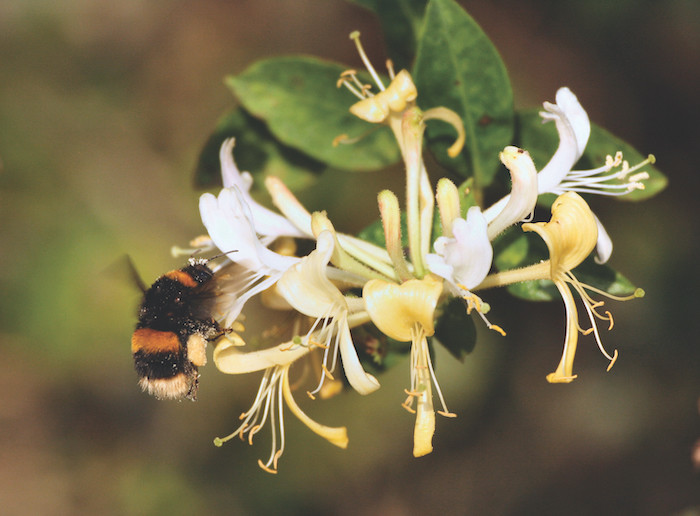 Before the fruits come the blossoms. And in summer the English countryside, the hedgerows, and even urban green spaces are awash with alluring colours, scents, and potential ingredients.

Honeysuckle is one surprise. Its bright pink and white trumpets literally drip with nectar. Its honeyed aroma lives up to its name. It is surprisingly edible. Since some species of honeysuckle are invasive and all are aggressive climbers that tend to overwhelm slower-growing plants, all are fair game for foraging.

As is the case with most field flowers, their aroma is most intense in the morning – a trick for attracting pollinators. You want the blossoms only, separated from any greenery and unopened flowers. A couple of handfuls – about 150g – is enough to simmer in 500g sugar and 500ml water on low heat for 20-25 minutes. Once it is cool, you can decide if you want to make a syrup, adding two parts sparkling water to make it into a soda; or adding an equal measure of gin or vodka to create a liqueur.

Meadowsweet is one of our favourite summer scents. Growing prolifically in ditches and other moist areas, its clusters of tiny flowers look like pointy tufts of cotton, emitting generous wafts of sweet almonds and vanilla. It took us a couple of summers to work out where this incongruous aroma was coming from and to finally identify the plant. But it was worth the effort. It is used in traditional medicine for headache relief and treatment of many other maladies.

Remarkably, aspirin used to be made from meadowsweet as it is very high in salicylic acid (thus, it must be avoided by anyone with an aspirin allergy). The young leaves have a watermelon flavour, although it is sometimes overwhelmed by an antiseptic taste. While you might give the leaves a pass, the flowers can be handled like honeysuckle. It might seem a bit fiddly to get the flowers off the stems, but the effort is worth it.

One more surprising summer flower common in rural and urban hedges (and in most garden stores) are the flowers of the lime tree. Not to be confused with the citrus trees and fruit of the same name whose blossoms are also wonderful to work with but not common in Britain, the lime tree (Tilia cordata) produces small greenish flowers in summer. These sweet blooms are very popular in France, both for their flavour and for their sedative, anti-anxiety properties. In fact, they were used in field hospitals during the Second World War.

Bilberries are more common in northern Europe. About 20% of Sweden’s landscape contains bilberry bushes. However, you can find this close cousin to the blueberry across the UK, too. They are not as common in shops: they are juicier and softer than blueberries, so more difficult to commercially harvest and transport. They are easy to identify. They look just like blueberries. So do the bushes they grow on. They freeze well, adding deep colour and loads of flavour if you chuck a small handful of them into a cocktail shaker with ice or whatever drink you’re making, such as a Bilberry Gin Fizz.

They are also used to make many traditional European liqueurs, either by making a syrup and adding an equal part of spirits or by freezing the berries and macerating them in spirits for seven to 10 days. We have found they work well with Irish whiskey.

One of the silliest ingredients we make from the garden is our “stinger syrup”. In addition to loads of garden mint – speaking of invasive and aggressive plants – we add stinging nettles for an earthy and faintly peachy flavour. Add about 200g combined mint and nettle leaves to 500g sugar and 500ml water. Simmer for 10-15 minutes on low heat. Set aside to cool. Strain.

Nettles lose their sting when cooked so don’t worry about wearing gloves to discard the spent leaves. Use as a syrup or make it shelf-stable with an equal measure of vodka. Try replacing crème de menthe with this discovery in The Stinger (three parts cognac, one part crème de menthe, stirred and strained into a chilled cocktail glass).

Once you have mastered the basic structures of syrups and liqueurs, start to look up the flowers around you to confirm they are safe and edible, then head out foraging. Summer might not last forever. But the flavours of the summer blooms are truly infinite.