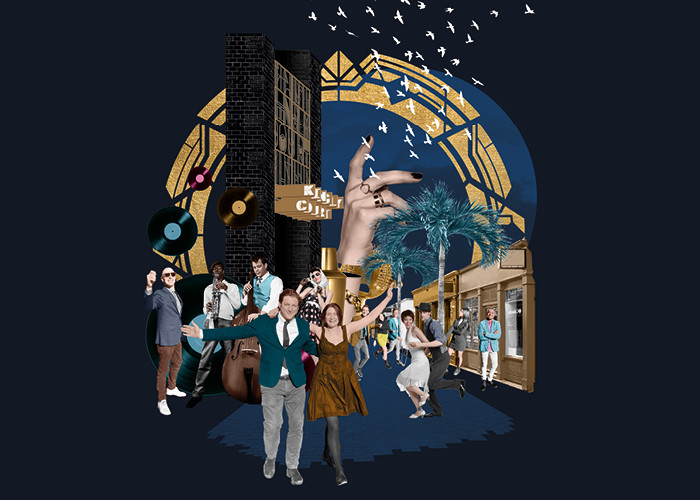 Husband and wife team Edmund Weil and Rosie Stimpson have finally opened a second iteration of their popular bar, and London’s West End will be better for it, reckons Hamish Smith.

When Nightjar opened on City Road in late 2010, it felt like an orchid forcing its way through the pavement cracks. The Old Street area may have spawned the proto-hipster, but back then it was rough around the edges and pretty much everywhere else. Here, down a flight of steps into a dark and intimate basement, was a bar that seem to spark the drinking public’s imaginations.

Marian Beke and Luca Cinalli’s cocktails were of the like we had not seen before. The faraway ingredients you’d never heard of let alone tasted, the outrageous bouquet-like garnishes and the implausible, almost baroque vessels – not cocktails for the classicist, but few weren’t dazzled by the sight. These modernist drinks were juxtaposed by live vintage jazz; Nightjar wasn’t – and isn’t – just a bar, but a show.

And if UK trade appreciation dulled as the decade grew old, the public’s appetite for Nightjar didn’t. The bar coincided not only with the development of mobile phones capable of capturing the artistry of its drinks, but the social media platforms to communicate it too. And while the UK trends were starting to move to more streamlined cocktail thinking, outside of the UK Nightjar’s influence only grew, its style imitated far and wide.

Nightjar’s sequel could have come at any point in the intervening period, but now, 11 years and a handful of months on, its baby (but bigger) sister is here. Nightjar Carnaby in the basement of a Kingly Court site launches in April – and not before time.

“We always had ambitions to extend the Nightjar brand,” says Edmund Weil, co-owner with wife Rosie Stimpson. “But for a long time we were looking in the wrong place. We were looking overseas – we wanted the glamour of an international bar brand.”

Seven straight years in the World’s 50 Best bars – four of them in the top three – is some CV, and offers from hotels and large operators waking up to the prospect of the international destination bar poured in. “You can’t do it overseas without a partner but in having a partner you end up ceding a lot of control,” says Weil. “Nightjar was our first bar and we’ve always retained very close control – it’s what we do and who we are.”

So, why now? Well, Oriole (2015), Swift Soho (2017) and Swift Shoreditch (2020) certainly had something to do with it. But also, sometimes when you’re not looking, opportunities find you. More specifically, the West End landlord Shaftesbury, which had a site that feels like it could have been chiselled out of the earth for Nightjar. A music venue couldn’t hope for four walls with a more pedigreed past.

“It began as a black establishment, Florence Mills Social Parlour, started by an American actress from Harlem,” says Stimpson, the mind behind Nightjar and Oriole’s music programmes. “In the 1940s it was the Blue Lagoon Club. From 1948-50 it was Club Eleven, at the forefront of the bebop jazz movement with Ronnie Scott involved. In the 1950s the Sunset Club, the 1960s the Roaring Twenties and in the 1970s Columbo’s. The Beatles, The Rolling Stones, The Who and Bob Marley all played there.”

With a licence that protected this tradition of live music, Shaftesbury wanted Nightjar. And after 18 months of stop-start negotiations, Nightjar wanted them. “At first, in late 2020, we didn’t think we could do it,” says Weil. “With what was happening with the pandemic, the industry wasn’t on the way up – we, like many hospitality businesses, were in the foetal position. But in May-June last year, they came back with an offer that made it viable. After that, there wasn’t a second question.”

The original Nightjar needed young people willing to take a risk, to adopt a style that had never been seen before – that was Old Street in 2010. 11 years on, with the brand polished and matured, Nightjar feels ready for the West End as much as the West End is ready for Nightjar.

“Here, with Carnaby Street, Oxford Circus, Liberty’s around the corner, it’s a mecca for tourists,” says Stimpson. “There are also people from west London who would never go to east London, but would come here.” Weil agrees: “People gravitate here from all over. People who appreciate grown-up places to drink in, places to listen to music and get up and dance. And Shaftesbury is trying to grow the late-night experience in the area. Saying that, there’s an element of ‘build it and they will come’.”

Talk us through the site: “The brief was Nightjar but not what we built 11 years ago. It has to use the design language of Art Deco and be more beautiful,” says Stimpson. Like Oriole, the site has the potential for an impactful entrance. Descending a wide staircase which frames the bar, guests will be delivered into a large room of small tables that face the stage. It’s big, but this is table service, so 85 covers – and yes, some stools at the bar.

“We also have booths and cosy corners, but it’s a much more open space than the original Nightjar,” says Stimpson. “The mirrors are Lalique-style and there are pink mirrored tables. The stage is front and centre – it is a music venue.”

So is this Nightjar, but on Oriole budget? “We spent far too much on Oriole,” says Weil. “But yes, we want it to be more polished and feed off the glamour of the West End, with an intimate feel and dark, soft lighting.”

The plan at Nightjar Carnaby is for the live music not to be a feature, but a fixture. “Our bars are always at their best with music, so we want to expand it beyond the core busy hours of 8.30-11pm to have early and late music as well,” says Weil. “We have a 3am licence and the landlord wants us to operate the whole time. If there’s music all the time it’ll hopefully be busy all the time. We like the idea of capturing the local theatre crowd,” he says. “There aren’t many joints that have music late into the night,” adds Stimpson.

At its core, the music will stay true to the Nightjar jazz soundtrack, but will reach into the 1960s and 1970s as well. Following the menu, which continues the theme of pre-Prohibition, Prohibition and post-war, the music will be in keeping. “It’ll be 20s to early 70s, with funk and soul on Fridays and Saturdays. We’re thinking of having late-night piano sessions too.”

Nightjar's Aztec, Lupita and Name of the Samurai

Trends may have changed since 2010 but Nightjar’s cocktails are here to stay. “People love the fabulousness,” says Stimpson. “We’re not going to put a specialist Negroni list on our menu – we do what we do.”

Indeed, much of the menu will mirror the Old Street site, with the Signatures section the point of separation. “That is where the teams will be able to show off and do their own thing,” says Weil. “As time goes by there’ll be more diversification, but to start we need to concentrate on the drinks being what people expect when they come to Nightjar.”

If it’s not broken, don’t fix it, but do make some minor adjustments. The unwieldy ingredients list – famed at its peak with a dozen wondrously exotic ingredients per drink – has long gone. “Interesting, unusual and unexpected is what we do, but we don’t do it for the sake of it,” says Weil. The menus are now down to 24 cocktails. “In a complete reversal, Edmund pushes for more drinks and the bar team says no,” says Stimpson. “They’re thinking in a more business-like way.”

When any bar group grows, it is an opportunity to advance careers of those already in the business. “We’re moving two of our senior people over to helm Nightjar Carnaby,” says Weil. “Sebastiano Cristofanon will manage it and we’ll be doing a lot of hiring too.”

It says something of the enduring appeal of Nightjar that even in a staffing crisis, they’ve had no shortage of applicants. “It appears Nightjar is still an aspirational place to work,” says Weil. Indeed, it feels like Nightjar’s long-awaited second album holds appeal on both sides of the bar.