Will April be a financial cliff edge for hospitality?
by Hamish Smith / 14 March, 2022 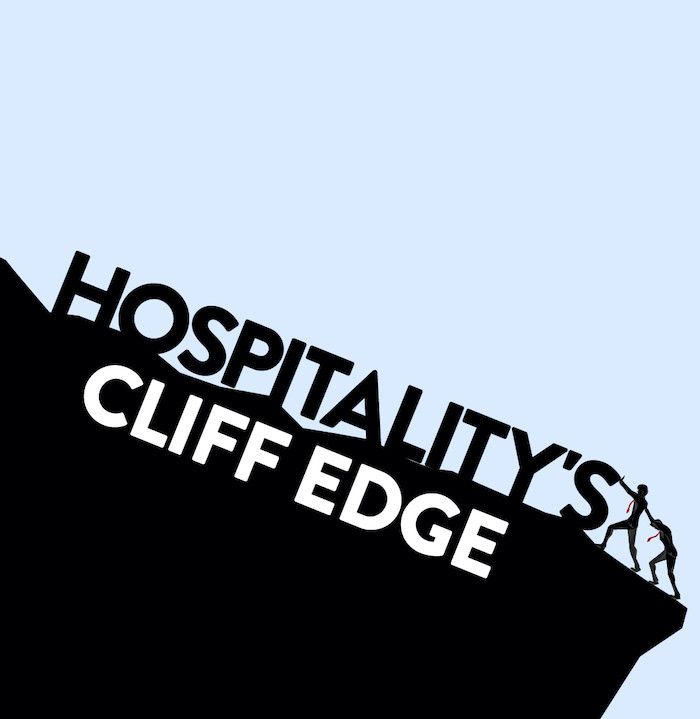 The financial safety nets put in place to mitigate restrictions are being removed, and new costs are adding further pressure. But there are some positives, says Hamish Smith

For all the financial blows wrought by the pandemic, hospitality is about to find out what living with Covid really means – this April sees the end of the majority of pandemic-era government support.

That means a return to 20% VAT for food and non-alcoholic beverages, changes to business rate relief and an end to the lease forfeiture moratorium. It couldn’t come at a worse time. Against mounting cost pressures, including goods, energy (which has more than doubled in just a few years) and wages, and a staffing shortage that has restricted opening hours, it’s no wonder next month is being described as a cliff edge for hospitality.

The end of the lease forfeiture moratorium – introduced to give tenants breathing space from repossession over rent arrears – ends on March 25, having been extended in June last year. Landlords and tenants that haven’t come to an agreement on debt will part ways. “Landlords will be able to knock on your door for the first time in two years,” says The Breakfast Group’s Eric Yu. “In April and May there will be blood on the streets.”

Those that have survived this far now face a less-forgiving cost climate. As the fiscal year ends, business rates which were reduced by 66% for 2021/2022 will now see a reduced discount of 50%, up to a maximum of £110,000 for 2022/2022. Still a substantial cut and welcomed by the majority of the trade alongside the introduction of a new three-year revaluation cycle from next year, it remains an added cost.

Undoubtedly an aspiration for the industry, wages are increasing. For those that pay the national living wage, April sees a 6.6% increase to £9.50 per hour, which for every full-time worker is around £1,000 more. Add to that increases to national insurance contributions of 1.25% and you have a number of small but compounding costs.

For food-led hospitality, the reinstated 20% VAT on food and non-alcoholic beverages will cause the most damage. The VAT, which was reduced to 12.5% last year and was at 5% the year before, has less of an effect on wet-led businesses, but as the two models merge with bars serving more food and zero-abv drinks, it will be felt. A slightly grey area, but canny accountants might have argued that cocktails and mixed drinks had VAT-exempt elements too. And besides, for those bars that exist as part of restaurants, what was good for the food part, was good for the whole.

Though the increase will have to be passed on to the consumer, this will put pressure on the cost of hospitality experiences and further fuel inflation. How much the consumer – facing an increase in the cost of living – is willing to accept is a question that may have to be asked, no matter the answer.

There is a sense the government feels it has done enough and in furlough, grants, VAT cuts and ongoing business rates discounts there have been considerable concessions over the past two years. The question is whether hospitality businesses are battle-hardened enough, or merely hanging on. In research by Peckwater Brands, 43% of UK hospitality businesses polled said they do not believe their business will exist in five years’ time.

But much of the sector’s ability to negate these drag factors is down to their ability to grow.  The chronic staff shortage, caused by the tandem ills of Brexit and the pandemic, is perhaps the most important challenge. Vacancy levels are double (102%) what they were pre-pandemic, according to ONS labour market statistics, while UK Hospitality figures put vacancies at 400,000, suggesting the industry is missing more than 20% of its workforce. “There has been a fundamental shift in the labour market and hospitality must address that quickly,” says UK Hospitality chief executive Kate Nicholls, who is backing a new £5m drive to recruit new workers – Hospitality Rising – and urging government to promote more job-market appropriate training.

Hospitality Rising, launched by former Pret A Manger marketer Mark McCulloch, is encouraging employers across the industry to invest in the campaign by pledging £10 per employee. With cross-body support, it is aiming to be the industry’s biggest ever recruitment drive.  “This will allow us to drive our message out to the UK public and make hospitality a positive career choice for the very many, not the few,” says McCulloch.

The living-with-Covid phase, accented by the end of Plan B measures in January, has also had a positive impact on customer levels. The lifting of the work-from-home guidance is a particular boon for city centre businesses and the loosening of travel restrictions is already seeing tourism return to urban areas. The cliff edge is coming, but for the many that survive, beyond it is the return to something like a consumer landscape unseen for two years.