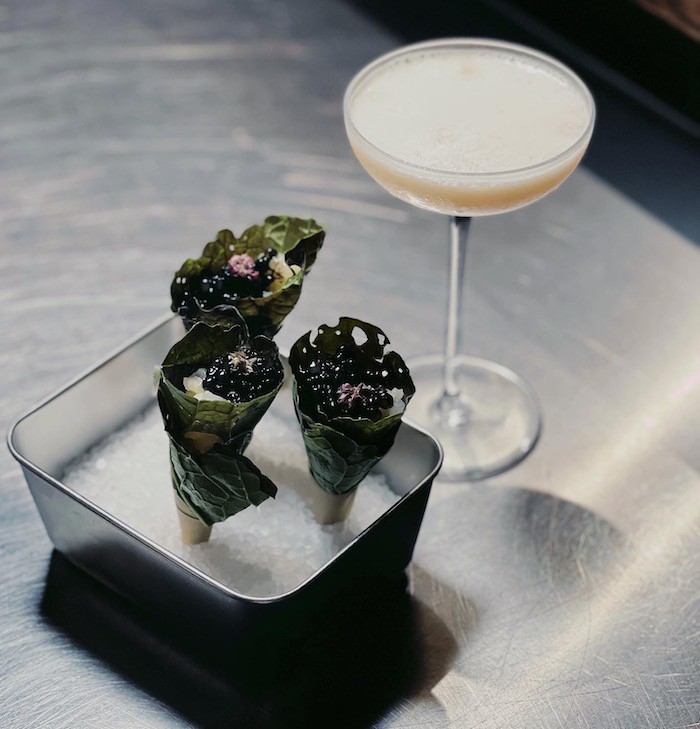 When they are done for the right reasons, partnerships with different businesses can offer all manner of positives, says Monica Berg, whose recent food/cocktail pairing collaboration proved the rule.

Good collaboration can lead to a fresh take on an idea, or take you out of your comfort zone to create something genuinely exciting and new. It can give you a chance to bring a honed perspective to another industry or provide access to materials and means of production you otherwise wouldn’t have. Even better, it gives both sides an opportunity to learn from each other, and often also places you in front of an audience who might not have discovered you otherwise.

A bad collab, on the other hand, is often just a marketing exercise, something done purely for profit – and unfortunately not only a waste of time and energy, but something that can potentially create a lot of damage.

When we choose who to collab with, it’s important to us there’s already a personal relationship to build on that there is mutual respect and a desire to work together. A good example of this is when you collaborate with chefs. I love working with food and chefs, but often in the past I’ve had to work with chefs who clearly do not want to collab – they just want to cash in the pay check – and this will always be visible in the end result. Of course, there are always exceptions: I actually met one of my closest friends through a collab I did a few years back in Norway and, although we had never met before that event, I knew by the end of it that this was a person I wanted in my life.

Collabs are such a great source of information and knowledge, and despite being really hard work, they leave me feeling energised and inspired because I get to see my ‘world’ through someone else’s eyes. More than once this has led me to completely re-evaluate what I do and helped me evolve and grow.

For London Cocktail Week [Month] this year, we wanted to bring back the Kitchen Counter in Tayer – but we wanted to challenge ourselves by bringing in chefs who offer completely different flavour profiles and styles of cooking. Partly because, after the year we’ve had, we desperately needed the creative challenge, but also because we knew our guests would love and appreciate it as much as us. In hindsight, it was quite ambitious to do four guest chefs in four weeks – but in the end, we smashed it, and learned so much along the way.

Each week we went into it knowing only in theory what the dishes would be, and come Wednesday when the chefs started prepping in the kitchen, we would essentially have 24 hours to create, tweak and pair our drinks with the visiting chef’s dishes.

At 3pm on Thursday, we would do a final run-through of the full menu – tasting both dishes and drinks  – and make the necessary adjustments for them to pair with each other.

It’s quite a lot of pressure working like this, but simultaneously, this is where the magic happens; having an open dialogue between bartender and chef, bar and kitchen – where the only language being spoken is flavour. The only thing that matters is to nail the pairing, and being okay with that meaning sometimes you change the drink ever so slightly, while other times you tweak the dish. Occasionally, you have to scrap a drink altogether and start again, while other times you nail it on the first go – you just never know.

I completely understand those who question why we put so much effort into so few seats – the kitchen counter seats only four people per sitting and there are two sittings a night – but sometimes it’s important to be selfish and do things for yourself. The creative currency we have gained, the flavours we have discovered and the friendships that have grown stronger over the past four weeks make it worth it, and, more importantly, the fun we had made it more than worth it!