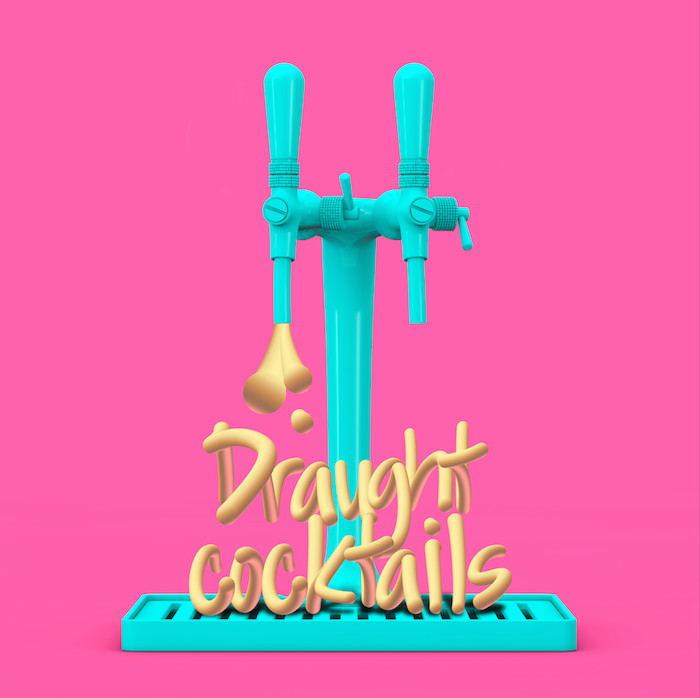 Draught cocktails are a great way to maximise speed and spend per head, says Sian Buchan, co- owner of Uno Mas in Edinburgh.

Back in the good old days of January 2020, before we knew what was going to hit us in March, we were getting ready to open Uno Mas. We had lots of meetings with local brand reps about our concept and ideas and how the bar was going to work. Our idea was a late-night, high-volume bar serving a range of products with the backdrop of amazing music. (Little did we know we’d have 18 months of closure, curfews and music bans.)

Key to that was to ensure high- quality, consistent cocktails – no matter if you ordered one at 5pm or 2.30am, we wanted it to be delicious. To do this, we spoke a lot about batching and keeping cocktails quite simple in serve but delicious in flavour so that all the prep is done before opening.

William Grant & Sons had a Monkey Shoulder carbonation system it was willing to give us. Of course, getting a system from a brand comes with ties and agreements, but it’s grand when we get to work with great products – we have two Monkey Shoulder lines, one for Reyka and one for Hendrick’s. We’d never worked with a system like this before but, luckily, my husband Jody and his business partner Sam Baxendale had one in their bar down the road (RIP Kin). Jody is also the Monkey Shoulder brand ambassador so was more than happy to help.

So how do you go about working out what to use a draught system for? Myself and bar manager Kat Stanley-Whyte had started off with the main flavour profiles we wanted to work with – we knew we just wanted four, fairly easygoing Highballs. We worked first with a Soda Stream so that we could try recipes on a smaller scale. While we were doing this, we played around with flavours and ideas. We knew that carbonation meant we needed a bit more sweetness in the drinks, but we weren’t sure how much other flavours would be affected. We discovered that certain flavours were dulled by the carbonation, while others really came to the forefront.

Campari in particular was one that seemed to be more prominent when carbonated than not, so we had to change our Hendrick’s Negroni twist ratios a lot. After having the cocktails on the actual draught system and using Supasawa as our citrus replacement, we also realised that, after a few days, flavour starts to come through a bit more than on day one or two, so we changed the ratios again. We also just have to stay on top of prep, as the kegs take hours to fully carbonate in our cellar, so it’s a constant watching of levels.

We priced our draught cocktails slightly lower than other cocktails as we can serve them so quickly and we figured it may drive people to those cocktails. Our concept is being simple, quick but easy, so to that end, we also don’t over-garnish, unless it brings something to the drink. For example, one of our drinks is Monkey Shoulder & Coconut, which we serve with a sprig of toasted rosemary; the aromas of the savoury herb work really well with the sweetness of the drink; simple but effective.

When we first opened in February 2020, we were expecting some people to be almost disappointed with getting a cocktail from a draught system rather than watching the cocktail being shaken, stirred or thrown. However, the people who ordered them seemed genuinely impressed by the speed and taste. We put them in their own section of the cocktail menu, which may have helped manage expectations in the days of people coming to the bar.

However, in this day and age of table service, draught cocktails are amazing; the ability to quickly serve drinks, especially when people are only on tables for two hours (as are the rules at time of writing in Level 2 in Scotland), is incredibly important. Each table ordering one more round of drinks in their two-hour period can make a huge difference to the bottom line – which at the moment is more important than ever. It’s been a tough 16 months for us, but draught cocktails have been a big part of the reason we are still here.