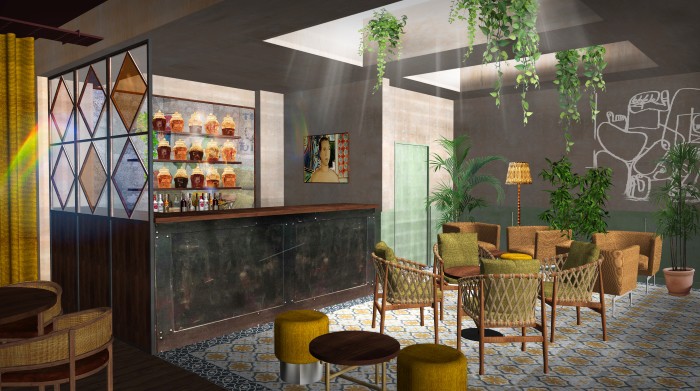 Hospitality group, MJMK has announced the upcoming launch of Bar La Rampa, a central London venue designed to celebrate the heritage and culture of 1950’s Havana.

The new bar will have a food offering of Cuba- and Central America-inspired small plates developed by Ana Gonçalves and Zijun Meng of TĀTĀ Eatery, and a drinks offering created by bartender, Marcis Dzelzainis, previously of Sager + Wilde, 69 Colebrooke Row and Dandelyan.

Named after Havana’s iconic Calle 23, La Rampa aims to celebrate Cuba’s traditions of food, rum, and live music, with a drinks list emphasising the versatility of rum, a house band and regularly hosted Cuban nights throughout the week.

Located nearby Oxford Circus on Market Place, La Rampa has been designed by London based designer Alessio Nardi’s A-nrd Studio and will accommodate indoor and outdoor dining.

“I lived in Cuba until I was six years old, and my father spent the majority of his life in Havana, meaning I travelled there often throughout my life,” said Jake Kasumov, co-founder of MJMK.

“I’ve always been enamoured with Cuba’s cultural heritage, but find it has often been misrepresented through cultural appropriation abroad. Marco and I are passionate about bringing Havana’s beautiful history to life in a way that celebrates the country’s authentic food, drinks and design.”

Jake, along with co-founder Marco Mendes, also own and operate Casa do Frango - a nod to Marco’s Portuguese heritage - as well as KOL Restaurant & Mezcaleria, Bar Bolivar, and Vinegar Yard. La Rampa will open in summer 2021.