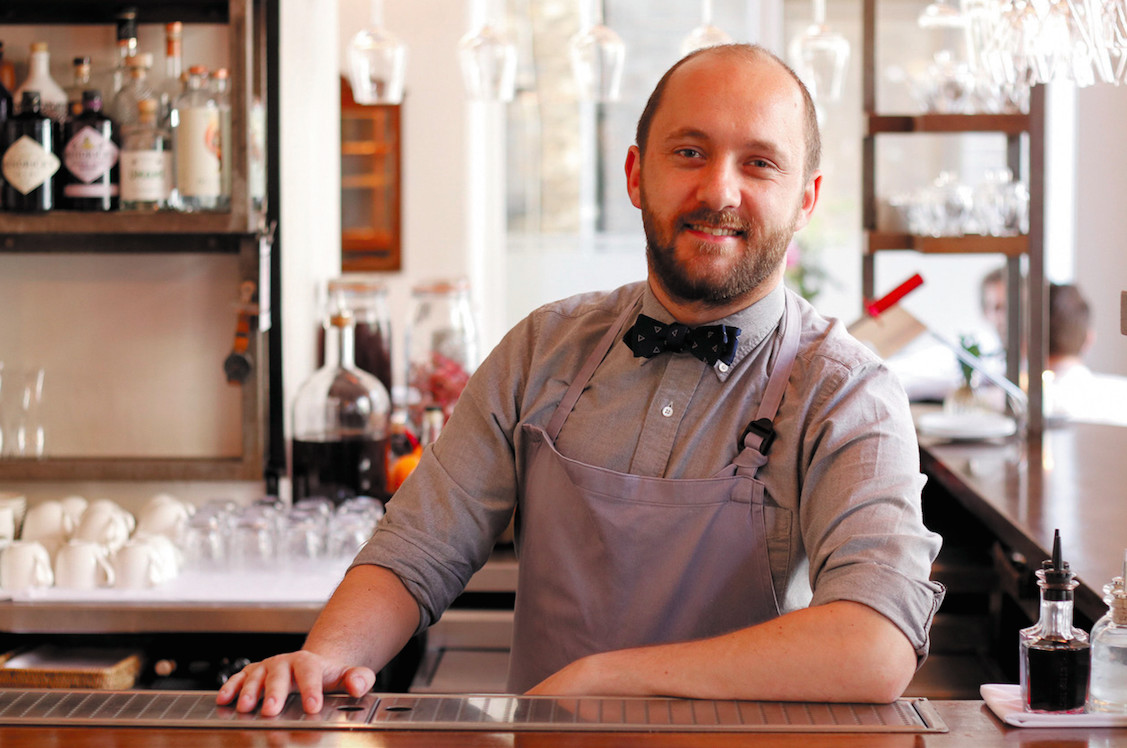 The Clove Club’s Rob Simpson works alongside some of the best chefs in the world. He reveals the workings of a bartender at a fine-dining restaurant bar.

We have come a long way since we opened. In the five years I’ve been at the Clove Club it’s developed from a cool east London spot into a globally recognised dining destination with a Michelin star, and was recently named 27th in the world by The World’s 50 Best Restaurants.

The bar team’s role has developed dramatically, from something quite traditional in our early days to what we do now. We started with a simple list of classics and twists but now have a list of signature serves influenced by seasonal produce and kitchen techniques. As the restaurant has grown in reputation the demand for our tasting menu has increased. Instead of bar food, we serve the tasting menu at the bar. We also have one of the most comprehensive alcohol-free offerings you’ll find in any restaurant (or bar in the world), alongside a considered tea and coffee programme.

We have developed these ideas gradually and, with each addition, we’ve had to reduce the preparation time of everything else. Bartenders at Clove Club work similar hours to the kitchen team, starting at 9am to prepare for lunch, then through into dinner service. We open at midday for lunch so we have a lot to do in three hours: our alcohol-free pairing needs to be batched fresh each day, we mise en place our cocktail list and get the bar clean and set for service – it’s a lot to pack into a few hours. We’ve had to become masters of multitasking and planning but, thankfully, we have a team of chefs who put out close to 1,000 food items each dinner service. So, it’s the chefs who we look to for guidance on how to deliver many things in a short time.

Take our alcohol-free pairing. One is an assortment of juices, shrubs, infusions and the odd amazing alcohol-free product (like Kosmic Stout from Nirvana Brewing) and the other is a selection of teas, all brewed at different temperatures for different times. This alone requires several hours each week to produce, plus any changes we make due to an ever-changing menu (actually menus plural – we have standard, vegetarian and vegan every day). But lessons learned from the kitchen have seen us through, with labour-intensive ingredients (like smoked lemon juice & beetroot molasses) produced en masse and portioned up for storage and daily batching.

When it comes to our cocktail list we have a wealth of rare, seldom-used ingredients to choose from thanks to the multitude of suppliers the kitchen uses – with a constant eye on peak British produce. We are privileged to work directly with some amazing growers (Organiclea & Flourish Produce) who are cultivating seeds we have selected. Each year Organiclea grows cucamelons for our house Martini garnish, which we preserve to see us through the year.

With a wealth of produce and a treasure trove of knowledge in the building there is always an urge to create, but time is always against us. With a mountain of preparation each day we find ourselves with only a small amount of ‘free time’ to develop. This is a problem also faced by the kitchen but, like them, we keep ideas in hand, ready to be developed when there’s a lull in the workload.

Having a constant dialogue between teams has helped us all become better – meeting with the sommelier to discuss ideas for the pairings; speaking with chef about new dishes. Effective communication and sharing of ideas pushes each other forward. I often ask chefs why they prep something a certain way, what the process is, and speak to sommeliers about tasting notes and flavour profiles. Bartenders don’t do anything new without first speaking to the senior chefs and sommeliers to see if they’ve touched on the idea before. Chefs and sommeliers have a different mindset to bartenders. We’re all trained in different ways to do different things but we’re here for the same purpose – to convey flavour and produce and ensure our guests enjoy themselves.

Our service reflects this. We aim to be genial and friendly while being precise and exacting in all that we do. Our guests probably will not notice that we are serving, bartending, barbacking all at once, but they we feel the energy in the room. Our job is to make them feel comfortable, serve them to the utmost and ensure that they leave having had a world-class dining experience.