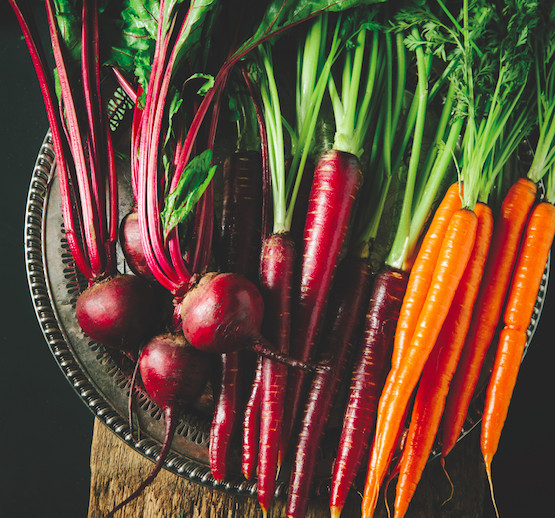 We love the holidays. All the cooking, baking, mixing, and shaking to share the bounty of a great growing year with close family and friends is what makes year-end festivities ring in joy and happiness. Okay, so this year has been a bit of a wobble. Hey, we’ve all had time to reacquaint ourselves with gardening and with simple pleasures at home. And those skills will come in handy for crafting gifts, creating a sumptuous festive table or more, for giving thanks for the great moments 2020 had to offer (perhaps fewer than other years, but there were a few).

Winter veg is a new source of inspiration on our drinks front, along with more traditional bounties such as sloes from the hedgerows and apples from the orchard. We had a bumper crop of beetroot this year. So, besides making a batch of beetroot borscht for the freezer, we whipped up some beetroot wine. It was surprisingly good, unlike our repeated attempts at sloe wine.

A kilo of peeled and grated beetroot goes into a large pot with 2.5 litres of water. Bring to a boil, then lower the heat and simmer for 15 minutes. Take the pot off the hob and let the mixture cool. Strain the mixture through a jelly bag into a clean pot. Discard the grated beetroot. Add 1 kilo of sugar to the liquid and stir until dissolved. Mix a teaspoon of dry baking yeast and a teaspoon of sugar into 125ml of tepid water in a small jug. Let it bubble and froth while you juice four limes and add the liquid to the yeast mixture. Stir and then add to the beetroot liquid. Pour the mixture into a glass demijohn. Cover the top with a cheese cloth and leave it for two days. Then seal it with an airlock and leave it untouched for about 14 days. Filter the finished wine through a jelly bag, bottle, and enjoy.

You can follow a similar winemaking method to make a spiced carrot wine, using lemon juice instead of lime and adding five whole cloves and a small handful of sultanas to the fermenting liquid. The same holds true for parsnip wine, swapping a cinnamon stick for the cloves. (The latter left us more than gobsmacked when a friendly old gent handed us a sample – it’s surprisingly good.)

Now let’s talk about some non- traditional ways to serve a very traditional holiday sip. A jump back in English history provides so many inspirations. This year, one that stands out is the combination of spirit and red wine – both hot and cold.

One of Queen Victoria’s favourite drinks was equal parts whisky and claret. The Smoking Bishop, the Cardinal and a host of other wine and spirit punches fill our recipe archives. Today, spirits and wine still get combined, but mostly in the narrow parameters of classic cocktails such as the Martini and the Negroni where fortified wine (vermouth) come into play. Sparkling is common as well. But port? Red wines?

One of the best holiday drinks we’ve made in ages came to us on an evening out in Berlin after observing the wines the restaurant owner, who professed not to care for cocktails, selected for us. We stirred down equal parts St Emilion and sloe gin (50ml each) with 5ml simple syrup and strained it into a chilled coupe. We garnished it with an orange twist that time, though since then we’ve enjoyed the drink even more with a flamed orange twist. That night it worked: we love this new cocktail. And it has never failed us since. It even sings with a dash of Angostura bitters. Like those old classics, this one can also be served hot – we’ve microwaved it for a minute in an Irish coffee glass. Nuking it doesn’t fill the room with holiday aromas, but there’s a way to do that without burning off alcohol. A pan of cloudy apple juice with a packet of mulling spices simmering away uncovered on a back burner will bring the holidays to everyone’s olfactory senses.

If you haven’t made your own, this year you ought to be able to find some bargains on sloe gin as the major off-trade outlets suddenly deemed sloe out of fashion.

In addition to quince and medlar liqueurs, infused aquavit is on our holiday menu. We had a huge caraway harvest this year, as well as reasonable crops of coriander seed, fennel seed and angelica seed. You can make a single note aquavit with caraway, but it’s fun to add a few other modifiers, such as star anise. The infusion takes anywhere between one and two weeks, depending on the desired strength. To a bottle of vodka add a tablespoon of caraway seeds, half as much fennel and angelica, a single star anise. Add a lemon twist and a sprig of fresh dill one day before you end your infusion – you don’t want them in for the duration. After that, serve this wonderful mixture neat from the freezer or stirred down as a Martini.