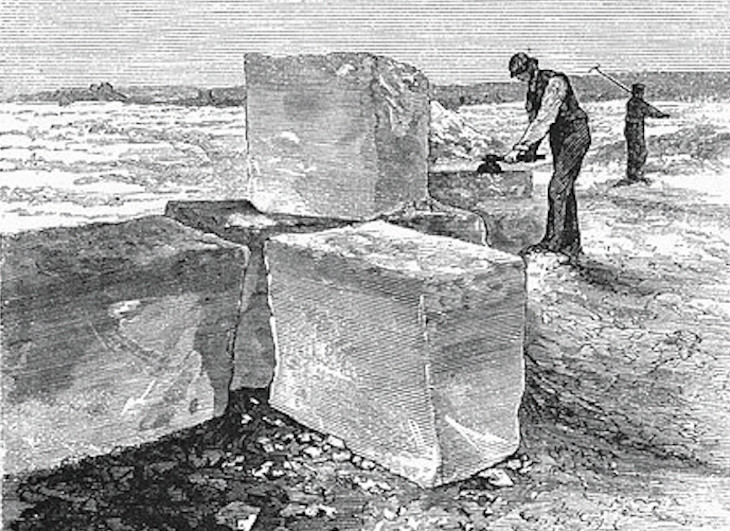 The use of ice in drinks has a long but not always illustrious history. Charles MacLean takes a trip through the archives to find out how commercial ice got where it is today.

In June this year, the BBC’s Watchdog programme discovered that seven out of 10 samples of iced coffee from Costa were contaminated with bacteria found in faeces, three in 10 from Starbucks and Café Nero. Next month, it was widely reported that “poo bacteria” had been discovered in KFC, McDonalds and Burger King iced drinks”.

These are extreme examples, but they are salutary. More common in domestic or bar-trade ice is taint picked up during refrigeration – ice absorbs odours as a sponge drinks up water. The frost that forms in a freezer is condensed moisture from any food stored there, laden with odours which will be passed to the ice, and thence to the drinks. Homemade ice from mains water may also be tainted with chlorine.

In addition to purity, there is the question of the temperature to which the ice has been frozen. Ice cools drinks by absorbing heat and heat absorption is in direct proportion to a) the surface area of the ice and b) its temperature. Thus, cube ice will absorb heat and melt quicker than cracked or crushed ice, and freezing to a lower temperature will delay this, whether you shake or stir. If your ice is at, say, -10°, it should (at least theoretically) reduce the temperature of the drink to -10° before it begins to melt. Also, stirred or shaken, whole cubes or cracked, the more ice, the less dilution.

Prior to the emergence of the commercial ice trade in the 19th century, blocks of ice were cut with saws and axes from lakes and glaciers during the winter and stored in ice houses. From at least the 16th century, wealthy Europeans built these largely subterranean structures to preserve food and make ice cream – chilled drinks were not popular in Europe – but the practice was for domestic use only and not widespread.

Commercial trading in ice began in 1806, pioneered by Frederic Tudor, a New England entrepreneur. His first cargo, cut from ponds on his father’s farm near Boston and packed in sawdust, went to Martinique. Soon he was shipping to other Caribbean islands and to four cities in the Southern States. In 1833 he dispatched his first cargo to India, which soon became his most profitable market. By this time he was known as the Ice King.

The first cargo of American ice to be shipped to London arrived in 1842, supplied by the Gage Hittinger Co of Boston. Mr Hittinger went ahead on a steamer to prepare the way, confident that it would be enthusiastically received.

But this was not to be, in spite of him hiring “a magnificent hall or saloon” for the launch, advertising in The Times and training up a squad of ‘barkeepers.’

“At a given signal the well-trained waiters appeared, laden with the different drinks. The effect was gorgeous, and I expected an ovation that no Yankee had ever had. But, alas! The first sounds that broke the silence were: ‘I say, waitaw, a little ’ot wataw, if you please; I prefer it ’alf ’n ’alf.’ I made a dead rush for the door, next day settled my bills in London, took the train for Liverpool and the steamer for Boston, and counted up a clear loss of $1,200.”

Two years later greater success attended the arrival of ice from Wenham Lake, near Boston, already famous in the States for its purity and clarity. The Wenham Lake Ice Company opened a depot on The Strand and exhibited a block of their famous product in its shop window, so clear that a newspaper could be read through the ice, 2ft thick. Its purity was remarkable, as was its ability to withstand temperature changes that would have reduced other ices to mush. The company’s promotional campaign also condemned British ice as polluted and unhealthy.

Next year, the Illustrated London News was reporting: “The peculiar and ascertained purity of the ice used in America fits it for table-use; and it is accordingly the constant custom there, to mix it with water or milk, for drinking; to dilute it with wines or spirits, and to place it upon the table, in direct contact with butter and jellies. Some of our hotels and taverns are beginning to use this ice for the manufacture of Mint-juleps, Sherry-coblers [sic], and other American beverages of celebrity; and we should not be surprised, if these tempting drinks, as well as the ice itself, were to come into very general use.”

Wenham Ice became the Evian water of the day among the fashionable set. Even Queen Victoria was enthusiastic – one account claims the company received a Royal Warrant – and during the 1860s, when the closer Norway became Britain’s principal source of ice, the Norwegians changed the name of Lake Oppegaard near Oslo to Lake Wenham to give their brand some cachet.

Mechanised freezing eventually undermined the market for lake ice, though a belief that ‘natural’ ice lasted longer lingered into the 20th century, and the market didn’t disappear altogether until after WWI. Apparently, the boom in ice imports in the late 19th century was seen in Britain as evidence of climate change (although temperatures were not, in fact, rising in the long term).