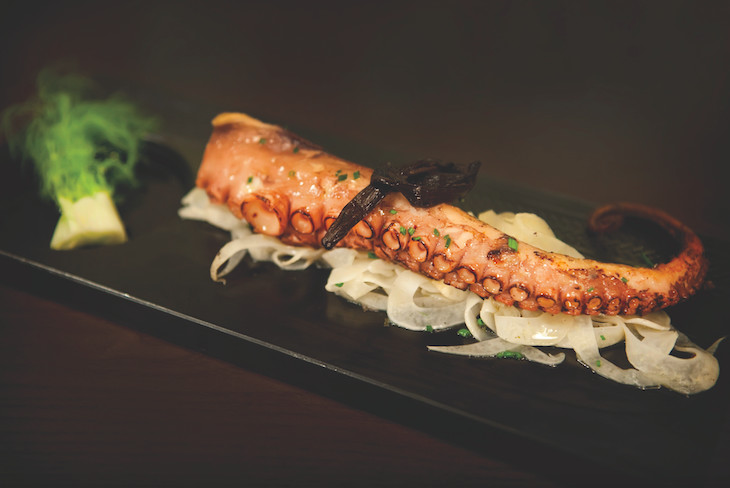 Kitchens tend not to be a major focus of most cocktail bars, but while some literally put food on the back burner, others are blazing a trail in innovative dishes from some spectacularly unlikely cooking areas. Hamish Smith takes a bite of the best

Not so long ago the British were the food philistines of Europe – “the baked bean nation”, our continental cousins would whisper, loudly.

Gastronomic repression was then, but it is not now. In the past 20 years there has been a slow reordering of our oral priorities, a gentrification of our palates. But not so much in the bar. It offers no pleasure to say that food is the weakness of the UK bar industry.

Here, like no other country in the world, there still exists a sort of binary nightlife culture – bars for good drinking and restaurants for good eating. Rarely the twain shall meet. Indeed, in the wee-hour world, bar snacks hang on to life with an intransigence that belies their brittle being. For many bars, particularly those that make cocktails, food remains an afterthought. But it needn’t be.

There are historical reasons that have sculpted this cultural oddity – not least that the British have a rich pedigree of single-minded drinking. In few other lands are people so adept at divorcing themselves from their evening appetites for so long. But UK bars lead the world in so many other areas. Drink creation has become an art, a science and an obsession.

Service has been dragged out of the slums of human behaviour to represent best practice around the world. But just ask yourself this: would we have seen the meteoric rise of the restaurant bar if all was rosy in the bar garden? Restaurateurs have taken what the cocktail bar does well and run with it, offering a one-stop-shop, upstairs-downstairs evening out. Never underestimate human laziness – for some, legs are better left to the tables and über is more effort than shuffling upstairs. Meanwhile, at the pub end of the business, could it be an omen that food ended up being the saviour?

You might think the bar – particularly the cocktail bar, as a specialist - is different. But, whether we like it or not, that awfully continental practice of eating and drinking in unison is creeping into our culture. Look at New York, or indeed most centres of nightlife around the world. There they have chefs working in most bar kitchens – they take their solids as seriously as their liquids. “It's something I'd love to see more of in the UK,” says Ryan Chetiyawardana of White Lyan. “When you go to New York you can have proper food alongside world-class cocktails. Dead Rabbit, Nomad, Saxon + Parole and Bar Goto are shiny examples. It's something we've struggled with here.”

Bar snacks might scratch an itch in the early hours of the evening, but they can end up being the foreplay to the main event. Which, unless your bar can muster something meaningful, inevitably happens somewhere else. The food opportunity runs through service, but dinner time is currently the restaurant’s domain and it’s up to bars to take their piece of the action.

A cocktail bar shouldn’t try to be a restaurant – it won’t win. But it can offer a drinker enough gastronomical intrigue to augment and prolong the experience. Just imagine what your accountant would say if your average customer stayed for an hour longer. Food may not have great margins but even with small profits or as a loss-leader it adds value. It doesn’t need to pull in the punters, just distract them from leaving. So that’s the pitch. Now the challenges. Even if you could afford one, it’s hard to attract a good chef to a bar. Likely you don’t have a kitchen because you don’t have the space or the budget for the equipment.

Elliot Ball of Cocktail Trading Company takes up the point: “Having a food offering in a small bar takes up valuable space that could go to seating or improving your back of house/toilets,” he says. “In London, there are many licences going which actually require a food offering (A3), and bar businesses that would never normally offer food now have to in certain sites. The sheer amount of compliance work when putting a food offering together can baffle a lot of operators with a solely bar background, and the environmental health officer really can become the most feared guy on the streets.”

Ali Burgess, owner of Happiness Forgets, says food in a small basement bar is particularly difficult. Cost of resource, space and ventilation make for a triumvirate of reasons for him to be pleased with his no-food-necessary A4 licence. But he sees that expectations are changing. “Cocktail bars do need some element of food,” he says. “I’m going to try to incorporate food into all my bars.” A bold promise, given the obstacles, but Burgess has recently taken over the restaurant upstairs. Handy.

It might be that your bartenders aren’t interested in preparing food – they are bartenders, trained to black-belt in drinks, white-belt in bruschetta. Luke Loddo of Plotting Parlour in Brighton doesn’t see the sense in bartenders playing chefs. “That's not where my skill set and experience lies and I wouldn't want to offer sub-par food that would affect the reputation of the venue we've worked so hard to achieve.” It’s a fair point. But if you don’t have the skills, likely someone not too far from the business does. It could be that the delicatessen, café or restaurant around the corner could provide the answer.

They did for Danny Murphy of Liverpool’s Berry & Rye. “Our bread is from a local independent baker that we visit for breakfast. Our cheese comes from a cheesemonger who always stops at Berry for a nightcap after doing his rounds in the city centre, and our cake is from a lady who single-handedly put us on the social media map simply because she loves us.” 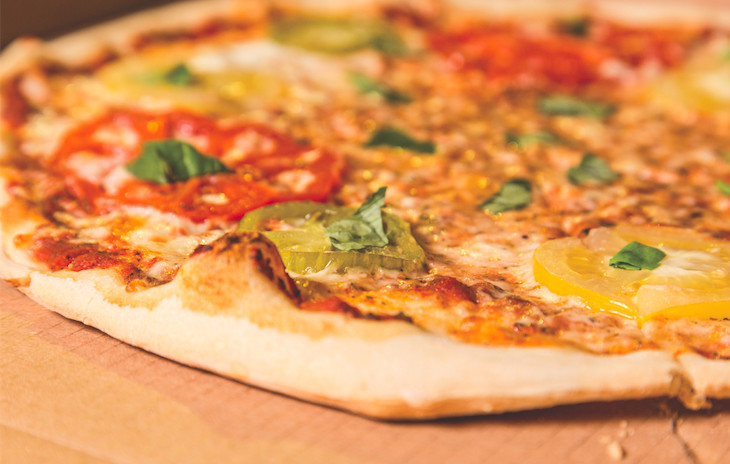 Sager & Wilde in London is perhaps the exemplar of well-sourced ingredients in a continental platters- of-plenitude sort of way, but serving wine isn’t quite as occupying as making cocktails. Cocktail bar Joyeux Bordel in London decided on a similar answer but, importantly, approached food with a question. “We asked ourselves: what do people want to eat at 6pm or 7pm and at 1am or 2am that is easy to keep and always good? We focus mainly on products with almost no preparation (we have a washing area that doubles as a kitchen), as we have no chef – the bar-back or the bartender prepares the food. We went with a selection of cheese, some charcuterie and a burrata. What was essential was to work with very good products and with local people. We also run partnerships with various chefs throughout
the year.”

Bar Termini is another continentally-styled venue that has gone down the quality smorgasbord route. It offers Italian cheeses, two types of salami, coppa, beef carpaccio, prosciutto and even mini panini and sandwiches. Where all this happens is anyone’s guess – likely there is no smaller bar in the UK than Termini.

Meanwhile at Loves Company in London they went native and brought back the toastie. This may not be haute-cuisine but, like the bum-bag, it’s back. Ensconced in hipster HQ, Shoreditch, Loves Company’s high-end toasties crucially fit the style of the bar – informal but quality. Important to some customers is that the food is hot, which normally requires some sort of extraction, but a toastie machine does not. Play That Fungi Music is Double Gloucester, mushroom and garlic, while Mama Mia is Parma ham, mozzarella, pesto and tomato. They’ve done well and now bars such as Cocktail Trading Company, at its new branch off Brick Lane, have followed suit.

If you have the room and budget for an extractor fan, the options multiply. At Crazy Pedro’s in Manchester, Lyndon Higginson reckons proper bar food is the future. “I'd say most people these days will need to tackle the problems of squeezing in a kitchen as it's much easier going for A3 usage over A4. With Pedro's we decided to go for pizza as you don't need crazy expensive and overly large extractors as you'd need if you were making anything grease-heavy, like burgers. We started with one pizza oven but as the food became successful we eventually squeezed three pizza ovens on top of each other. I'm a big believer in doing one thing and doing it well.”

Nightjar found a small space no bigger than a bathroom and filled it with two induction hobs, a fryer, a mounted convection oven, a sous vide and a contact grill. The bar produces tapas and, although this amounts to only 10% of its revenues, it is money it wouldn’t have had with a bowl of posh nuts. Co-owner Edmund Weil says that people don’t come to Nightjar for dinner but that he sees bar food as for grazing. Of course, if you have space then you can really go for it. That was Weil and co-owner Rosie Stimpson’s thinking behind Oriole. The focus is still drinks and music but there’s a menu here that will make you think twice about your dinner reservation.

In the industry, blinded by our own aspect, no-food bars have become accepted. But not necessarily by the customer, who doesn’t think in job roles, ventilation, revenue per square foot, rather in experience. Let restaurants be restaurants, bars be bars, but don’t be afraid to take a piece of the action by whichever means works.

That’s the business argument for food. There is also the view that food aids responsible drinking, but that’s a harder sell. So let’s leave it to Berry & Rye’s Murphy to give us the responsible purveyor’s view: “I believe that, as conscientious operators, we should be more than mere intoxicators,” he says. Hear, hear. And so, if ever an article should end with that lazy old cliché, food for thought, it is this.