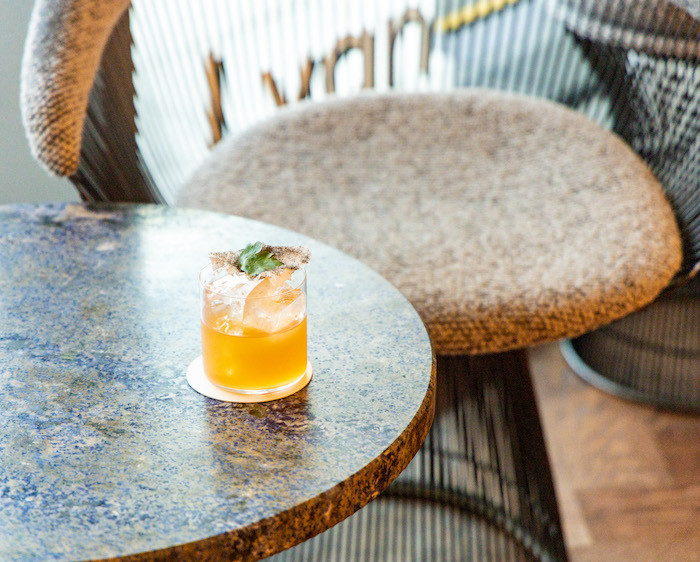 Tyler Zielinski's first in a series of pieces on new techniques and trends narrows in on koji.

One upon a time, Dandelyan’s Koji Hardshake was London’s most fashionable cocktail. The cult-favourite tipple – a moreish balance of blended scotch, cream, white miso syrup, egg white, lemon juice and liquorice bitters – received the dry shake/wet shake treatment before being served over a couple of cubes of ice in a lowball glass and garnished with a toasted marshmallow. In anticipation of the Koji Hardshake’s delectability, most in-the-know imbibers fired their orders for one before their bums hit their bar stools. Not ordering the cocktail at Dandelyan was like the bar equivalent of dining at St John restaurant and not having the bone marrow. Frankly, abstaining was a rookie move.

It was the mainstream popularity of Dandelyan’s Koji Hardshake that catapulted koji – an Aspergillus oryzae mould-inoculated grain, such as rice or barley – to the forefront of cocktail culture in the mid-to-late 2010s. The magical mould, which is a foundational ingredient in miso, soya, mirin and so on, has since been harnessed by fermentation-savvy bartenders who use koji to add a complex depth to a cocktail. “One of my favourite aspects of koji is its sweet and floral aromatics,” says Ryan Chetiyawardana, aka Mr Lyan. “At the same time, koji also has umami notes that elongate the finish of a cocktail, and a rich sweet/savoury body can give the drink an added depth. All of this is exacerbated when you use the koji to transform, and meld with, other ingredients around it.”

As contemplative as koji’s flavour may be, the challenging part is knowing how to transform the mouldy grain into a liquid fit for mixing. Just as every fruit and herb has an optimal method for flavour extraction, so does koji. Chetiyawardana recommends infusions, emulsions or washes to highlight the best characteristics of the koji, while distillates are worth avoiding because of what the method takes away from the koji’s texture and flavour in the process. But how those techniques are manipulated can vary from cocktail to cocktail, depending on the conceptual goal of the drink.

At Little Mercies, bar manager Achilleas Stavropoulos is one of the few fermentation-loving bartenders who actually maintains his own koji rig. His humidity and temperature-controlled koji nursery is used to cultivate the mould himself in an effort to manage the flavour profile of his koji. Using his own barley koji, Stavropoulos lacto-ferments the mould by blending 2 parts water with 1 part barley koji before adding 2% salt to the weight of the mixture. This blend is then vacuum-sealed in a bag and left to ferment for about a week before being frozen, clarified (by straining the liquids through cheesecloth and a chinois), pasteurised and bottled.

“I use this lacto-barley koji in a cocktail on our new menu called Banoffee,” says Stavropoulos of the cocktail inspired by the classic dessert made with bananas, cream and a thick caramel sauce, built on a buttery biscuit base [pictured below left]. “We tried to replicate all the elements of the dish, and I thought a lacto-fermented barley koji, like the one in The Noma Guide to Fermentation would be perfect to capture Banoffee’s biscuit flavour and creamy texture.” To accentuate the nutty, biscuit-flavoured base, Stavropoulos supports the lacto-fermented barley koji with a hazelnut distillate, which is then paired with rum and a fermented banana cordial. The elevated Rum Old Fashioned-style cocktail is served in an elegant rocks glass over a large ice cube.

During London Cocktail Week, Reuben Clark, bartender at Silverleaf, developed a koji-laced drink called Banana|Fig Leaf [pictured right]—a mix of banana-infused scotch, rice wine, fig leaf cordial and koji caramel. “Although koji has a delicious flavour of its own, in this case, I used the koji as a flavour enhancer,” notes Clark, who utilised koji’s umami/savoury characteristic and round mouthfeel to give the cocktail depth and length on the finish. “The actual koji flavour sits firmly in the background,” he points out. 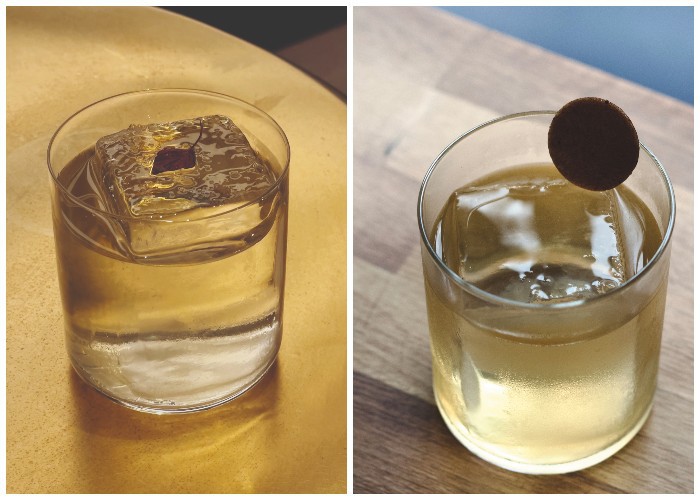 “I never intended for it to be a lead flavour, but rather a seasoning that accentuates the other flavours; much like how Angostura Bitters aren’t a dominant flavour in most classic drinks, but when it isn’t there, you can really notice that something isn’t quite right.”

To make the caramel, Clark caramelises white sugar, water and shio koji to make an umami-filled take on a salted caramel. In true Silverleaf fashion, the ingredients are always clarified via various methods to yield the clean, minimalist drink style the bar has become known for. For bartenders who aren’t planning on setting up their own koji rig like the Lyan team or Stavropoulos, shio koji is a clarified blend of rice koji, water and salt which is sold in bottles as a marinade for Japanese cuisine, making it easily accessible. But for the adventurous fermentationist, Chetiyawardana says a host of different suppliers sell a variety of koji spore styles which offer different outcomes, similar to how one would source specific yeast strains for a spirit, for example. It’s just a matter of setting up a viable habitat for the koji to thrive.

Koji can also be found on menus at other bars, such as Dinings SW3 in Chelsea, London, where a milky-blended koji adds a savoury complexity to the Gunma Espresso Martini, made with Haku vodka, Frangelico liqueur, koji and espresso coffee; and Lyaness, where koji stars in the bar’s latest innovative ingredient: the Thunder Mushroom.

Never a bar to half-ass anything, Lyaness’s Thunder Mushroom [pictured top] uses koji to saccharify a mix of grains, which is then fermented, fortified, and diluted with a blend of teas. That mix is then subjected to electrolysis using sacrificial metal to oxidise the alcohols and harmonise the mix.

The end result is fruity, chocolatey and rich with a deep umami – without being too heavy or dark. To let it shine, the Thunder Mushroom liquid features in the Hart Old Fashioned – a love letter to the expertise of Henrietta from Rare Tea Co, and Rich Hart from Hart Bakery – alongside bread bitters, Henrietta’s tea, Stauning smoke single malt and Craigellachie scotch whisky. The ingredient is the pinnacle of what a bar can do with koji.

Despite this magical mould’s prominence in the cutting-edge cocktail bar, it’s yet to fully flourish as bartenders continue experimenting with the best ways to utilise it. “I think more and more koji cocktails will definitely be popping up in bars,” says Clark. “It is an ingredient that is used at massively influential restaurants like Noma in Copenhagen and Silo in London, so it’s only natural that bartenders will begin to experiment more with the ingredient in their drinks.”

Most importantly, when it comes to mixing with koji, remember that a little goes a long way, and don’t be afraid to think outside the box. “Think about how a savoury element might temper the sweetness of a dessert-style drink, or add a layer of complexity to richer-style digestifs,” says Clark. “There can be a distinct elegance when adding subtle elements, like koji, to a drink. And, when balanced, can separate a good drink from a great one."