A short history of bartending
by Adam Jamie Hussein / 24 November, 2022 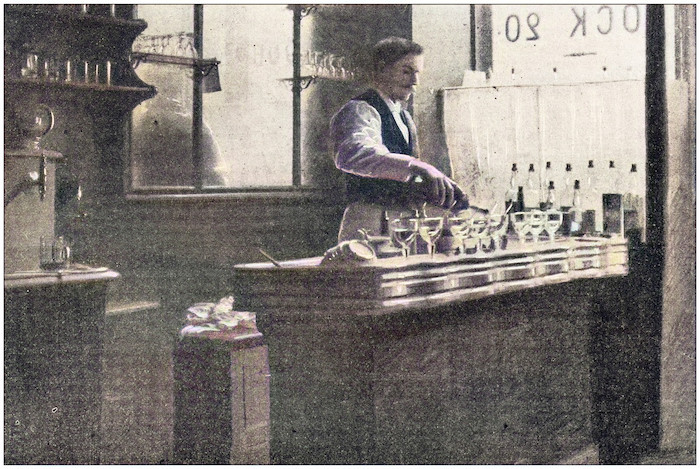 Adam Jamie Hussein’s new book, The Rise of the Bartender, charts the history of mixed drinks and their makers. Here, he provides a potted history of the profession.

While the origins of bartending are thought to date to Ancient Roman and Greek civilisations, the documented story of bartending in the UK begins with the sale of ales and wines, around the early middle ages.

These early bartenders would have run inns for travellers needing a place of rest over the course of their long journeys and would have served local brews and wines.As the centuries passed, trade and travel increased, and new ingredients, flavours and distilled spirits emerged, entering the bartending repertoire. By the seventeenth century, mixed drinks became popular in the form of punch.

Widely considered the earliest cocktail, the name punch draws inspiration from the Hindi word panch meaning five, this being the number of ingredients in its make-up - spirit, water, sugar, citrus and spice. This is the definition that was circulated during the time of the East India Company, while the first recipe dates to India in 1638 and names aqua vitae, rose water, lemon and sugar.

These styles of drinks would only increase in extravagance as new lands, peoples and ingredients were discovered and colonised. Early spirits tended to be much harsher and less refined than what we would imagine today, thus punch was the perfect way to tame them. The love of punch spread throughout England and coffee houses (as they were known) would serve it, not least because, it wasn’t taxed.

Punch would remain the drink of choice for the elite as it became a symbol of wealth. Indeed, it is said that at the signing of the declaration of independence, the founding fathers consumed 76 bowls of punch. Let me assure you, the bowl was much larger than you think. However as with most things, punch fell out of fashion as people began to have less time to sit in public houses all day drinking.

The American Revolution changed the world in many ways, and soon it would create the individualistic beverage known as the cocktail. In the late 1700s and early 1800s we start to find the first mentions of the word cocktail. In a newspaper on May 13th 1806 it is described as a “a stimulating liquor combined of spirits of any kind, sugar, water and bitter."

During this time ice was beginning to become commercially available, continuous distillation was refining spirits, making them safer and more affordable and bitters were being used in such quantities that the first cocktail(s) was dubbed a 'bittered sling'. These advancements – ice, spirits and bitters - meant that cocktails followed suit.

As ice became more accessible, American workers in the South drank Mint Juleps prior to starting work, almost like a coffee stimulus. The Sherry Cobbler would go on to promote the use of straws (crushed ice and poor dental hygiene was not an ideal mix) and the 19th century would go on to see many of the classics we know today invented by ever more adventurous bartenders.

Alas, the early 20th century Prohibition saw alcohol outlawed in the US. Though this prompted a mass exodus of bartending talent, it was to the benefit of the rest of the world, and significantly Europe and Cuba. This movement, would ultimately lead to the evolution of the high-end drinking establishments. It was the birth of the American Bar.