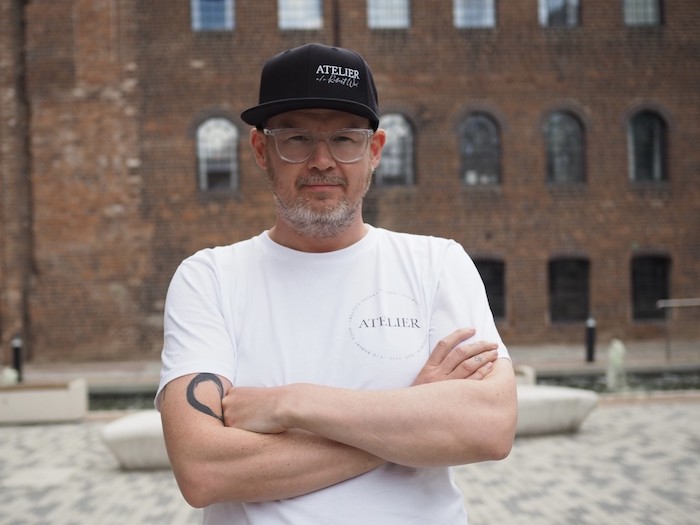 Hamish Smith catches up with Rob Wood. He’s been suspiciously quiet of late – at least, until now.

You’ve been working on something new. Tell us about Atelier.

We viewed the space that has become Atelier in September 2020, and it was love at first sight. It has, however, taken us two years of blood, sweat and tears (and delays) to get to where we are now. While the setbacks have been, at times, frustrating, it’s also given me scope to refine my vision for the space. Atelier, meaning workshop or studio, is not just a cocktail bar. It will be a multi-disciplinary space for myself, the team, and our collaborators to question and push boundaries. It’s a space for me to explore and experiment, and a place where I can invite guests to see the process, as well as enjoy whatever we create.

Now it's launched, tell us about the drinks?

The first menu is a celebration of the native pantry of the British Isles, something that’s been an interest of mine for some time. I want the freedom to explore different themes, ideas and concepts so, as things stand, I expect each menu will only be available for eight to 12 weeks, some may be around for a few days, others potentially longer, and we’ll be closed for periods in-between. Rather than a gradual evolution, each menu will be laser-focused on a specific idea and will be available for that given fixed period, before we entirely reinvent what we’re serving. The only constant will be that we create and serve drinks; the supporting artwork, photography, installations, music and unique menu designs will change to reflect my current obsessions.

What can we expect from the drinks?

Two years of research, development and contemplation have been poured into the drinks programme. There will be menus that are sleek and minimalist and some that push the boundaries. Cocktail tasting menus will feature in many of our exhibitions as we adore creating multi-course menus with a coherent progression of flavour. As with our previous venues, our drinks will rely on pre-mixed, pre-made, pre-batched and pre-carbonated drinks with no shakers in sight. Our first menu is focusing on esoteric flavours sourced entirely from the British Isles; expect sea buckthorn, gooseberries, acorn, gorse, birch, quince and oak moss as primary flavours. We will serve drinks on Thursdays, Fridays and Saturdays but for the rest of the week Atelier will act as our creative studio, working on collaborations with artists from other fields, our industry friends, and brands.

As a previous Class Sustainable Practices award winner, will this also be a focus at Atelier?

My drinks are always designed from scratch with sustainability in mind, and this won’t change at Atelier. We have a composter on site, we will be monitoring our non-compostable, non-recyclable waste on a daily basis, we’ll be analysing every gram of non-usable material, and we’ll be thinking creatively about how we reuse and repurpose. To quote Doug McMaster: “Waste is the failure of imagination.”

Who’s in the team?

Myself and my fiancée Kyndra [Vorster] are hosts. Every venue I’ve run has been with her by my side so I’m not about to interfere with the hive mind now. Atelier is also supported behind the scenes by my business partner (and long-time friend and collaborator), Alex Claridge [chef-owner at The Wilderness]. It’s a team effort and couldn’t have happened without the talented designers and creatives who really share my vision for the space and faith in the mission.

You’ve been involved with some of the top bars in Birmingham in recent years – how is this place different?

We see Atelier as the next stage in our evolution and as such it will have influences from both 18/81 and Smultronstalle before it. Atelier has a maverick and wandering soul much like its predecessors. There’s a desire for creative freedom at the heart of it and a relentless curiosity. There isn’t a destination per se, it’s about pushing the boundaries and confines of what a bar can be and seeing where the ride takes us.