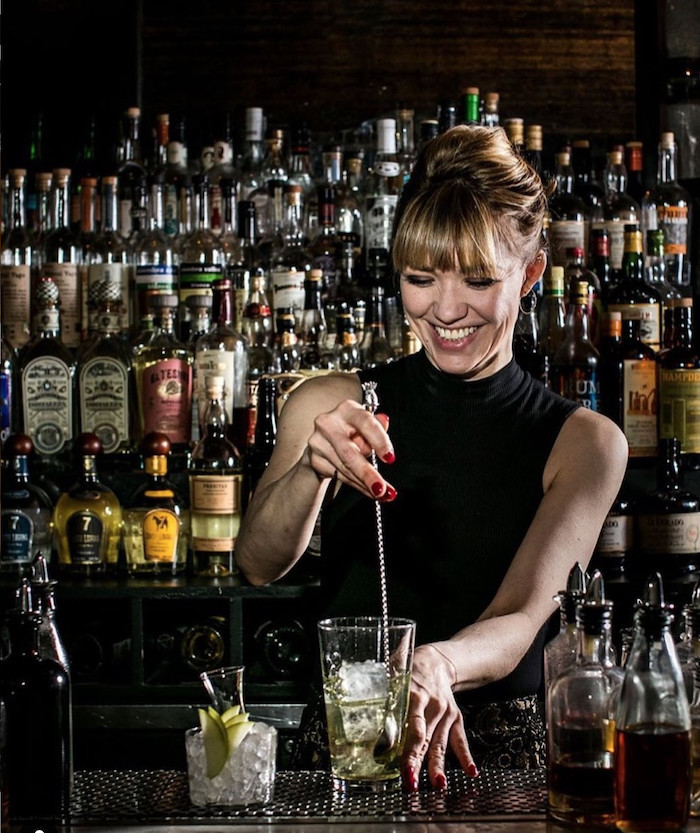 Cocktail bar and music venue The Lower Third opens on Denmark Street in Soho tomorrow, with Shannon Tebay – formerly of The American Bar at The Savoy and Death & Co NYC – behind the drinks.

Founded by music industry figures Karrie Goldberg and Tristan Hoffman, The Lower Third will open in the space of the now-closed music-industry institution 12 Bar, on the ground floor of the cavernous Outernet London site, which also houses the 2,000-capacity music venue, Here at Outernet.

The Lower Third, which takes its name from one of David Bowie’s early bands, is split into a main ground-floor bar which features a space called The Forge, and downstairs music venue the Club Room.

On arrival, guests are welcomed into the The Lower Third bar, which features stripped back wood, dark leather and warm lighting. Passing through an atrium the venue opens into The Forge, with low level tables and banquette seating, and a small stage for acoustic performances.

Downstairs, the Club Room will be a larger-capacity music venue that will serve a smaller selection of cocktails, as well as beers and wines.

The Lower Third’s distinct venues will play host to internationally recognised bands and artists, but will retain a focus on promoting local talent and giving a platform to up-and-coming artists, via both headline sets in the Club Room and solo performances and acoustic sets in The Forge.

Hoffman, a music hospitality operator, saw a gap in the market for a live music venue with high-end drinks. He told Class: “I like drinking in dive bars and rock ‘n’ roll places – they’re fun but you don’t get great drinks. Conversely, I love drinking in high-end places, but they’re not that fun. I wanted to combine those two things. Somewhere you can have a really good time – with that music element - and drink really fantastic cocktails.”

Tebay - who was recommended for the role of beverage director at the multi-venue site by mutual friend Anna Sebastian - took on the role six months ago, soon after leaving The Savoy.

“It was a match made in heaven,” said Hoffman. “For a music venue, ordinarily you wouldn’t have a beverage director of Shannon’s calibre – but I like to elevate everything. Why shouldn’t a music venue have the finesse and the approach to experience of a five-star hotel bar?”

Tebay added: “I was looking for something that aligned with my vision for cocktails. A 30 minute meeting turned into a three-hour hang out. Here we are, six months later, opening the doors to The Lower Third tomorrow.”

Boilermakers also feature, with US and British whiskies paired with a range of beers, including from Lakedown Brewery. While the wine offering sees bespoke canned wines by Boutinot Wines and bottles of natural and organic wines from independent producers.

The Lower Third is found at 26 Denmark Street, London, WC2H 8NH and is open seven days a week.