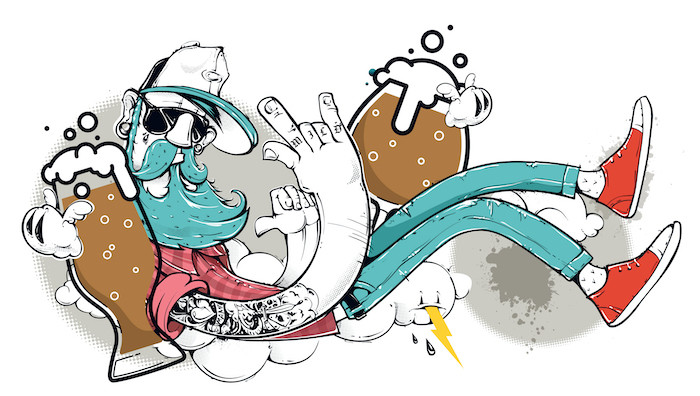 The big beer style of this year is one of the least likely Pete Brown could contemplate – nevertheless it’s one that he feels is actually worthy of revival.

Remember a few years ago, when hipster fashion was mining deeper and deeper in its attempts to stay ahead of the curve? After beards and Victorian lumberjack chic went universal, every past decade was mined simultaneously for styles that people over a certain age and waist size wouldn’t dare follow. As 90s jeans and 80s sweatshirts were combined with 30s haircuts, I remember thinking: “Surely they won’t go the whole way. They wouldn’t be mad enough to rehabilitate… the lip-slug moustache?”

Almost as soon as I had that thought, there it was on the face of every man whose trousers were too short.

Now, craft beer is getting the moustache treatment. The hottest beer style of 2022 is exploding for no other reason than that, until a year ago, it was the least fashionable beer in the world, the only style to have been completely ignored by the craft beer revolution – mild.

People used to insist that craft beer was all about the beer, that by rejecting mainstream marketing and brands, they were also rejecting style over substance in choosing what to drink.

As soon as craft beer went mainstream, this argument collapsed. Every time a beer style became popular, the geeks retreated to something they imagined to be more difficult. Damn, so you like hoppy IPAs? Fine, have them – but I bet you won’t like sour beers Oh, you do? Well, they’re so last year anyway. It’s all about pastry stouts now.

And at that point it got me. I can’t stand pastry stouts, brewed with ingredients you’re more likely to find in a confectioner’s than a brewery. Neither do I like IPAs that get their character from fruit purée more than hops, and are packaged with so much unfermented sugar that cans sometimes explode on the shelf. Awesome!

I remember from being a teenage indie fan that part of the point was choosing music your parents would hate. So as I begin to resemble a craft drinker’s parent rather than a craft beer drinker myself, I realise that squares like me are supposed to feel alienated by these beers.

But there’s a problem.

I might not like sweet, sickly novelty beers, but a lot of younger people do. We have an oversupply of craft brewers, and just like the big corporates they supposedly stand against, in order to compete, they need to brew what sells the most. So every craft beer is an IPA, and every IPA has fruit in it. And it’s all a bit dull and samey, just like the mainstream beer market was before craft came along.

The only place left for the hop craft beer geek to go was into anti-fashion.

There’s nothing wrong with mild, except that no one likes it. Last September, I was filming a TV programme on the history of pubs with Suggs from Madness, and I was asked to bring along a range of beers that reflected what people would have been drinking at different times during history. For the mid-20th century I chose mild, a low-strength, dark beer that was the most popular style in industrial Britain for the first two-thirds of the 20th century. At about 3% abv, steelworkers and glassblowers would drink up to 10 pints of it to rehydrate, and still walk home in a straight line.

From the 1970s, mild was increasingly seen as the beer your dad drank, especially if your dad was northern, working class, and wore a flat cap. As trends came and went, nothing shifted mild from its position as a beer that was last cool sometime around the Queen’s coronation. When the TV researcher attempted to buy some from a bottle shop, the owner eventually snapped and said: “Look! I’ve sold beer for 30 years, and I’m telling you there is no such beer as mild!”

That’s when I should have seen it coming.

Six months later, mild is suddenly the hottest beer style in craft. Sure, some people are chucking coffee and vanilla into it, because they can’t help themselves. But a surprising number are brewing what I guess we’ll eventually end up calling ‘normcore’ milds, to traditional recipes. There are even bespoke ‘craft mild’ festivals on the horizon.

The mild revival may be happening because hipsters have challenged themselves in the same way they did with the lip-slug moustache – let’s make a statement about the least fashionable thing we can find. But whatever the reason, I’m glad it’s happening. The geeks have outsmarted themselves – after painting themselves into a corner full of sensationalistic novelty beers, they’ve jumped into exploring a traditional beer style that deserves reappraisal. And for me, that’s what craft beer is all about.

They’re going to be so mad at themselves when they realise what they’ve done.