New bars shine as the Class Bar Awards returns
by Hamish Smith / 25 May, 2022 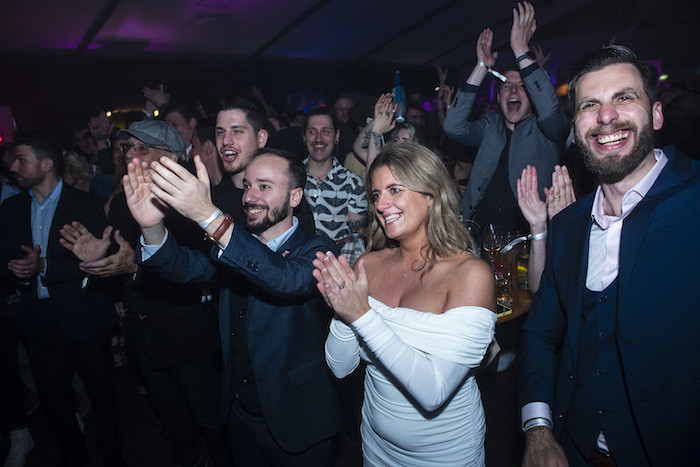 Bars that opened during the pandemic took many of the gongs at the returning CLASS Bar Awards last night, highlighting the bar industry's resurgence.

CLASS magazine announced its highly anticipated Awards at Oval Space in Bethnal Green, London, with a 650-strong audience of industry wellwishers in attendance.

A Bar with Shapes for a Name, which launched in Dalston, London last year, was up for six awards on the evening – the most of any bar - and took home the coveted Cocktail of the Year sponsored by Lanique for its highball Pastel. A simple, accessible and delicious long drink, the process behind it is anything but, involving vodka, clarified rhubarb juice, recomposed lime and Raspberry eau de vie. 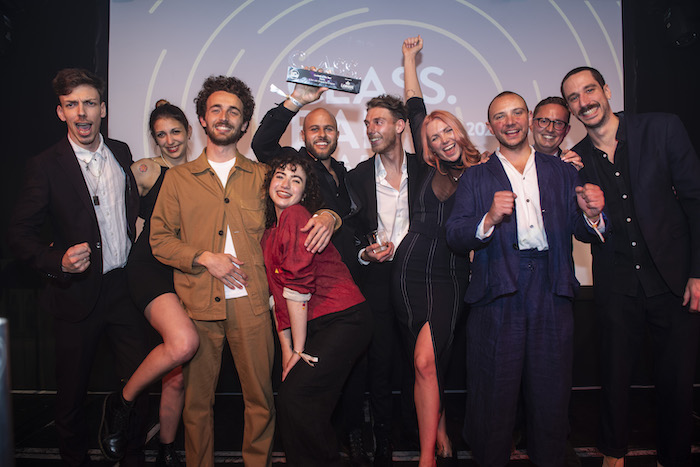 The Shapes team celebrate their Cocktail of the Year win

The bar’s co-founder Remy Savage also took one of the top individual honours, Bartender of the Year sponsored by The Busker. The former Little Red Door and Artesian bartender has become one of the stars of the London bar scene in recent years, with his free-spirited style, delicious drinks and thought-provoking concepts. His new bar – A Bar with Shapes for a Name – is styled around the school of Bauhaus which translates seamlessly to his minimally-styled, but complex cocktails.

The title of Bar Innovators of the Year sponsored by Tia Maria, which rewards bartenders and operators for their progressive work in all areas of the industry, was once again won by Monica Berg & Alex Kratena of Tayer + Elementary, London. The pair’s bar is a daily hive of innovation, experiments and new ideas put into action, driven by their sense of curiosity. They are constant and leading advocates for seasonality, sustainability and improving the working culture of bartending.

Tayer + Elementary also took home the award for Bar Food Menu of the Year sponsored by Menabrea. Something of a moving feast, dishes roll in and out of the kitchen as it plays host to a revolving bevy of chefs. This year dishes such as Takoyaki Style Prawn Croquettes and Sec Oyster with Mojo sauce, have found that balance of refinement and standing up to the bar’s flavoursome drinks.

Connaught Bar in London took the gong for Hotel Bar of the Year sponsored by Moët & Chandon. Famed for its gleaming art-deco décor, Connaught Bar has drinks that adroitly bridge classicism with modernism and the kind of service that deserves a sixth star. Its bar manager, Maura Milia, also took the title of Bar Manager of the Year sponsored by Italicus. A brilliant, attentive host with a natural warmth, Maura is also the organiser behind the scenes, orchestrating training, nurturing and empowering her team.

The award for Specialist Bar of the Year sponsored by Savoia went to Deano Moncrieffe and Emma Murphy’s Hacha in Dalston, which added a second site in Brixton last year. The agaveria offers a chic and contemporary take on Mexican décor and cocktails – not least the Mirror Margarita - a revolving back bar of 25 handpicked agave bottles and authentic Oaxacan food.

Drinks Menu of the Year sponsored by Franklin & Sons was won by Lab 22 in Cardiff. The final edition of its Research + Development trilogy of menus, Theories + Frontiers takes its cues from the future of science and invention. Beautifully illustrated, the menu combines creativity, sustainability and an inventiveness in keeping with its theme.

The title of Bar Employer of the Year sponsored by Master of Malt Trade was taken by another new launch, Pineapple Club in Birmingham, which has created a progressive work culture for its staff, recruited people in long-term unemployment and looked to address gender imbalance. 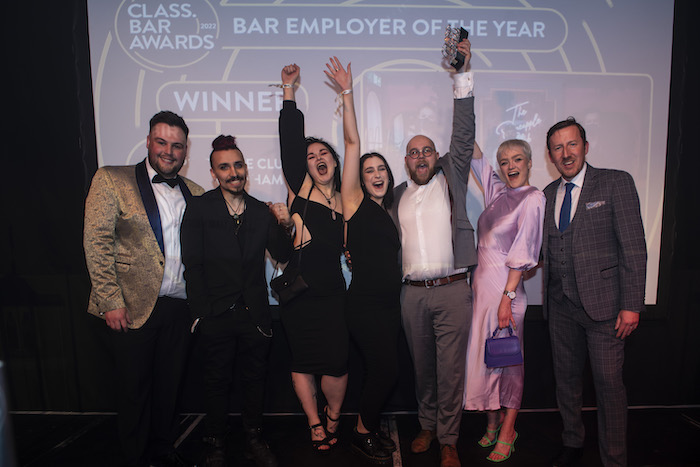 The Pineapple Club team take Bar Employer of the Year

Emerging Bartender of the Year sponsored by La Hechicera this year went to Elena Wright of Mecanica in Manchester. Elena is not only an innovative drinksmaker with a background in science but a communicator and burgeoning host.

The award for Front of House Star of the Year sponsored by Horse With No Name was won by Jacopo Correnti of Oriole in London, who has made the guest experience his craft.

Launched during the pandemic, Publiq took the gong for Sustainable Practices Award sponsored by Belvedere. Aiming to empower and inspire the local community through hospitality, Publiq has as hyper seasonal menu and champions regenerative farming, while advocating for a more sustainable supply system for urban venues.

Sister venues Nightjar & Oriole took the title for Social Media Presence of the Year sponsored by Della Vite. With a combined social media audience of a quarter of a million followers, Nightjar and Oriole engages with its customers through stunning photography and videos of its drinks making, 25-plus campaigns a year and digital events such as online gigs and livestreamed parties.

The ceremony climaxed with the Outstanding Contribution Award sponsored by Stauning Whisky which was won by Anistatia Miller and Jared Brown. Publishers, writers, educators, cocktail makers, distillers and most notably drinks historians, the pair have written 30-plus books and brought to market countless more through their publishing company. Their historical discoveries and writing around drinks have made an invaluable contribution to the drinks industry.