The story of scurvy, seafaring and the Gimlet
by Clinton Cawood / 21 April, 2022 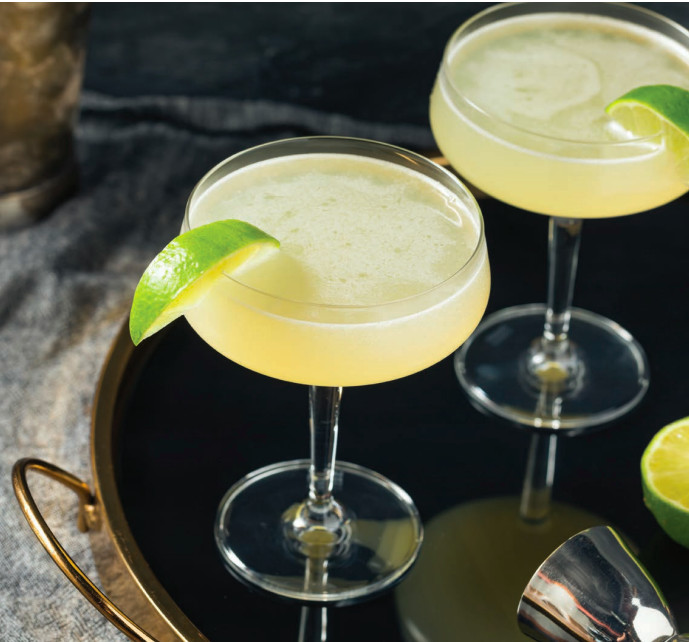 Clinton Cawood peels back the layers on a cocktail with a rich seafaring history.

We have scurvy to thank for some important 18th-century cocktail developments. If British sailors on long sea voyages hadn’t experienced this affliction caused by a lack of vitamin C, we might not have the Daiquiri as we know it today, or the Gimlet.

I’ve not experienced scurvy myself – proof of the medicinal properties of citrus-based cocktails – but its symptoms sound like enough incentive to consume a little fruit occasionally. We’re talking lethargy, fever, convulsions and malaise, whatever that is. It’s said to have killed two million sailors between the 15th and 18th centuries, but British sailors weren’t sold on the cure. They needed to be tricked into getting their recommended daily allowance through that most convincing medium, booze.

Sailors were given rum with their citrus juice, but naval officers preferred gin, and the Gimlet was born.

Scottish surgeon James Lind is credited with the discovery that citrus fruit prevented scurvy, leading to the 1867 Merchant Shipping Amendment Act, requiring ships to carry lime or lemon juice, a practice that had already become common.

Incidentally, no one was talking about vitamin C yet, as it was yet to be discovered by Albert Szent-Györgyi in the 1930s. While we’re digressing, no historical account of naval drinking is complete without the juicy etymological fact that the compulsory citrus on ships led to the derogatory name ‘limey’ being given to British sailors.

Speaking of names, there are two schools of thought regarding this nautical classic. One attributes the name to the Royal Navy’s Sir Thomas Desmond Gimlette, although the timing might not be quite right. Others think it’s named for the auger-like tool used to tap barrels on ships, referring to the drink’s flavour profile as sharp and piercing. Both stories have merit – your call.

Back to the drink, which wasn’t exactly a Gimlet until another development – the creation of Rose’s Lime Cordial. Lauchlan Rose, an enterprising Scotsman, patented the world’s first fruit concentrate in 1867, perhaps not so coincidentally the same year as the Merchant Shipping Act. In addition to keeping sailors healthy, Rose’s became an essential component of the Gimlet.

Many lament that Rose’s isn’t what it used to be, and the ingredients do vary depending on where it’s produced. If you like high-fructose corn syrup with your scurvy preventative, US-made Rose’s might be for you. Regardless, scepticism towards this ubiquitous cordial has led to modern bartenders omitting it, replacing it, making their own… but we’re getting ahead of ourselves.

The Gimlet itself is a classic cocktail in the finest tradition. Bracing, spirit-forward when made right, and without a hint of superfluous ingredient. Harry MacElhone is considered to be the first to include it in a cocktail book, in 1922’s ABC of Mixing Cocktails. He calls for equal parts Plymouth gin and Rose’s, stirred and served in the same glass, ice optional. Raymond Chandler’s 1953 novel The Long Goodbye agrees with that ratio, but most modern palates wouldn’t, and the proportion of cordial in the Gimlet has thankfully declined over time.

There are those who brighten things up with some fresh lime juice, and those who make their own cordials. But a Gimlet made wholly with fresh juice is at risk of becoming a different drink entirely.

Same goes for variations on this very adaptable classic. As Monica Berg of Tayer + Elementary, which has had its Palo Santo Gimlet on the menu since the bar opened, acknowledges: “It still needs to be recognisable as a Gimlet. We’ve played around with different spirits, aromatics, flavour notes, but always in the same direction as the original.”

Rose’s doesn’t make an appearance in theirs, and nor does it in the Gimlet twist at Silverleaf, London’s latest opening, which uses an in-house lemon verbena cordial. General manager Chris Tanner says: “We serve this ice cold and slightly sweet, much like a traditional Gimlet should be.”

Stir ingredients over ice and strain into stemmed cocktail glass