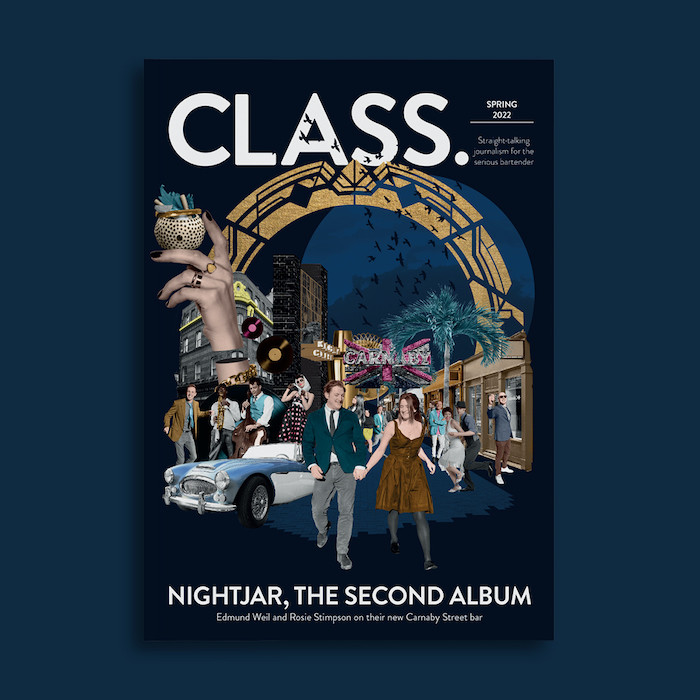 The Spring 2022 edition of CLASS has now launched and can be accessed digitally here. Not subscribed? Bartenders can sign up for a digital or hard copy here.

Entitled 'Nightjar - the second album', the spring issue of Class is lead by news - broken by Class last week - that Nightjar Carnaby is about to launch.

Rosie Stimpson and Edmund Weil’s Nightjar was a defining bar of the UK industry’s contemporary history. Whether or not they were your kind of drinks, Marian Beke and Luca Cinalli’s cocktails changed the notion of what cocktails could be. Outrageous in every sense, they were almost a reason to launch Instagram, had it not, back in 2010, already been around for a few weeks.

Perhaps less eulogised was the role Nightjar played in uniting the worlds of modern cocktails and live music. The public loved it and by now the long queue along City Street could just about be granted squatters’ rights. Nightjar’s sequel could have come any time over the past 11 years, but in a basement venue of Kingly Court on Carnaby Street – where the sounds of the The Beatles, The Rolling Stones, The Who and Bob Marley – once rung out, Nightjar Carnaby feels a judicious second album. Class has the interview on page 14.

As the industry moves into a brave new world of living with Covid, a so-called financial cliff edge lies in wait. On page seven, I look into the effects of the end of the rent moratorium, a reset of VAT and changes to business rate relief. And, as the staffing crisis endures, Ryan Chetiyawardana seeks a new approach to recruitment (p20). In the spirit of publicising the best of what we do, I analyse how the new Pinnacle Guide – a sort of Michelin for the bar industry – might work on page 18.

Columnist Anna Sebastian asks how much, if at all, our employers should influence our social media output (p24), while Mike Baxter puts his money on the future of cashless bar businesses (p26). Jake O’Brien Murphy takes a look at the subjective and somewhat comical language of tasting notes (p28), while Danny Murphy encourages us to read bar books more – he comes with a reading list (p30).

In our features, Hannah Lanfear has written what feels like an important piece about neurodiversity in the bar industry (p46) and Professor Charles Spence takes the tongue map to task – it’s really not that simple, he says on p50.

As we wait for the first harvest, the ever-resourceful Anistatia Miller and Jared Brown have been foraging for the likes of gorse flower gin, one of their early spring tipples (p44). This season also sees the announcement of our annual Bartenders’ Brand Awards (p32).

Delving deeper into their subjects are Tristan Stephenson (p52) who writes on the emerging movement of peated American whiskies, Vikram Doctor, who tells the story of Indian’s long and winding history in rum (p58), and Oli Dodd, who looks beyond the sour in his piece on pisco (p62). Laura Foster picks at the looser threads of raicilla (p56), Clinton Cawood is on The Gimlet, Neil Donachie has a guide to Newcastle and Joe Wadsack asks why in 2022 most wine isn’t vegetarian (p66).

An interview with Eric Yu, celebrating 30 years in UK bars, closes the magazine. Talking of anniversaries, Class celebrates its own landmark in 2022, but more on that later this year.