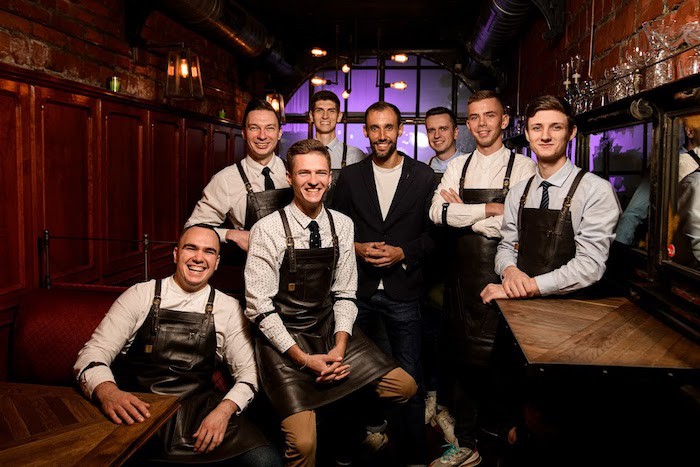 It is in the lives of normal people that war’s impact is most profound. In Kyiv, under attack by Russia from land and air, the city’s bartenders are a compelling illustration. They are everyday civilians living everyday lives that now look unrecognisable from a week ago.

In various guises, Ukrainian bartenders are joining the fight. With dark irony, some find themselves making the one cocktail outside of their repertoire. “Bartenders are helping to make Molotov cocktails – as we have the access to bottles from bars,” says Dima Shovkoplias, bar manager of Parovoz Speak Easy in Kyiv.

“There are also many bartenders among the 100,000 civilians that have joined the territorial army. Bartenders are giving blood and some bars and restaurants have opened their kitchens to feed those that need food.”

As air raid sirens sound across cities, the population goes underground. To basements, subterranean carparks, even Parovoz, Ukraine’s best-known bar. A mazy descent through the side access of a 1940s cinema, the plush, train carriage-like speakeasy is the hidden bar that now hides its staff. “It’s become a bomb shelter,” says Shovkoplias. “Some of the team now sleep there. One bartender has brought his mum as it’s safer there - it has electricity and food.”

With millions reportedly displaced across the country, Shovkoplias estimates that about half of the Kyiv bar community have left the capital, many to their home cities, to the relative refuge of smaller towns and villages. “Those that didn’t have a basement to shelter in have left. Some of the community has gone to the west, to cities like Lviv close to the Polish border.” Many others stayed, or under strict curfew, weren’t able to leave.

Shovkoplias left Kyiv hours after the first morning of bombardment. “I heard rocket attacks, so we decided to leave our home,” he says. “We took our beds and clothes and left. We closed the bar - all hospitality in Kyiv is closed; only now grocery shops are open.”

With his sister and parents remaining in Kyiv, Shovkoplias is now in the countryside around Fastiv, about 80km from the southwest of Kyiv, and just off the long road that connects the capital from the under-fire southern port of Odessa. As he speaks, airplanes and helicopters are visible, ominously flying in from the east. “I came here to my wife’s parents house, with my wife and son,” he says. “It is safer, but really nowhere in the country is safe – to some degree, the occupying army is everywhere.”

Men of fighting age – 18-60 – are no longer allowed out of Ukraine, but regardless Shovkoplias didn’t want to leave, nor did his wife and child without him. To his aid, offers of work and accommodation from the international bar community have poured in, but for now, his place, like so many, is in Ukraine.

“I will stay to defend my country,” he says. “It’s our land - every square kilometre of this country is important to us,” he says. “There are defensive points around the village and if there is fighting, I will help. We can also help the territorial army with food and supplies – we are near apple orchards. So, for the moment we don’t want to leave.”

In the first week of war, the future is second to the present. “Ukraine is more than ready to fight,” says Shovkoplias. “We have to make our voices heard. Silence only supports war.”